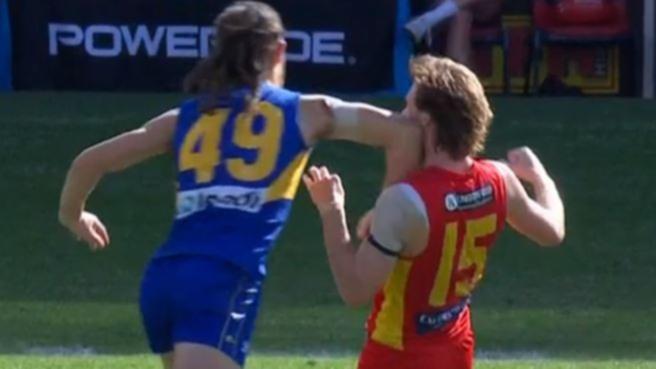 Jai Culley could be sidelined just three games into his AFL career, with the young midfielder set to come under scrutiny from the match review officer for an elbow to Gold Coast’s Noah Anderson.

The young West Coast midfielder connected his elbow with Anderson’s head on the wing during the second term, not long after the Suns star had disposed of the football.

Though Anderson continued to play, the incident is likely to see the 19-year-old suspended.

“He’ll be on the sidelines for a few weeks you’d think for that,” Western Bulldogs legend Brad Johnson said during the Fox Footy coverage.

It resulted in a free kick down the field for the Suns, who were on top of the Eagles early in their clash at Metricon Stadium.

Culley had a breakout game in the Eagles’ loss to St Kilda at Optus Stadium, finishing with 19 disposals, seven tackles and a goal in just his second game.

There’s a lot of hype around the Victorian, who was taken with the first pick in this year’s mid-season draft after impressing for the Dandenong Stingrays in the TAC Cup.

Culley had a poor start to the game, collecting just the one disposal in a first term when he was barely sighted.