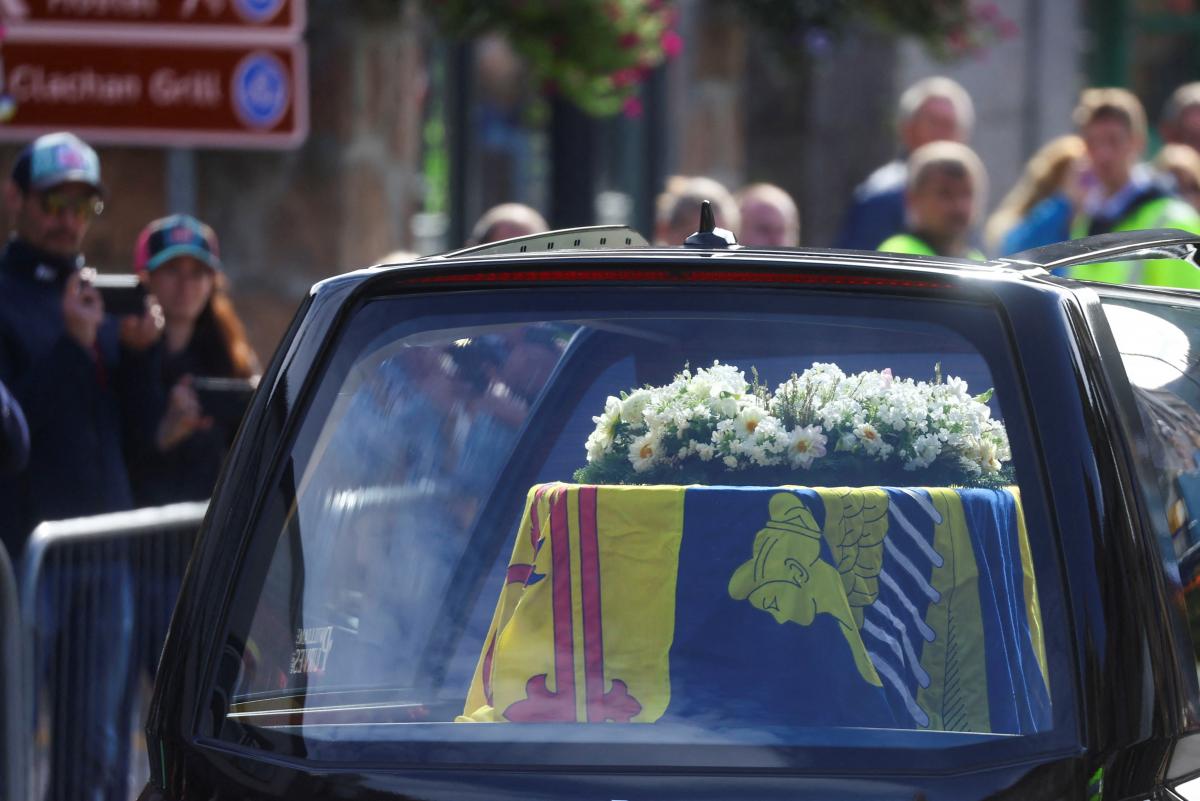 Queen Elizabeth’s coffin has began a six-hour journey from her home in the Scottish Highlands to Edinburgh, as crowds lined the roads to pay tribute to the monarch in the first of a series of solemn events leading up to her funeral on September 19.

At 10am (9pm NZT), Elizabeth’s oak coffin, which had been in the ballroom of Balmoral Castle covered with the royal standard of Scotland and with a wreath of flowers on top, was placed in a hearse by six gamekeepers.

Shortly afterwards, the hearse emerged from the gates of Balmoral to head towards the Scottish capital. The queen died at her summer residence on Thursday aged 96, after 70 years on the throne.

Her death has drawn tears, sadness and warm tributes, not just from the queen’s own close family and many in Britain, but also from around the globe – reflecting her presence on the world stage for seven decades.

Elizabeth Alexander, aged 69 and born on the day the queen was crowned in 1953, was waiting in the nearby village of Ballater to see the coffin go by.

“I think it will be very emotional for anyone saying goodbye, you don’t know how you to know how you’re going to feel when you see it,” she said.

“It’s like a family member, it overwhelms – the sadness – that she’s not going to be with us.”

The queen came to the throne following the death of her father King George VI on Feb. 6, 1952, when she was just 25. Her coronation took place a year later.

Accompanied by the queen’s daughter, Princess Anne, the cortege will slowly make its way from the remote castle, winding through small towns and villages to Edinburgh where the coffin will be taken to the throne room of the Palace of Holyroodhouse.

The slow cortege is the first of a series of events leading up to the state funeral in London. Tens of thousands have gathered at royal palaces in the days since Elizabeth’s death to leave flowers and to pay their respects.

“I know how deeply you, the entire nation – and I think I may say the whole world – sympathise with me in the irreparable loss we have all suffered,” her son King Charles said at a ceremony on Saturday.

Charles became king immediately after his mother’s death but was officially proclaimed the new monarch at the ceremony. Read full story

While Elizabeth’s death was not totally unexpected given her age, the fact her health had been deteriorating and the passing of her husband of 73 years Prince Philip last year, there was still a sense of shock at the news.

“We all thought she was invincible,” her grandson Prince William, now the heir to the throne, told a well-wisher on Saturday as he met crowds at Windsor castle.

Elizabeth’s funeral will take place at London’s Westminster Abbey and September 19 will be a public holiday in Britain, officials announced. US President Joe Biden said he would be there, although full details of the event and the attendees have not yet been released.

Before that, her coffin will be flown to London and there will be a sombre procession when it is later moved from Buckingham Palace to Westminster Hall where it will lie in state for four days.

In 2002 more than 200,000 people queued to pay their respects to Elizabeth’s mother while her coffin lay in state and aides have previously said there is an expectation that millions may want to visit.

“It goes without saying that we can expect large numbers of people,” a spokesperson for Prime Minister Liz Truss told reporters.

Truss, whose appointment as prime minister on Tuesday was the queen’s last public act, will join King Charles as both the new head of state and prime minister tour the four nations of the United Kingdom in the next few days.

Charles, 73, is now the 41st monarch in a line that traces its origins to the Norman King William the Conqueror who captured the English throne in 1066.

He is king and head of state not only of the United Kingdom but of 14 other realms including Australia, Canada, Jamaica, New Zealand and Papua New Guinea.

Elizabeth’s death has capped a difficult couple of years for the royal family, including the death last year of Elizabeth’s husband Prince Philip.

Andrew, second son of the late queen and reputed to have been her favourite child, stepped down from royal duties in 2019 after a disastrous TV interview in which he had hoped to clear his name over his relationship to the late U.S. financier and sex offender Jeffrey Epstein.

Her grandson Prince Harry and his wife Meghan stepped down from royal life in 2020 to move to California.

Harry and Meghan have been alienated from the rest of the family since, with Harry and brother William said to be barely on speaking terms. But the death of their grandmother seemed to help heal the rift, as they appeared together with their wives outside Windsor Castle to meet the crowds on Saturday.

A royal source described it as an important show of unity at an incredibly difficult time for the family.