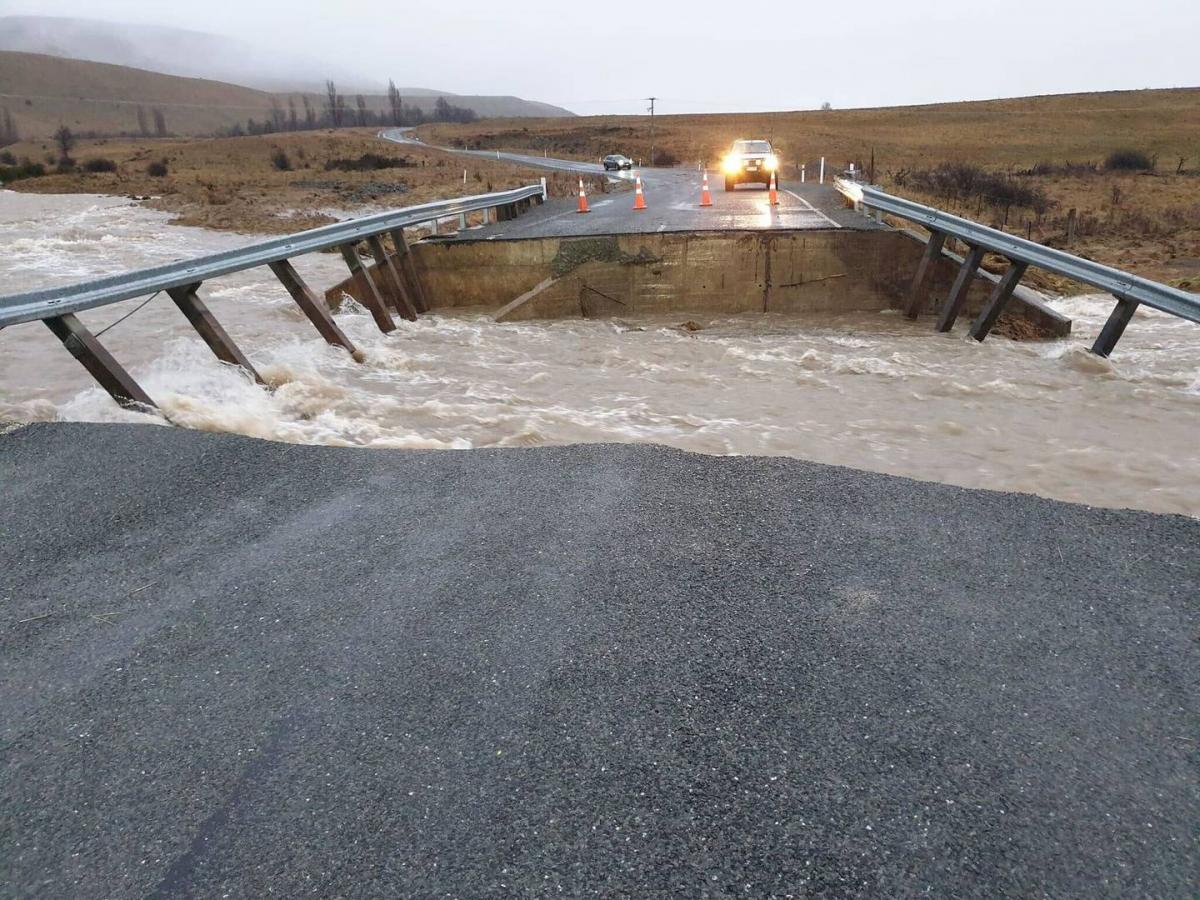 Several roads are closed and warnings are in places on many others as South Canterbury continues to feel the effects of the wild weather.

A bridge has been washed out on Lake Ohau Rd near Twizel, and there is flooding on some highways and a raft of other roads.

Waitaki District Council advised that Lake Ohau Rd is closed about 300m from State Highway 8 as a result of a washout.

“We will need to build a temporary road which will take time.  Lake Ohau village and the lodge are currently cut off and Civil Defence is now responding.

RNZ reported earlier that some properties in the Waitaki district were evacuated overnight, including the Top 10 Holiday Park in Omarama.

Sergeant Blair Wilkinson, of Oamaru, said the holiday park was evacuated at 11.20pm yesterday by Fire and Emergency NZ staff and police, in consultation with Civil Defence.

Holiday Park owner Erwin Beiboer said about 60 people were evacuated from the camp on Omarama Ave. Many guests, including his family, stayed at the Heritage Gateway Hotel across the road.

The flooding entered the park from the road side, not from the river, Mr Beiboer said.

“Within two or three minutes the whole park was basically under water,” he said.

At 9.30am today water was still flowing into the park. Mr Beiboer will inspect the units this morning but the extent of any damage will not be known until the water has receded.

The support from the community has been great, he said.

Properties alongside the Omarama Stream had to be evacuated as the stream jumped its usual course and began flowing through the lower-lying areas, the Omarama Gazette Facebook page said.

Evacuees were directed to a welfare centre set up at the Omarama Community Centre and overnight accommodation was provided for holiday makers at Heritage Gateway Hotel.

Local volunteer firefighter Richard Jopson told RNZ water had been flowing down a couple of streets in Otematata like a stream this morning.

He said about four houses had water going through them and locals worked to save other properties last night.

“One of the residents … had water lapping at the side of his brand new house and a whole lot of locals banded together and got a digger in and dug a big trench through a paddock, and we managed to divert quite a bit of water.”

An elderly couple were among those evacuated and put up at a local pub, he said, and people in neighbouring village of Omarama were also evacuated.

Waitaki mayor Gary Kircher said the rain hit the towns of Omarama and Otematata hardest, but it was easing on Tuesday morning.

People on the towns’ water supplies have been advised by the district council to boil and conserve all drinking water until further notice. This includes water used for food preparation and hygiene purposes such as brushing teeth.

The Otago Weather Updates Facebook page reports there are large rocks on State Highway 83 by Aviemore “where the bank has turned to slurry and continued rockfall likely”.

The highway is closed from Omarama to Kurow owing to flooding, and Waka Kotahi says the Lindis Pass (SH8), Haast Pass (SH6), and the Milford Road (SH94) are also closed.

Motorists are advised to take care on stretches of SH6 around Queenstown owing to flooding and rockfalls.

The Central Otago District Council has several road closures in force in the Maniototo and urges drivers to watch out for surface flooding.

The closures today come after emergency services were kept busy yesterday by a spate of wild weather which prompted callouts across the South Island.

Weather warnings issued by the MetService on Sunday were borne out as severe winds caused aircraft to be turned around in flight yesterday.

Across both Otago and Canterbury, trees were felled by gale gusts, in many cases across highways and other roads.

Skifields across the South Island, including Cardrona and Treble Cone, were forced to close for the day due to strong winds and poor visibility.

In the Young Valley catchment, near Wanaka, the Department of Conservation issued a Code Red warning and closed the area, due to fears of a potential dam burst.

The Haast Pass was closed due to fallen trees, as was State Highway94 because of the risk of avalanches.

Wind gusts of 107kmh were recorded by the MetService at Dunedin Airport yesterday morning.

Airport business development general manager Megan Crawford said eight arrivals and eight departures had been cancelled by late afternoon, with another three departures and four arrivals still to have their status confirmed.

The high winds damaged a fence, window and a billboard at the airport, Ms Crawford said.

Her trampoline had been staked to ground but she saw it go flying towards a neighbour’s house.

Worried it would land on their car, she tried to pull it back from the adjacent property.

A gust of wind caught it and she was hit on the head and her back was “a wee bit” sore.

Port Otago chief executive Kevin Winders said a big gust of wind had resulted in some containers falling over about 3pm.

No-one had been hurt, but it had caused a bit of a mess and the clean-up operation would begin today, Mr Winders said.

The wild weather had also affected the ability of pilot boats to operate safely and bring larger vessels into port. However, the impact had been minimal as there had been a light shipping schedule, he said.

A native kanuka tree was blown over at the Dunedin Botanic Garden and there was some wind damage to the printed scrim covering the Dunedin Railway Station, which would be repaired, the spokesman said.

The council had eight road closure notices in effect last night, largely due to blockages caused by wind.

Highgate resident Maurice Mitchell said the first he knew about the protected red beech tree in his front yard falling down was when a firefighter knocked on his door.

The tree caused damage to a shed and blocked a lane in Highgate.

There was a strong smell of gas in the area, which he believed was due to an old gas line running on the side of the road, which emergency services were working to locate, he said.