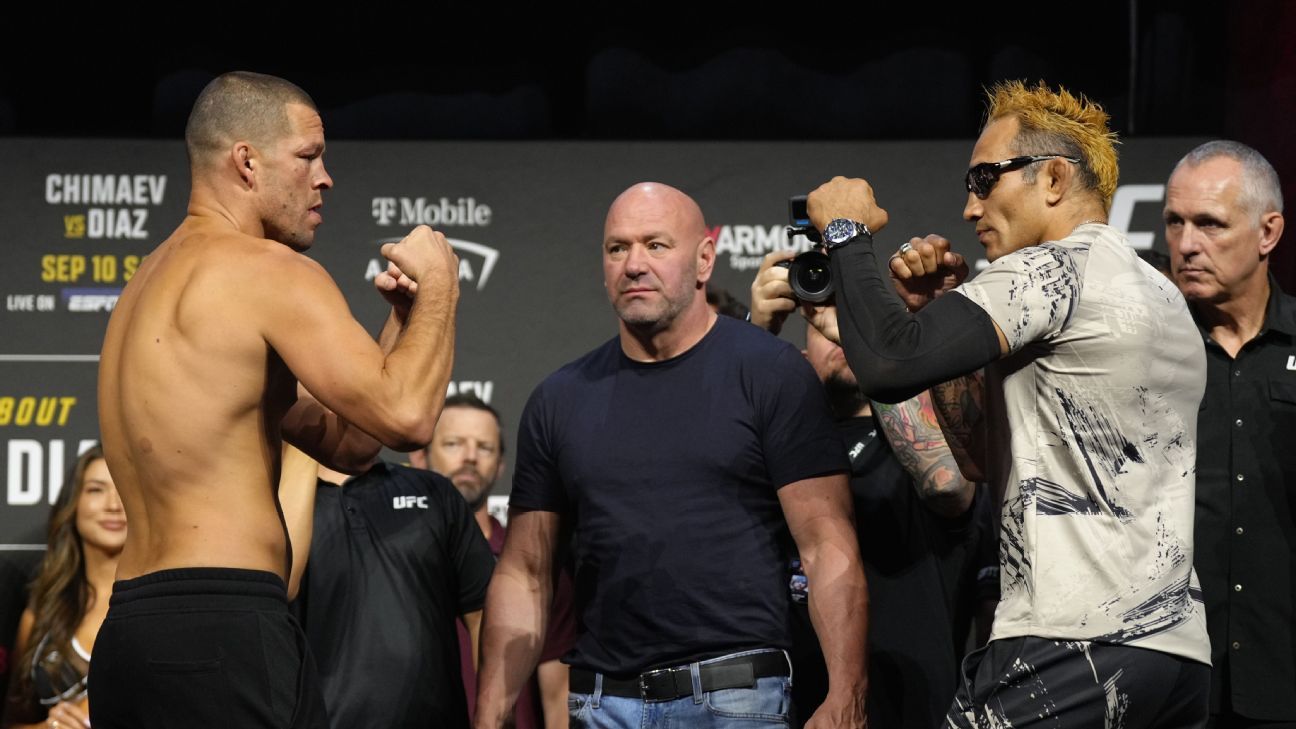 LAS VEGAS — When Friday ended, the UFC 279 main card was completely different than the one scheduled when the day began.

In an unprecedented turn of events, the top three fights set for Saturday night at T-Mobile Arena were all altered by Friday evening, a chain reaction set off by once-headliner Khamzat Chimaev missing weight by 7.5 pounds. Nate Diaz, Chimaev’s expected opponent in the main event, declined to fight someone who missed weight so badly, rather understandably.

The UFC, led by chief business officer Hunter Campbell and president Dana White, scrambled to reshape the biggest bouts until late afternoon local time. The end result? Diaz will now meet Tony Ferguson in the welterweight UFC 279 main event. In the co-main event, Chimaev will take on Kevin Holland at a 180-pound catchweight. Both bouts will be five rounds.

Diaz (20-13) is one of the most popular fighters on the UFC roster. The California native is going into the final fight on his UFC contract and has indicated this will be his final fight in the UFC, at least for now. Diaz, 37, has lost three of four, but nearly knocked out Leon Edwards — who is now the UFC welterweight champion — in his most recent fight in June 2021.

Ferguson (25-7) has dropped four in a row, most recently a knockout loss to Michael Chandler at UFC 274 in May. The California native is a former UFC interim lightweight champion. Ferguson, 38, won 12 straight fights from 2013 to 2019, tied for the UFC lightweight record streak with Khabib Nurmagomedov.

Nate Diaz returns to take on Tony Ferguson in a welterweight bout in the main event of UFC 279 in Las Vegas.

Chimaev (11-0), a rising star, was an overwhelming favorite against Diaz and the main event was set to be a showcase of his skills before he caused the drama by missing weight by so much. The 28-year-old Chechen fighter, who trains in Sweden, is 5-0 in the UFC with four finishes. Holland (23-7, 1 NC), a 29-year-old Texan, is unbeaten in three straight fights.

Also on the card, Ferguson’s original opponent, Li Jingliang, will meet Daniel Rodriguez, who originally was expected to face Holland.

It’s been a tough stretch for Walker over the last two years, but Saturday’s performance was a throwback to what once made him a standout prospect at 205 pounds.

Walker, of Brazil, tapped Cutelaba with a rear-naked choke with just 23 seconds remaining in the opening round. The finish came after Walker escaped an early armbar attempt by Cutelaba and worked his way to the back.

Cutelaba seized control early by catching a Walker kick and dumping him on the ground. However, he might have been too aggressive in his advances on the ground, as Walker scrambled to his back after escaping Cutelaba’s submission attempt.

It is Walker’s second win in his last six appearances and first by submission since 2017. Afterward, he said he’s been working his ground game in Las Vegas to finish fights on the ground and the feet. Cutelaba falls to 5-7-1 in the UFC.

Jailton Almeida pulls out the dominant victory at UFC 279 with a submission of Anton Turkalj.

Erosa hurt his opponent in the standup in the first round, showed off his grappling prowess in the second and utilized both in the final round to secure a clear decision victory. The judges gave him all three rounds, handing in 30-27 scorecards.

Erosa, who is 33 and from Yakima, Washington, has won three fights in a row and six of his last seven.

Dawodu, a 31-year-old from Calgary, Alberta, tried to play catchup but could never halt his opponent’s momentum. Dawodu, who missed the featherweight limit at Friday’s weigh-in, has lost two of his last three fights.

Whether it be at heavyweight or light heavyweight – or in this case, a catchweight – Almeida is a serious problem.

Almeida big-brothered Turkalj over the course of the first round before finally locking in a rear-naked choke submission at 4:27. Almeida took Turkalj down easily, got into mount and worked for an arm-triangle choke. When Turkalj defended, Almeida landed some ground and pound and slickly took the back and locked Turkalj in the rear-naked choke.

Almeida, 31, is now 3-0 in the UFC with three first-round finishes. The suffocating Brazilian grappler seems like someone who will have a fast trajectory in the heavyweight division. Turkalj, a 26-year-old Swede, was making his UFC debut.

Denis Tiuliulin was deducted a point after two low shots on his opponent, but he didn’t need any judges on Saturday night as he finished Jamie Pickett will ground-and-pound.

The 34-year-old from Russia scored the upset victory, his first in the UFC, after rocking Pickett with a number of short elbows. Pickett couldn’t stop his opponent’s offense and ultimately ended up on the mat with his hands over his head.

This was Pickett’s second consecutive loss. He now falls to 2-4 in the UFC.

Chris Barnett is ecstatic after his comeback win vs. Jake Collier at UFC 279.

It was a slobber knocker, a bloody brawl between big bodies, with the more damaged of them getting the finish and celebrating with a sloppy front flip.

Barnett got smashed early on, wobbled by big punches that bloodied his face, puffed up and closed his left eye and left his mouth sagging open as if he’d suffered a jaw injury. But he withstood the punishment and turned the tide in Round 2, fending off a Collier takedown attempt and securing top position himself. He then rained down big shots until the referee jumped in at 2:24.

Then Barnett did the front flip and delivered an epic postfight interview with the crowd roaring his name.

This was most fun I’ve had in long time. Wow Chris Barnett did it! #UFC279

Barnett, who is 36 and fights out of Tampa, Florida, has won two of his last three fights in the UFC. At Friday’s weigh-ins, he became just the second heavyweight in UFC history to miss the 266-pound limit; he surrendered 20% of his purse for a fight that ended up being contested at a catchweight.

Yo this is insane 🤯 that is hands down the come back of the year!!!#UFC279

Collier, a 36-year-old from Cuba, Missouri, has lost two in a row.

After the win, Barnett was transported to the hospital, per the UFC.

She couldn’t pick up her first UFC stoppage victory, but it was still a dominant win.

Wolf is a boxer with some credentials, but Dumont rocked her several times on the feet and dropped her twice in the second round. In the third, Dumont took Wolf down and landed ground and pound. By that point, Wolf was sporting a shiner on her right eye and was bleeding from the nose.

Dumont, 31, has won four of her last five fights. The 31-year-old Brazilian was coming off a split decision loss to Macy Chiasson at UFC 274 in May. Wolf, a 39-year-old training out of California, is a neophyte MMA fighter and former national Golden Gloves champion boxer who earned her way onto the UFC last year from Dana White’s Contender Series.

Alatengheili showed off potent offense and strong defense in scoring his second straight victory inside the Octagon.

The 30-year-old from China wobbled Anheliger twice in the first round with straight right hands, bloodying him with the second one, and continued to land the more damaging punches and kicks throughout. All three judges scored the fight 30-27 in his favor, giving him another victory following a stretch in which he was winless in two straight.

Anheliger, 35 and from Calgary, Alberta, saw a 10-fight winning streak end. He didn’t go down without a fight, though. Despite being hurt early and outstruck for most of the fight, he stood his ground and exchanged with his opponent, landing some shots but never one that was a difference maker.

Three late takedowns by Reed made the difference in a fight between two women who spent much of their 15 minutes in the cage together in striking exchanges.

Reed, a 29-year-old from Princeton, New Jersey, appeared to have sustained damage to her upper left leg in the third round due to Martinez’s kicks. So Reed smartly went to her grappling game to secure the win (29-28, 29-28, 29-28), her second in the UFC.

Lainesse utilized good footwork to steer clear of trouble and landed just enough offense to eke out the victory in a battle of two fighters looking for their first UFC victory.

Both fighters had difficulty getting much offense going. Weeks was the aggressor for most of the 15 minutes but could not land much on his elusive opponent. All three judges scored the bout 29-28, with two going for Lainesse.

Lainesse, a 30-year-old from Saint-Bruno, Quebec, Canada, had suffered his first career defeat in his Octagon debut in April. After Weeks’ original opponent dropped out, he took this fight on short notice.

Weeks, who is 28 and from Sedalia, Missouri, has lost all three of his Octagon bouts after coming to the UFC undefeated.