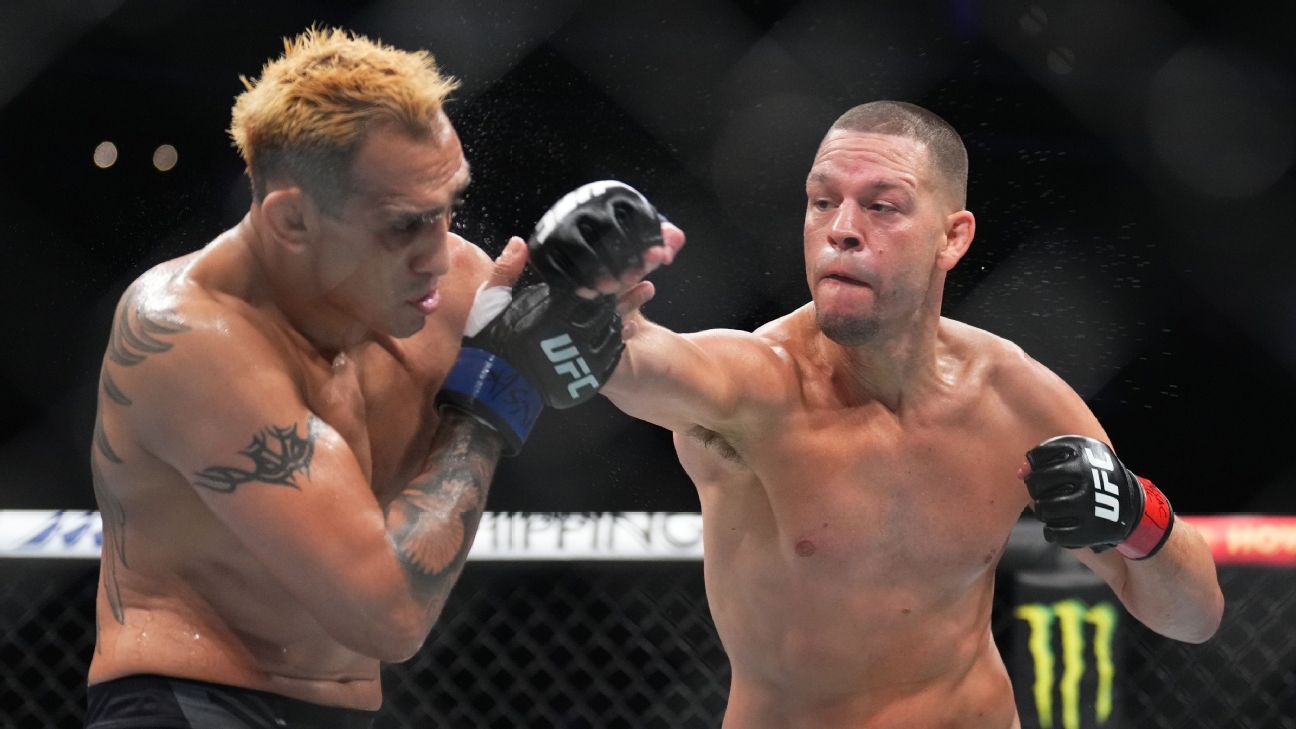 Nate Diaz dominated Tony Ferguson in a very entertaining fight in the main event of UFC 279 at T-Mobile Arena in Las Vegas on Saturday. Diaz’s striking was on point throughout the fight, and while Ferguson found success with leg kicks throughout, it wasn’t enough to stop Diaz, who ultimately submitted Ferguson in the fourth.

In the co-main event, Khamzat Chimaev demolished Kevin Holland for a first-round submission victory to stay unbeaten. Chimaev, again, didn’t absorb any significant strikes and made quick work of Holland who had a big reach advantage.

Earlier on the main card, Irene Aldana finished Macy Chiasson in Round 3 with an impressive and rarely seen up-kick to the liver, and on the prelims, heavyweights Jake Collier and Chris Barnett delivered a vintage performance, with Barnett recovering from an early Collier attack to win by second-round stoppage. Barnett then pulled off a frontflip to remember, sparking plenty of commentary across social media.

Here’s what fellow fighters and and other sport superstars had to say:

WHAT AN ENDING FOR NATE!!

This is exactly the entertainment I pay to see! #ufc279

Chimaev did quick work of Holland in the fight that was announced on Friday night. He took Holland down with ease and chased a submission from there.

A lot of unnecessary drama this week, but Khamzat Chimaev is BAD MAN! Such a special talent #UFC279

I really didn’t think it was gonna be that easy for Chimaev. Terrible look for Holland.

I always say wrestling wins fights but damn I wanted to see khamzat so more than wrestle but why does he need to?

Crazy, @KChimaev is a legend.

I’ve never seen that in the history of the sport ! #ufc279

Up kick Liver kick 😳😳😳 has that ever happened before

Chris Barnett is ecstatic after his comeback win vs. Jake Collier at UFC 279.

Fan favorite Chris Barnett not only got the victory, but his celebration post-fight was as impressive, prompting fellow fighters to react, with former bantamweight champion Henry Cejudo posting on Twitter: “A star is born.”

No matter what you say, Chris Barnett is a warrior and a fun entertainer 🤣.
Congrats man 👏🏾 #UFC279

This was most fun I’ve had in long time. Wow Chris Barnett did it! #UFC279

How can you not love Barnett #UFC279

Yo this is insane 🤯 that is hands down the come back of the year!!!#UFC279