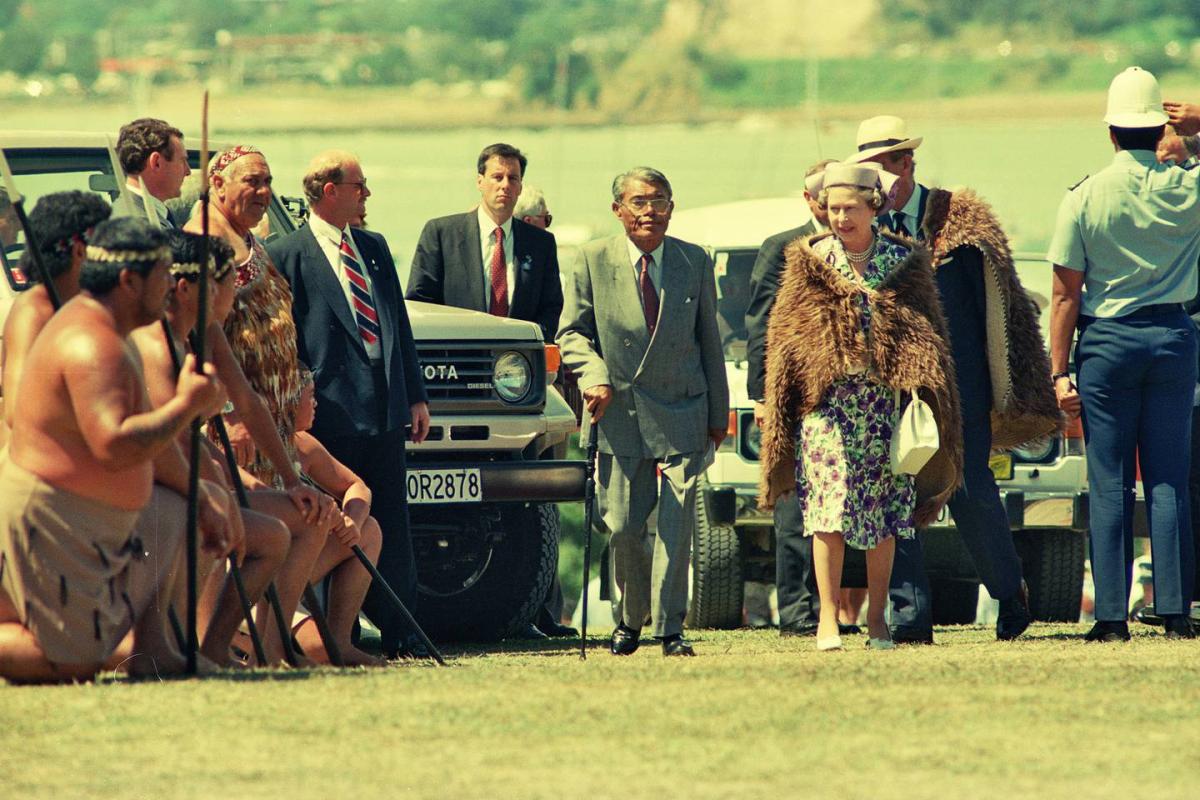 Within Maoridom the Queen’s passing is met with sadness and gratitude. Shane Te Pou reflects on Queen Elizabeth’s relationship with Maori.

Queen Elizabeth II is a direct descendant of Queen Victoria, who supported the signing of the Treaty of Waitangi. In 1995, she met with the royal family in Aotearoa and signed the Waikato-Tainui sign Deed of Settlement.

However, more importantly, she was a grandmother, a mother, and a sister.

To someone who many hold highly – you have now passed from the seen world to the bosom of Hine-nui-te-po – the goddess of night and there you feel the warmth of those who have passed.

May you forever rest in peace.

The picturesque Waikawa Marae sits at the entrance to Totaranui (Queen Charlotte Sounds) near Picton, and in February 1990, Queen Elizabeth II paid a visit. It was scheduled as part of a Royal Tour to New Zealand, her eighth as sovereign, to commemorate 150 years since the signing of the Treaty of Waitangi.

At the time of the Queen’s visit, what we would today call a “meme” had gained currency in certain sections of the New Zealand media, and even in some legal circles. The Treaty, it was claimed, did not apply to the South Island because William Hobson had declared British sovereignty over the territory prior to 1840, invoking a “right of discovery”, a manoeuvre designed to preempt French colonial ambitions.

In fact, Te Tiriti was signed throughout Te Waipounamu, at Hobson’s own urging — hardly the act of somebody who saw the question of sovereignty as settled. It was, in other words, a bogus, bad faith claim — hardly surprising given its propagators.

The Queen would have none of it, authorising a speech debunking the revisionist claims, delivered on her behalf from the paepae at Waikawa that late summer day by the then Governor-General, Sir Paul Reeves. To help draft the remarks, Sir Paul had turned to an emerging champion of South Island Maori, Tipene O’Regan.

Sir Tipene recalls: “There were judges who used to ask questions like, “how do you propose to overcome the right of discovery problem?”. It was very destabilising [but] that speech, approved very strongly by her, shut it down. It could not have happened without her quite clear command of what she was doing — and having it said under her name”.

Sir Tipene’s respect and admiration for Queen Elizabeth, despite his republican leanings, is shared broadly and deeply within Maoridom where her passing is met with sadness and gratitude.

The respect bestowed on the monarch was earned, however — and it was mutual.

As a young Queen only months into her reign, in 1953, the Queen insisted on including a visit to Turangawaewae, the home marae of the Kīngitanga movement. According to Rahui Papa, spokesman for King Tuheitia, the Prime Minister at the time, Sid Holland, made for a grumpy companion during what was scheduled to be no more than a flying visit.

“When the Queen stepped out of the car, she was invited inside the ancestral house of Mahinarangi. Not only was the invitation was accepted, but much to the dismay of the Prime Minister, it actually lasted much longer”.

“People were just so overjoyed. There were tears.”

In a subsequent visit in 1974, with Princess Anne at her side, the Queen returned to Turangawaewae, spending a whole day there, taking in haka performances and waka taua. She also bonded with Queen Te Atairangikaahu, whom she treated as a peer.

“It took that personal relationship between two women of mana, and two leaders of houses of mana, to bring that together and to create that warmth of relationship.”

Such notes of grace had a healing effect, helping restore faith in a Treaty partner that had done little to deserve it in the century or so prior to Queen Elizabeth’s coronation.

With the ascension of King Charles, Aotearoa will not be alone among Commonwealth nations to reassess our constitutional arrangements. And, while Maori are by no means monolithic on this or any other political issue, the prospect of change may sit uncomfortably among those who have witnessed the Treaty’s growing importance in our national life under her reign. It is testament to Queen Elizabeth’s life of extraordinary character and service that it is Maori, of all people, who hold out the longest to honour her legacy.