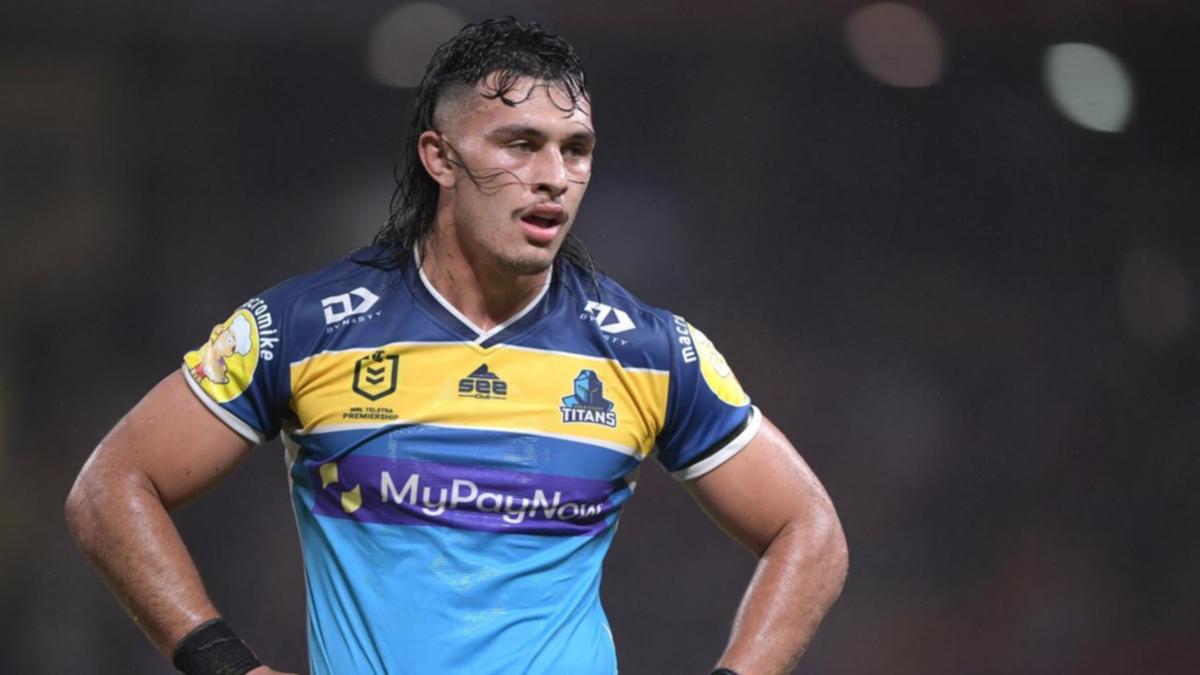 A tearful Tino Fa’asuamaleaui fears his brain-snap “short-cut” may cost him a Queensland State of Origin spot.

The devastated Gold Coast captain took the blame for another titanic capitulation from his NRL side, insisting he didn’t think he deserved to be on the team list debut coach Billy Slater will read out on Monday.

Leading 18-0 and then 24-4, the Broncos piled on 31 consecutive points in a 35-24 win that added further misery to an already nightmarish season.

Leading 24-10, Fa’asuamaleaui’s captain’s call for Jamayne Isaako to produce a short kick-off backfired spectacularly when Cory Paix beat him to the ball and busted a tackle to set up Jordan Riki for an embarrassing try.

The towering lock was otherwise magnificent, accruing 271 running metres, 129 of those after contact, and 31 tackles.

In the first half alone he racked up 203 running metres, 93 post-contact metres and 16 tackles and will surely be central in Slater’s quest to win back the shield, starting in Sydney on June 8.

Don’t try telling him that, though.

“Honestly, I don’t think I’ll be in Origin camp the way I played then, and the last couple of weeks,” he said.

“The second half, there were a lot of things where I let the boys down and it’s something that Billy and the coaching staff and the selectors will be looking at.”

Fa’asuamaleaui admitted he had misunderstood the rule and was waiting for the ball to bounce after the 40m line, rather than grab it as it crossed the line in mid-air.

“I stuffed up … it’s not good leadership from myself. It’s easy, it’s a short cut. That’s why it hurts, I let the boys down. I won’t do that again, I need to be better,” he said.

A 2-1 series defeat to NSW flattered Queensland last year given they lost the first two matches in Townsville and Brisbane 50-6 and 26-0 respectively.

“I really want to get that Maroons jersey because I feel like I owe Queensland,” Fa’asuamaleaui said.

“I didn’t play good last series and I let the state down.

“He (Maroons coach Billy Slater) is one of the best and that’s the reason I want to make Queensland because Billy is a part of it.

“I was down at the Storm with him and every time we trained, I looked up to him so much.”

Maroons backrower Capewell slapped the blue Powerade off the press conference table as they sat down, laughing that “we don’t have blue bottles in our sheds, especially at this time of year”.

Walters expects a number of his men to feature over the next month, saving special mention for wingers Corey Oates and Selywn Cobbo.

“The bloke beside me (Capewell) will be there, we should get a few in,” he said.

“It’s even nice to be speaking about it because last year we had Payne (Haas for NSW) and that was it, basically.”