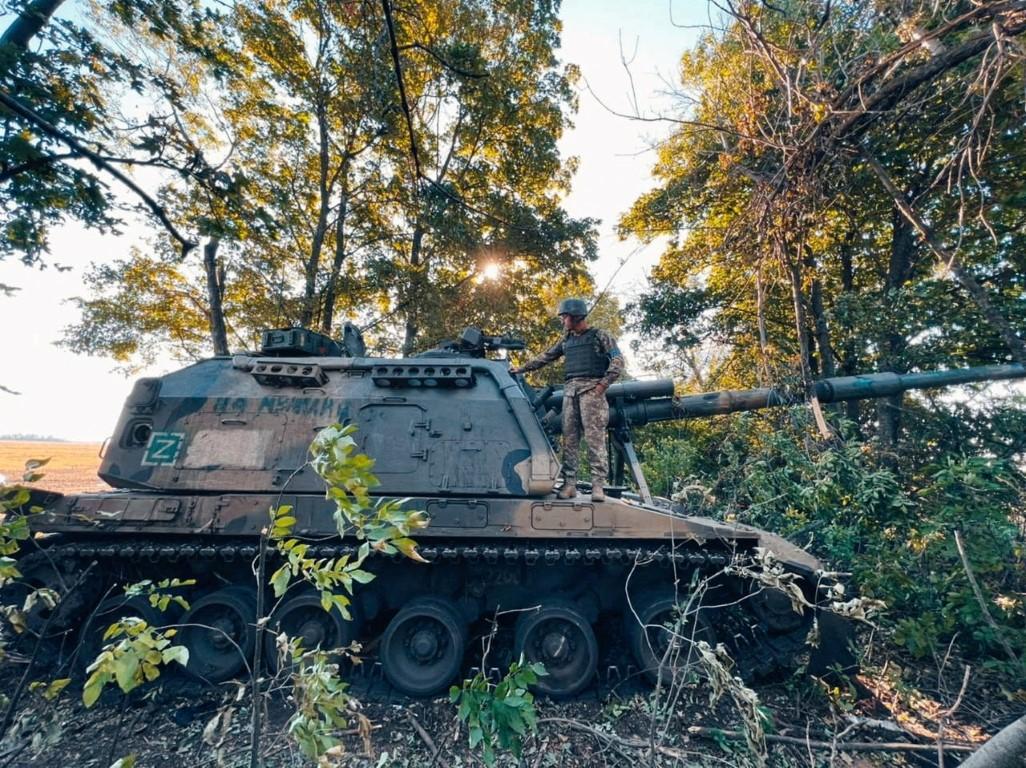 Ukrainian forces swept deeper into territory seized from fleeing Russian troops on Monday and joyful residents returned to former frontline villages, while Moscow’s shells rained down on Kharkiv, setting off fires across the region’s main city.

Ukraine’s general staff said its soldiers had recaptured more than 20 towns and villages in just the past day. President Volodymyr Zelenskiy said Ukraine’s troops had retaken 6000 square kilometres of Russian-held land since the start of the month, twice the figure given just a day earlier.

In the south, Ukrainian troops repelled attempted Russian advances in two important areas of the Donetsk region – the city of Bakhmut and Maiorsk, near the coal-producing town of Horlivka, the general staff said in an evening update.

“People are crying, people are joyful, of course. How could they not be joyful!” said retired English teacher Zoya, 76, in the now-quiet village of Zolochiv, north of Kharkiv and 18km from the Russian frontier, weeping as she described the months she had spent sheltering in the cellar.

Nastya, 28, had fled the village in April but returned last week after news of Ukrainian advances. “I think everyone’s in a great (mood). It’s all over now. At least we hope it’s all over,” she said, queuing for groceries with two small children.

Vitaly Ganchev, the Russian-installed head of Moscow’s occupation administration in what remained of Russian-held territory in the Kharkiv region, acknowledged that Ukrainian forces had broken through to the frontier.

The territory Zelenskiy said has been recaptured is a sliver of Ukraine’s overall land mass of around 600,000 square km. It is approximately equivalent to the combined area of the West Bank and Gaza.

Russia has taken control of around a fifth of Ukraine since its troops invaded on February 24.

President Vladimir Putin and his senior officials have been silent in the face of Russian forces’ worst defeat since the war’s early weeks, when they were repelled from the outskirts of Kyiv.

Kremlin spokesman Dmitry Peskov side-stepped a reporter’s question of whether Putin still had confidence in the military leadership.

“The special military operation continues. And it will continue until the goals that were originally set are achieved,” Peskov said.

Putin was later shown on state TV chairing a meeting on the economy at which he said Russia was holding up well in the face of Western sanctions.

“The economic blitzkrieg tactics, the onslaught they were counting on, did not work,” he said.

After days of avoiding the subject, Russia’s defence ministry acknowledged on Saturday it had abandoned its main stronghold in the northeast, Izium and neighbouring Balakliia, calling it a pre-planned “regrouping”.

As thousands of Russian troops pulled back, leaving behind ammunition and equipment, Russia fired missiles at power stations on Sunday causing blackouts in the Kharkiv and adjacent Poltava and Sumy regions.

Ukraine denounced the strikes as retaliation against civilian targets for Russia’s military setbacks.

On Monday, Russian strikes again disrupted power and water supply in Kharkiv itself, killing at least one person, its mayor said.

Throughout the day, shelling of residential areas and infrastructure sparked fires in the city, regional emergency services said on Facebook.

“As a result of shelling five fires have broken out. Administrative buildings and construction sites caught fire as did a number of vehicles,” they said, adding that the largest fire was in an apartment building, with about 100 firefighters on site.

Moscow, which denies targeting civilians, did not comment, while the White House condemned the strikes and pledged its continued support for Kyiv.

A senior US military official said many retreating Russian troops had exited Ukraine. Britain’s ministry of defence said Russia had probably ordered a withdrawal from all of the Kharkiv region west of the Oskil River. That means abandoning the sole railway line that had sustained Russian operations in the northeast.

Kyiv, whose troops reached the river when they seized the railway hub city of Kupiansk on Saturday, suggested the Russians were falling even further back.

The Ukrainian general staff said Russian troops had abandoned Svatove in Luhansk province, a town some 20km east of the Oskil. Reuters could not confirm the situation there.

Britain said Moscow also was struggling to bring reserves to the south, where Ukraine is attempting to isolate thousands of Russian soldiers on the west bank of the Dnipro River, forcing most Russian forces to focus on “emergency defensive actions.”

A spokesperson for Ukraine’s southern command said its forces had recaptured 500 square km of territory in the south. The situation there could not be independently confirmed.

“At the very least, we have stopped the enemy at Lyman,” he said in a post on Telegram overnight, referring to a frontline city east of Izium. He also described fighting at Bakhmut and Vuhledar further south.

Russian broadcasters have alluded to the setbacks but struggled to explain them, with commentators demanding a redoubled war effort.

“We must win the war in Ukraine! We must liquidate the Nazi regime!” one commentator said on a panel show on NTV television.

“And how many years is that supposed to take?” replied another. “So my 10-year-old children will get a chance to fight?”