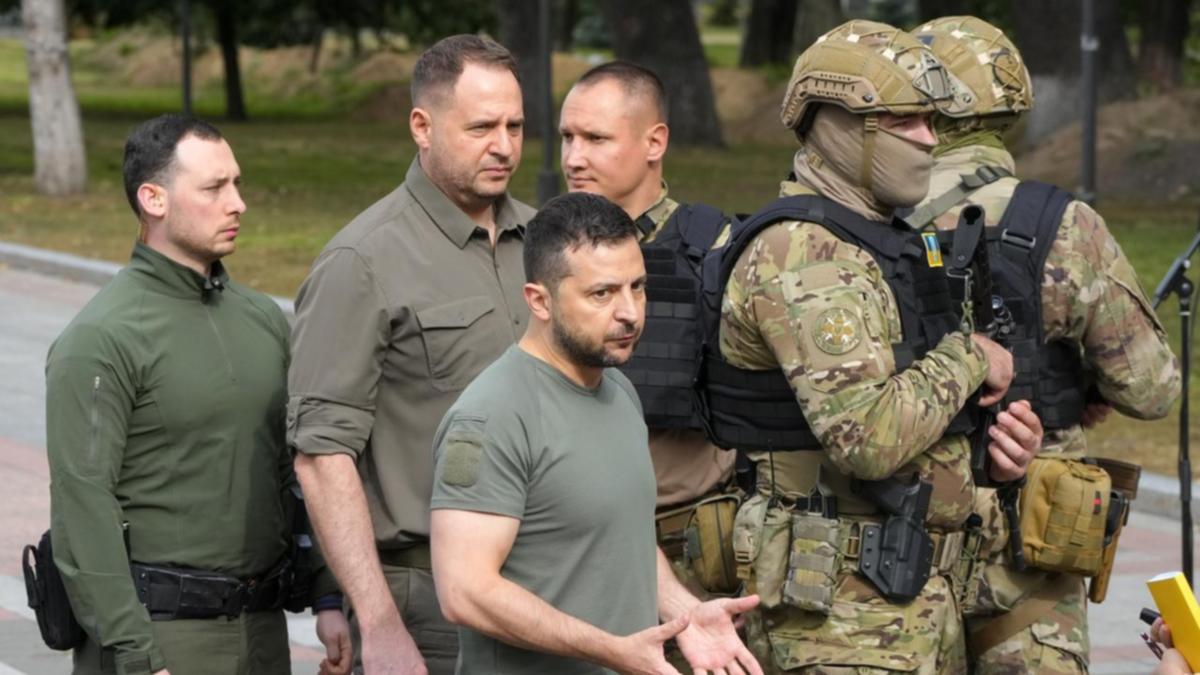 Russia has abandoned its main bastion in northeastern Ukraine, a sudden apparent collapse of one of the war’s principal front lines after Ukrainian forces moved to encircle the area in a shock advance.

The state-run TASS news agency quoted Russia’s defence ministry as saying it had ordered troops to leave the area around the city of Izium in Kharkiv province, saying they would be sent to reinforce operations elsewhere in neighbouring Donetsk.

That left thousands of Russian troops abruptly cut off from supplies across an entire stretch of front that has featured some of the most intense battles of the war.

Ukrainian forces have recaptured dozens of towns and villages held by Russia for months since bursting through the frontline earlier this week.

Early on Saturday, Ukrainian officials posted photos of their troops raising the country’s blue and yellow flag in front of city hall in Kupiansk at dawn.

“To achieve the stated goals of the Special Military Operation for the liberation of Donbas, it was decided to regroup the Russian troops located in the districts of Balakliia and Izium for the purpose of increasing efforts in the Donetsk direction,” TASS quoted Russia’s defence ministry as saying.

Ukrainian officials stopped short of confirming that they had recaptured Izium but President Volodymyr Zelenskiy’s chief of staff posted a picture on social media of grapes.

The word “Izium” means “raisin” in Ukrainian and Russian.

Izium’s sudden abandonment marked Russia’s biggest battlefield defeat since its forces were forced to abandon their assault on the capital Kyiv in March.

Russian forces had fought hard to capture the city early in the war, and then used it as the logistics base for one of their main campaigns – a months-long assault from the north on the adjacent Donbas region.

In recent days, Russian troops have rapidly abandon dozens of towns and villages after their frontline collapsed in the face of the fastest organised Ukrainian advance of the war.

In Hrakove, one of dozens of recaptured villages, Reuters reporters saw burnt-out vehicles bearing the “Z” symbol of Russia’s invasion.

Ammunition boxes were scattered with strewn rubbish in positions the Russians had abandoned in evident haste.

“Hello everyone, we are from Russia,” was spraypainted on a wall.

Three bodies lay in white body bags in a yard.

The regional chief of police, Volodymyr Tymoshenko, said Ukrainian police had moved in the previous day and had checked the identities of local residents who had lived under Russian occupation since the invasion’s second day.

“The first function is to provide help that they need. The next job is to document the crimes committed by Russian invaders on the territories which they temporarily occupied.”

Earlier, the United Kingdom’s Ministry of Defence said in an intelligence update: “A Russian force around Izium is likely increasingly isolated. Ukrainian units are now threatening the town of Kupiansk; its capture would be a significant blow to Russia because it sits on supply routes to the Donbas front line.”

Mark Hertling, a retired general and former commander of US ground forces in Europe, tweeted: “Make no mistake, (Ukraine) is executing a brilliant maneuver focused on terrain objectives to ‘bag’ Russians. But the Russians are helping them – by doing very little to counter.”

In an overnight video address, Zelenskiy said at least 30 settlements had been liberated in Kharkiv region during the advance of recent days.

“Our army, intelligence units and the security services are carrying out active engagements in several operational areas. They are doing so successfully,” he said in a video address.