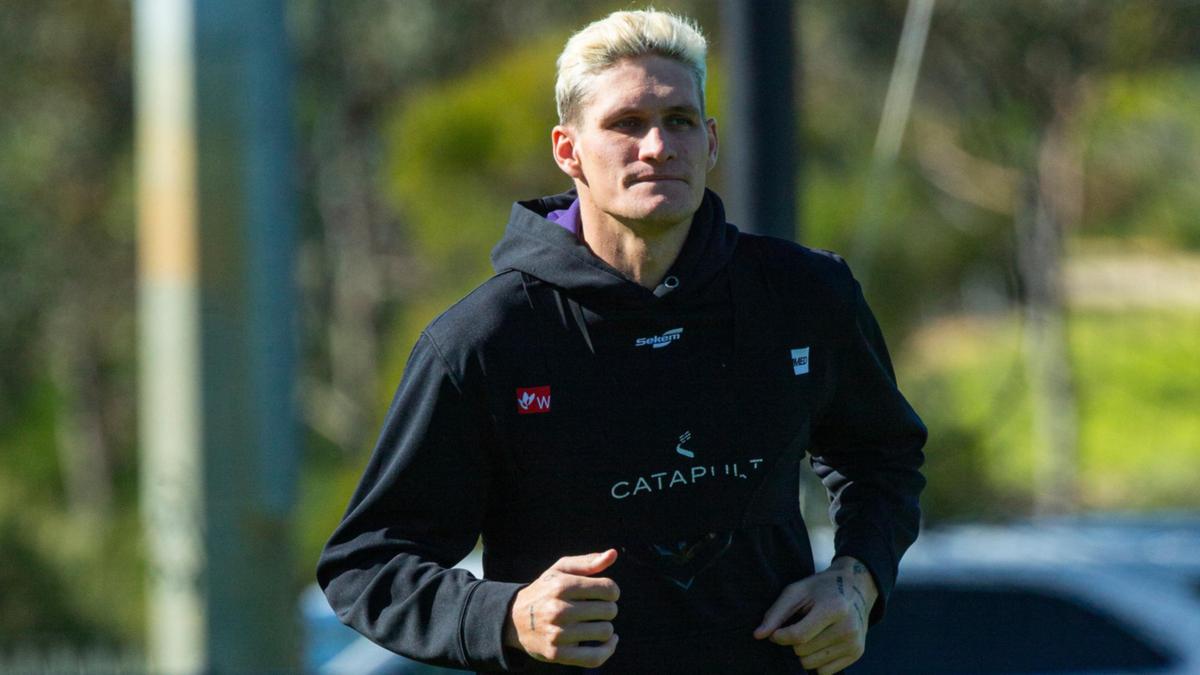 Rory Lobb is no guarantee to face his old side Greater Western Sydney in Fremantle’s top-four critical clash after struggling through training with fresh shoulder soreness on Monday.

After re-aggravating the right shoulder he first hurt against Sydney in round 18, Lobb was subbed out late in the final quarter against West Coast.

Lobb emerged briefly during Monday’s recovery session alongside his fellow forwards, walking and jogging two laps on his own before heading back inside.

The 29-year-old appeared to be favouring his right arm as he ran and has been listed as a test to face the Giants.

Fremantle coach Justin Longmuir backed Lobb to play through the pain of his “busted” shoulder for the rest of the season.

And a rest before finals appears unlikely given key forwards Matt Taberner (calf) and Josh Treacy (illness) remain unavailable and Jye Amiss is only one game into his return from injury via the WAFL.

“Rory’s been dealing with a few knocks and bruises through his chest and shoulder region, so he’ll be a test to play this week,” Fremantle high-performance manager Phil Merriman said.

“Tabs has been in the gym over the past week, concentrating on his strength and he’s started his running progression so he’s all on track at the moment.

“Josh has had a virus over the past few weeks. He’s still trying to get over that so he’s unlikely to play this week. We’re hoping we’ll see him in the short term.”

Fremantle captain Nat Fyfe remains a chance to feature in round 23 after recovering from a hamstring injury.

Fyfe trained with the forwards on Monday and while he wasn’t required to exert himself, the two-time Brownlow medallist was all smiles during some skills-based games.

“Nathan’s got to get through training on Wednesday, and if so, he should be available to play,” Merriman said.

Both Nathan Wilson (health and safety protocols) and Joel Hamling (calf) are also tests to play this week.

“Nathan Wilson has come out of Health and Safety protocols and he’ll hopefully get through this week of training and be available to play,” Merriman said.

“Joel Hamling had a bit of calf tightness last week. He wasn’t quite ready to play but the plan will be for him to train fully and play this week.”

Glendinning-Allan medallist Sean Darcy didn’t train after his derby heroics, and neither did Brennan Cox, Luke Ryan and Nathan O’Driscoll.