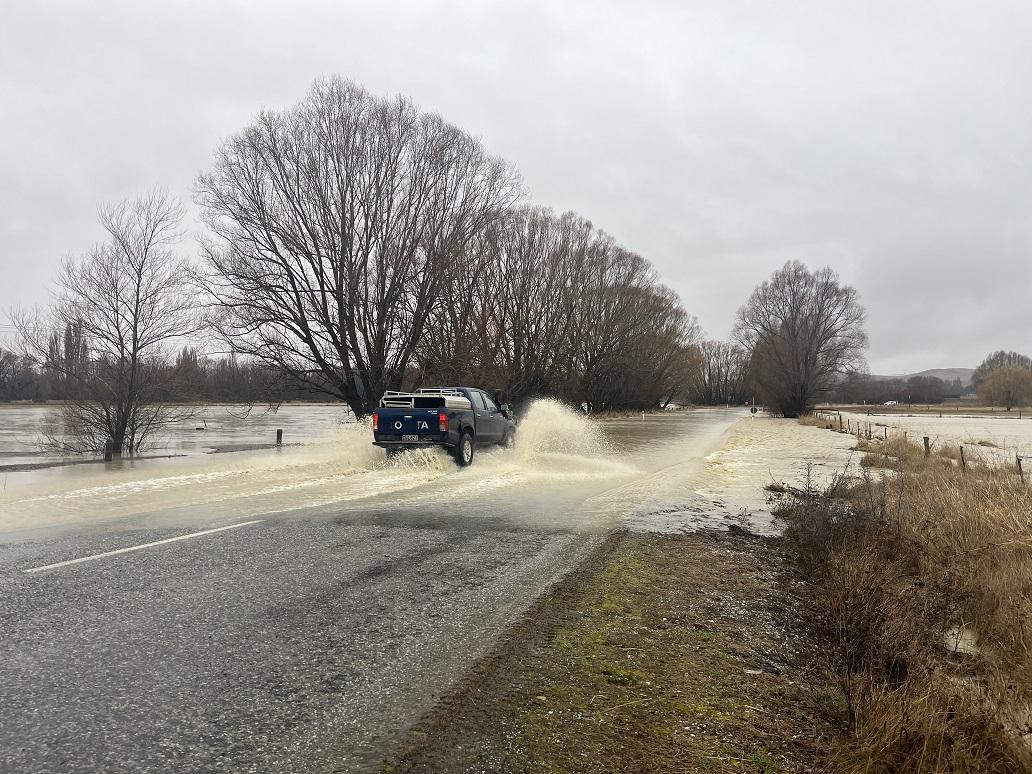 Wild weather lashing the South Island’s interior has caused widespread damage – and many roads remain closed this morning owing to slips or flooding.

The Ashburton River broke its banks and flooded some farmland, as heavy rain swelled Canterbury rivers.

Canterbury Civil Defence Emergency Management was monitoring key rivers and warned the impact of the rainfall would be seen overnight and today.

MetService forecaster Gerard Bellam said the south had “seen the worst” of the rain and today it would ease to light rain.

However, a low was deepening to the east and by tomorrow southerlies would bring cold temperatures.

Coastal areas would feel the worst of the effects and there could be large swells, he said.

There are speed restrictions in place on some stretches of highway, and closures on a raft of minor roads in the Maniototo area (scroll to bottom of story to see closures).

Meanwhile, Environment Canterbury said Meridian Energy has started spilling water into the Lower Waitaki River, and flows will increase to around 1000-1200 cumecs over the coming days. Landowners adjacent to this river should continue to monitor their own situation as some out of river flows could occur across farmland at these elevated flows.

Flows have peaked and are dropping in the Ahuriri River, Twizel River, Omarama Stream, and Otematata River. The Opihi River has peaked at Rockwood in the upper reaches, but is still rising in the lower reaches. Flows are expected to be contained within the stopbanks. However, ECan is monitoring the river in the Milford Huts area.

The Orari River peaked around 440 cumecs at the gorge but will still be rising in the lower reaches. A spokesperson said ECan staff have been monitoring the river below the gorge, and some out of river flows could occur across farmland.

The Rangitata River peaked at 4pm yesterday at the gorge at 1120 cumecs. Peak flows will take a few hours to travel from the gorge to the mouth, so the river will be flowing high into today. Overflows into the South Branch are unlikely, but ECan staff are continuing to monitor the river in this area.

The Ashburton River South Branch, North Branch, Taylors Stream, and Bowyers Stream have all peaked and are dropping in the upper reaches. The main stem is still rising at SH1, but is expected to peak at around 800 cumecs last night. Staff have been monitoring river conditions today, with overflows into farmland in some places.

The Selwyn River peaked at about 32 cumecs at Whitecliffs and is now dropping. No out of river flooding issues are anticipated in the Selwyn catchment.

The Queenstown Lakes District Council this morning advised of “a lot of water on the road between Wānaka and Cromwell, near Pisa, and you can expect this elsewhere on your journeys”. The council said motorists were likely to encounter debris on roads through the region.

Further south, the Gore District Council says the Mataura River has risen significantly overnight, and several roads are closed around the city. The river was expected to start dropping soon, and roads could reopen later this morning.

The Otago Regional Council was yesterday urging people to be cautious around rivers and low-lying land as waterways around Central Otago and the upper Clutha catchments rise.

Waka Kotahi NZ Transport Agency is warning drivers in Otago and Canterbury to be aware of slips and possible washouts on a number of routes.

An Aspiring Highways representative said a “couple of diggers had been sent to clear the road and assessments were being done between Makarora and Hawea.”

Makarora resident Jim Arthurs said yesterday weather over the past 48 hours had varied.

“We had a huge thunderstorm last night. A lot of internet routers fried, and lots of new lakes are forming on farms,” he said.

The Haast-Hawea section of SH6 was open to Makarora residents yesterday, but closed to the general public from 7am.

Updates on the Haast and Lindis Passes are expected this morning.

Last night, SH8 through Alexandra was the only route open to SH1 for northbound travel out of Central Otago.

The downpour caused roads and walking tracks to close as the Manuherikia River breached its banks near Omakau, Ophir and Galloway, flooding low-lying farmland.

A boil water notice was issued for Omakau and Ophir, and Ophir residents were advised to keep a sharp watch on river levels.

The Manuherikia River registered what is believed to be its third highest flow since 1971 — below 600 cumecs.

The highest previous flow recorded for the Manuherikia River at Ophir, since 1971, was 602 cumecs in December 1995.

The main rivers in Southland were all running above normal and there were reports of localised flooding.