The state funeral for Queen Elizabeth II will take place on Monday, September 19, at Westminster Abbey in London after the public gets an opportunity to pay their last respects to the monarch.

Elizabeth, the nation’s longest-reigning sovereign, died Thursday at her summer retreat in the Scottish Highlands.

More specific details on the 96-year old Queen’s funeral will be released later, but palace officials on Saturday (Sunday morning AEST) described the ceremony as a “a fitting farewell to one of the defining figures of our times”.

They said there would be opportunities to see the late sovereign’s oak coffin on its journey from Balmoral Castle in Scotland to Edinburgh and again in London, where her body will lie in state for four days starting on Wednesday.

The funeral will bring about “the biggest policing operation” in the UK’s history, with enormous crowds to converge outside the service, which about 2000 dignitaries and notables will attend.

Royal tradition has previously dictated funerals for British kings and queens be held at St George’s Chapel in Windsor.

However, the Queen said she wanted to break from tradition to have her funeral held in Westminster Abbey.

Many details of the funeral are yet to be confirmed, but here is what we know so far.

When will the funeral be?﻿

The funeral will take place on Monday, September 19.

In Australia, it will be early evening when the funeral starts and it is likely to extend through the night.﻿

The service will be held at the historic Westminster Abbey in London.

It is where the Queen’s coronation was held in 1953 and where she had married Prince Philip in 1947.

Queen Elizabeth II’s funeral will be the first time a British monarch’s funeral has been hosted at Westminster Abbey since 1760.﻿

Who will attend the funeral?

About 2000 special guests will be invited to the funeral.

It is expected that all senior members of the royal family will attend.

King Charles III and Camilla, Queen Consort, will be accompanied by the King’s sister, sister Princess Anne, Prince William and Kate, along with his brothers Prince Andrew and Prince Edward.

Prince Harry and Meghan are also expected to attend the funeral. ﻿

The Queen’s funeral will be livestreamed on television and online for those not invited.

Millions of people are expected to convene in London outside the funeral.

Security expert Simon Morgan, who was her majesty’s personal Protection Officer for six years, has said the crowds are expected to surpass the mammoth crowds seen for the Princess of Wales’ funeral.

He told Today ﻿this funeral will be “the biggest policing operation that UK policing have ever under taken”.

“Despite various things that have taken place in this country before, this is going to be very much off the scale,” he said.

Morgan said the Metropolitan Police service would run the massive operation which they had been preparing for over many years.

“We are going to have so many dignitaries in one place at the same time, so we have a very big security role in relation to them.

“We also have a very large public safety role where all of these people are going descend on London and they are going to wish to pay their respects in turn when the Queen lies in state for three days and then for the funeral itself.

“It is going to be a massive operation for the police.”

How will the funeral run?﻿

The Queen’s coffin will be moved from Westminster Hall to Westminster Abbey on the day of the funeral.

It is expected the funeral will begin about 10.50am (local time) and will finish about 12pm.

What happens after the funeral?﻿

After the service, a gun carriage procession will take the coffin back past Buckingham Palace, arriving at Hyde Park Corner about 1pm.

The coffin will then be moved on to a hearse and begin its journey by road to Windsor Castle, where a committal service will be held at St George’s Chapel about 4pm.

At the end of this service, the coffin will be lowered into the Royal Vault.

A private burial will be held with the King and other members of the royal family that evening and the Queen will be laid to rest.﻿

The day after the funeral flags across the UK will be returned to full-mast and the national mourning period will begin.

The time will be determined by the British Government. 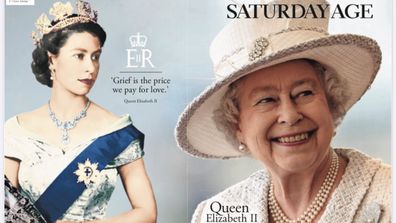