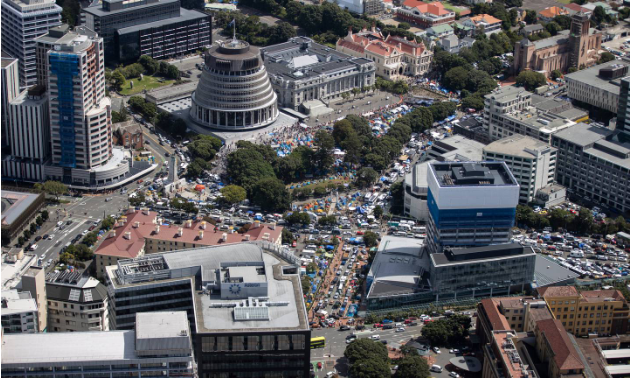 Police have moved to start clearing up the roads near Parliament in Wellington, where protesters have for over a week clogged the roads with vehicles.

Some streets around Parliament could not be used since people protesting against Covid-19 vaccine mandates clogged the roads with their vehicles, with public transport in the capital also having to be re-routed.

On Thursday, police estimated more than 400 cars, vans and campervans were ensconced in several streets alongside Parliament.

The protest, which began on 8 February, drew a crowd of more than 1000 people today.

Yesterday, Police Commissioner Andrew Coster said they were expecting more people to turn up to the protest over the weekend, and that they would implement a traffic management plan.

Despite police previously warning protesters to move their vehicles or face towing, they did not end up acting on the ultimatum, fearing an escalation.

In a statement, police said there was an increase of people attending the protest today, as was anticipated, and an estimated 800 vehicles were still unlawfully parked.

“Police cleared illegally parked vehicles on Thorndon Quay today – 15 were moved by protesters after police spoke with them and two were towed.

“Police are also noting the registration of vehicles currently impeding traffic for follow up enforcement action, and structures such as tents and marquees are being removed from any site that does not form part of the main protest area.”

The cars were parked in the median strip in the middle of the road, and appear to be relocated to the side of the road.

Over a dozen police cleared traffic in the area and directed pedestrians to move away, when a small crowd began to gather.

Further up the road, traffic cones with ‘no parking’ signs have been laid down the curb of Bowen Street, where many cars remain illegally parked.

Police said the parking facility at Sky Stadium was at capacity, after they had previously encouraged protesters to move their vehicles there.

But they said they had “serious concerns” about health and safety as a concert at the protest site has been planned.

“We continue to maintain a highly visible, reassurance presence on site, and staff are engaging with the public and protesters to provide advice and, where necessary, take enforcement action.”

Police said they have attended at least six medical events within the protest and continued to urge anyone parked unlawfully to remove their vehicle to allow emergency services access.

Business and community leaders have been calling for an end to the blockade, saying it was adding stress to nearby residents and users.

Meanwhile, Marlborough Mayor John Leggett said protesters in Picton have made it clear they would not be moving until their counterparts in Wellington do.

Leggett said the council had been in contact with leaders of the action in Nelson Square, who have made their position clear.

He said the Picton occupiers were linked to the Wellington anti-mandate protest.

“To put it the other way, if Wellington [protest] is resolved, we will get a resolution here, a peaceful resolution, and they’ve made it very clear that their occupation is linked entirely to what’s happening in Wellington so there needs to be some way of resolving the Wellington situation.

Police today said they were also maintaining a presence at that protest, as well as another one in Christchurch.