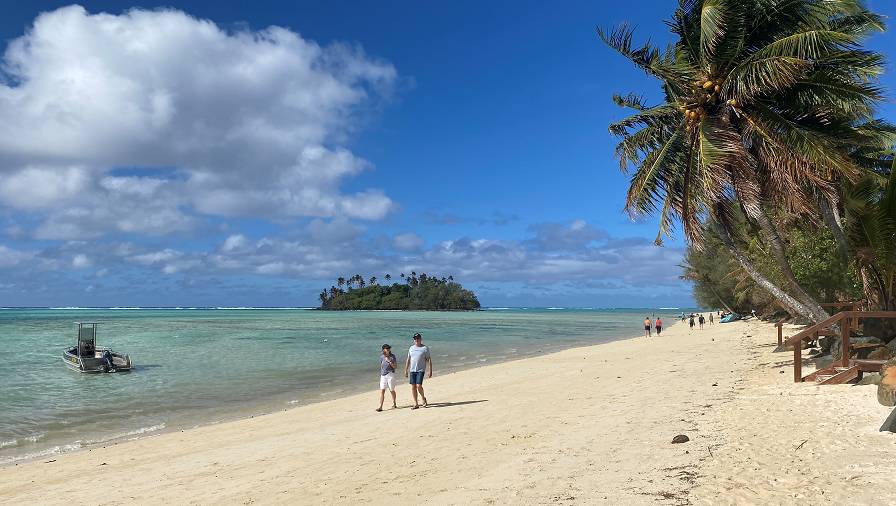 Twelve middle-aged women in a beach house for a week, what could go wrong?

Actually, nothing, we had a fab time in balmy Rarotonga partaking in all manner of activities from snorkelling with turtles to watching whales breaching beyond the reef from the comfort of a waterfront café.

The Cook Islands tourism sector is roaring back into life after the devastation of Covid, with the government further easing the way by dropping the vaccine requirement for travellers last week.

Planes are at capacity, couples are once again getting wed on the beach, and the ladies’ desire for a twilight cocktail cruise in an electric Tuk Tuk went unfulfilled as the tours are booked solid for a month. (Probably just as well.)

It will be welcome relief for the tiny nation of 17,000 which was forced to take on $130 million of new debt to get through the pandemic, 23% of which has come from a Chinese development bank.

China’s increasing presence in the Pacific is a touchy subject at the best of times and the Cook Islands has a long history of accepting Chinese funding for projects including an impressive courthouse and sports stadium.

In 2011 it sold a clutch of licences to China to fish within its exclusive economic zone (EEZ) for just under $1m a year, a deal that clearly still rankles with locals.

Although in 2017 it created the Marae Moana multiple-use marine area, establishing protected zones around each of its 15 islands and allowing for sustainable commercial fishing and mineral exploration elsewhere in the EEZ, Cook Islanders complain that Chinese fishing has stripped their waters of stock.

Certainly, for an island in one of the world’s most bounteous oceans, there is a distinct lack of fish in Rarotonga’s restaurants.

Too many fishing boats, not enough fish

With very few Pacific countries having the ability to catch and process their own fish at scale, it is common for them to capitalise on the resource of their EEZ by selling foreign licences.

The Cook Islands has set up marine protection zones around its 15 islands.

There are various measures to bolster Pacific nations’ cooperation and ability to sustainably manage their waters – the Cooks’ fisheries are administered under arrangements set by the Western and Central Pacific Fisheries Commission, of which China is a member, for example.

In a nutshell, there are too many fishing boats and not enough fish.

Since 2012, the Chinese Pacific fishing fleet has grown by more than 500%, with numbers of Chinese-flagged vessels far outstripping those of any other country operating in the region, The Guardian reported last year.

Having depleted fish stocks in its domestic waters and encouraged by subsidies, China’s distant-water fishing fleets are travelling further and further afield.

The Chinese fleet is estimated at between 1600 and 3400 vessels, although the London-based Overseas Development Institute says the actual figure is likely to be up to eight times higher.

Illegal, unreported, and unregulated (IUU) fishing is a big problem in the region.

A paper published by the Pacific Islands Forum Fisheries Agency​ estimated that $497m​ worth of tuna was either captured or transhipped illegally each year between 2017 and 2019.​

China may be the worst offender but it’s not the only one, including other Pacific states.

The loss of so much fish has long been a drain on the economies of small states without any other exports, never mind the damage it is doing to the global environment.

You can’t blame the Cook Islands for wanting to earn a buck.

With tourism accounting for two-thirds of its economy, Covid-19 was a wake-up call for it to be more proactive in looking for other sources of income.

However, its latest effort to secure valuable export dollars is another political and environmental hot potato.

In March, the Cook Islands approved deep-sea exploration licences for three overseas companies to investigate whether mining for polymetallic nodules is viable.

An estimated $237 billion worth of the nodules are to be found six kilometres down on the ocean floor, particularly around the northern Pacific Islands.

But scientists have warned that mining them would inflict long-lasting damage on delicate ocean ecosystems.

If letters to the Cook Island News are anything to go by, its government’s move is highly controversial, with critics arguing the exploration will be done only to justify mining.

Last year, car companies including Volvo and BMW signed up to a World Wildlife Fund call for a moratorium on deep-sea mining, while other Pacific territories including Fiji and French Polynesia have called for a temporary ban until the effects are better understood.

It respects the right of Pacific nations to make their own decisions regarding the sustainable development of resources, the Cook Islands Seabed Minerals Authority sniffed.

The Pacific Islands are our cultural and environmental backyard.

Not all is doom and gloom in the Pacific, with slow steps being taken to help protect its economic and environmental wellbeing.

In June, after two decades of work on the issue, the World Trade Organisation struck an agreement to reduce subsidies that contribute to overfishing.

It is only the second multilateral agreement in the global trade framework that the WTO has ever achieved, and sees members undertaking not to grant subsidies for vessels or operators involved in IUU fishing.

Neither has New Zealand abandoned its self-governing associated state.

In November, Foreign Minister Nanaia Mahuta announced another $100m in Covid-19 recovery and economic support for the Cook Islands and Fiji, comprised of $40m for the Cooks and $60m for Fiji.

This comes on top of an earlier $115m in support for both nations.

Visiting Rarotonga is like the tropical version of a Kiwi bach holiday, with its laid-back attitude, good standard of living relative to other Pacific nations, and the familiarity of its Polynesian culture.

Cook Islanders are whānau, and standing firm alongside them in the face of growing environmental threats and Chinese debt trap diplomacy needs to be a key foreign policy setting for New Zealand going forward.

With the prospect of a changing of the guard at next year’s general election, New Zealanders should be asking the policy-light National Party what its stance on the Pacific is.

The idyll of palm trees and alabaster beaches belies the geopolitical storms brewing in our cultural and geographical backyard.

Maria Slade is a senior journalist with NBR.