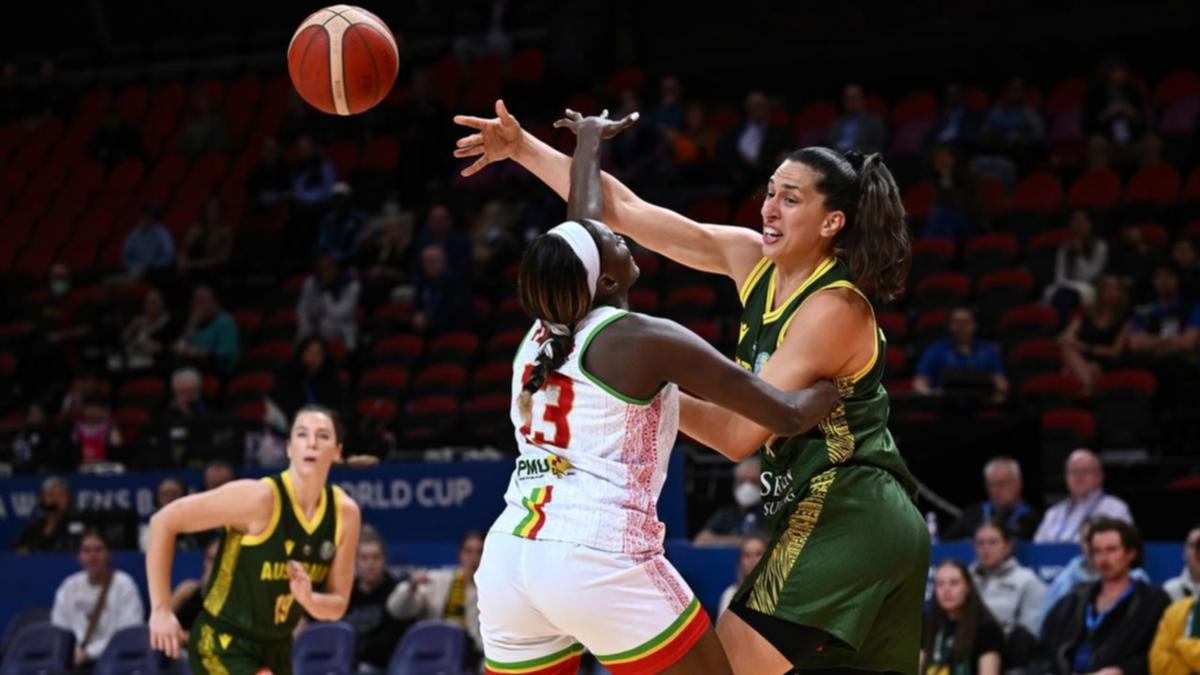 Australia have shaken off their shooting woes to post a dominant 118-58 win over Mali that has put their FIBA Women’s World Cup campaign back on track.

The Opals are now 1-1 and likely need to win at least two of their last three games to guarantee a quarter-finals berth.

The size of Friday’s win at Qudos Bank Arena in Sydney could also prove vital, given for-and-against may be the difference between making it through the competitive Group B and leaving the tournament early.

Against Mali, the Opals came within one point of their highest-ever score at a World Cup game, posted against Malaysia in 1979 when Lauren Jackson’s mother was on the team.

“It was a great hit-out for us,” Opals coach Sandy Brondello said of the win over Mali.

“I thought we came with the appropriate toughness and a little bit more poise.”

The lowest-ranked side at the tournament, Mali only worried the Opals in the opening exchanges, racing out to a surprise 10-2 lead as the hosts struggled for both energy and accuracy.

But the Malians were prone to fouling and the hosts punished them from the stripe. Eight separate players sunk free-throws, contributing 20 points to the Aussie total.

The Opals were especially prolific from beyond the three-point line, shooting at 55 per cent.

Australia managed to shoot with only 26.1 per cent accuracy from the field against France but improved that stat to 56, with seven Opals scoring over 10 points.

In defence, they used their size advantage to frazzle Mali, who never rediscovered their early mojo.

“We got off to a slow start but once we got through those post-game one jitters, we hit our stride,” said Opals centre Marianna Tolo.

“We were able to get our flow and get some great looks from the three-point line and inside as well.”

In her second game back for the Opals, basketball legend Jackson helped steady the ship after Mali’s early surge.

Jackson and Tolo each sunk a pair of free-throws shortly after being injected into the contest but once the Opals had built an unassailable lead, the 41-year-old was given an early mark.

The Australians had plenty of strike across the court without her.

Young gun Ezi Magbegor stood up with 15 points after a quiet showing against France, while Cayla George and Tess Madgen went into entertainer mode with four triples each.

Australia’s win lifts them into the logjam in the middle of Group B. Four of the pool’s six sides have started the tournament with a win and a loss.

All six have a rest day on Saturday, the Opals then face Serbia for their next assignment the following evening.

“Every game is going to be tough,” Tolo said.

“It’s going to come down to the wire so we just need to take it one game at a time and that starts with Serbia.”

At close of play after day two, only China, Canada and the USA remain undefeated.

Canada posted a gritty 59-45 defeat of France to move a game clear atop Group B and close in on a spot in the knockout phase.

The USA brought Puerto Rico back to earth with a 106-42 thrashing that set the stage for Saturday’s heavyweight tussle with China.

Serbia lost two of their biggest stars to retirement in the months before the World Cup but opened their account with a 69-64 win against reigning Olympic silver medallists Japan.