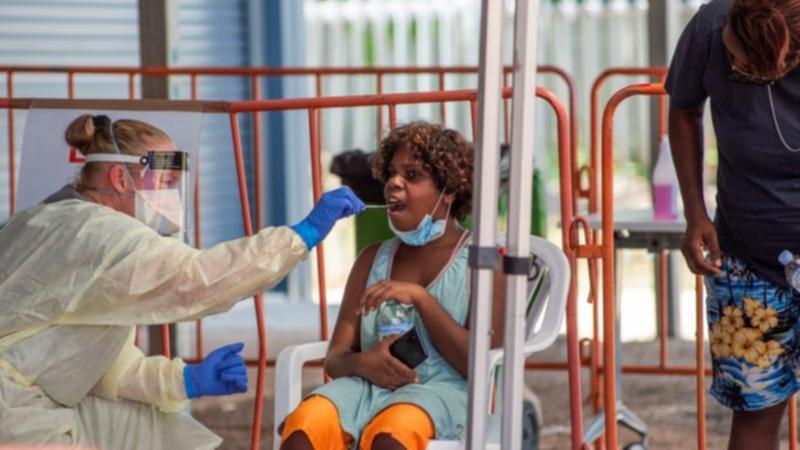 A child from a Tennant Creek town camp and a teenage girl from Katherine are among the latest community cases.

It brings the current community outbreak to 125 cases, with more expected in Indigenous communities where vaccination rates remain low.

A lockdown in Tennant Creek and Ali Curung Indigenous community, 380km north of Alice Springs, has been extended by 24 hours to 5pm on Thursday.

People in Alice Springs have been ordered to wear masks in indoor public areas until 5pm on Christmas Eve as the mask mandate in the Barkly region is extended by 24 hours.

“We are very mindful it is Christmas and a lot of people have a lot of work to do to prepare,” Acting Chief Minister Nicole Manison told reporters on Wednesday.

The outbreak started when an infected woman illegally entered the territory in late October.

The 21-year-old was fined for lying on her border entry form as the virus spread from Darwin to Katherine, 320km south of the territory capital, and multiple Aboriginal communities.

Meanwhile, two men on two flights from Sydney have also been diagnosed with the virus after arriving in the territory.

It comes as the NT government eases testing requirements for interstate travellers to the territory.

A health directive had required travellers have a PCR test within 72 hours of arriving in the territory and on the sixth day after arriving.

But that was relaxed, with travellers now only required to take a self-administered rapid antigen test.

This will ease the workload on health staff processing tests and take pressure off national resources, Ms Manison said.

Travellers will still have to show evidence of a negative PCR test 72 hours before arriving in the NT.

A pilot program for infected fully vaccinated people to quarantine at their homes in Darwin and Alice Springs has also been launched.