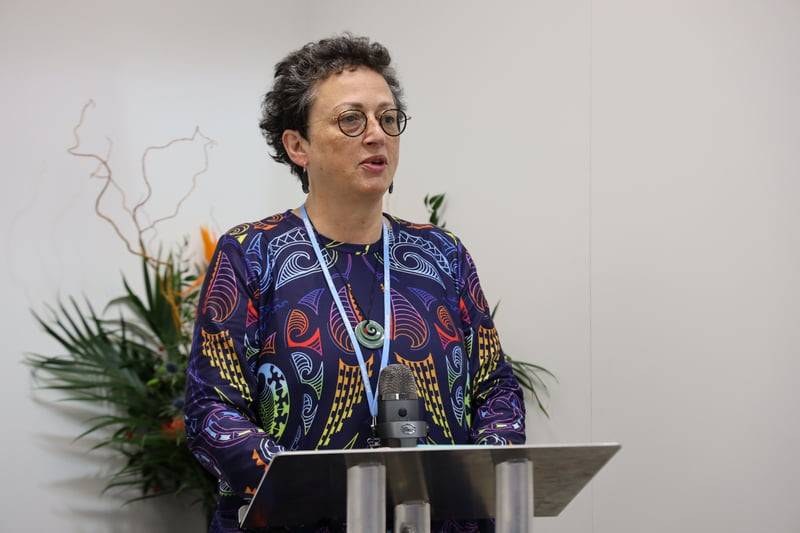 Planting endless radiata pine as a way addressing carbon committments is not the way to a truly net zero future, according to experts at the first session of the Climate Change and Business conference held in Auckland yesterday.

The conference, which was last held in 2020, seeks to investigate the role of business in decarbonising the country, especially in light of the country’s two blockbuster climate plans taking shape this year – the Emissions Reduction Plan (ERP) and National Adaptation Plan (NAP).

A record turnout for the conference, some 500 people plus those virtually attending, indicated heightened interest in proceedings off the back of both the plans as well as almost constant news of climate disaster around the world. Floods in Pakistan and New Zealand, drought in China and wildfire across the EU and the west coast of the US are but a fraction of increasingly erratic and extreme weather the business and governments are having to adjust to.

MFAT’s climate change ambassador Kay Harrison addressed the conference after a brief pre-recorded opening speech by Prime Minister Jacinda Ardern from London, where she is attending the funeral of Queen Elizabeth II.

Harrison, who was appointed to the newly created role in 2019 and had been working as lead negotiator, International Carbon Markets at the Ministry for the Environment prior to that, said countries are too focused on their own plans to get to net zero.

“We have started to equate ambition with the pace and trajectory of our domestic transitions, not the global requirement to address the problem,” she said.

The problem with confining ambition to each country’s capacity to transition is that such an approach would not deliver the volume of emissions reductions the world had to see “by 2030, let along 2050.”

“Picture if you will a heat map, or a disaster map of the world, and the fires that are raging around the world are pockets, hotspots of emissions – we should be looking at that map and sending our firefighters to those hot spots,” she said.

“But generally we are not responding that way.”

Harrison described one example of the kind of response she thought characterized progress: in 2021, the governments of South Africa, France, Germany, the UK and the US, along with the EU, provided US$8.5 billion in a first stage of financing to move South Africa away from coal by doing things like decommissioning and repurposing coal-fired power stations, investing in renewables, pursuing green industrialisation such as manufacturing using green technology and a shift to the production of electric vehicles.

“South Africa has one major electricity provider who uses coal fired power stations – the emissions from that company are equivalent to the emissions of France, so getting alongside a company like that and turning coal-fired power generation into clean energy is a win for us all,” Harrison said.

Climate finance and small financial incentives were a drop in the ocean compared with what the world needed, Harrison said, which was serious money to the reductions that can be delivered all around the world. To do this, we’d have to put prejudices and assumptions aside – the first one being “as long as we have a domestic transition plan and we stick to it, then we should supplement our ambition, funding reductions abroad – and that is right and proper.”

“No country should ever resist selling the possibility of reducing emissions to another country [to] keep some emissions back so they will achieve their next NDC [Nationally Determined Contribution] – sadly some countries do that, they say ‘we could sell you some emissions reductions but we might want to save them for our 2030 NDC’ – I hope you understand how lunatic that is, but in an NDC-biased world, that is what some countries actually say.”

Thirdly, she said, no developed country should consider the delivery of its own transition sufficient ambition or effort in the global fight against climate change – “and here I’m talking about the redirection of finance flows towards countries whose emissions can and must be reduced – public and private finance.”

Harrison said as things get worse – “and they will” – countries would feel torn about how to respond, with many different and conflicting calls for funding mitigation and adaptation.

“The fact is it is going to need to be all of these things – we will need to develop a much more global sense of responsibility to put out the fires, to transition all of our lives and to support a resilient future for all; it starts with the recognition that we must act globally and locally.”

Keep it in the ground

Associate Professor Malte Meinshausen of University of Melbourne, one of the lead authors of the IPCC Sixth Assessment Report, also addressed the conference.

He said without any effort to mitigate climate change at all the earth could make it all the way up to 5 degrees warmer by the end of the century.

But to try and remain around the 1.5 degree point, as was the current plan, would require immediate action this decade “otherwise we will shoot past it – we can slightly overshoot and come back but that puts the pressure on future generations to have negative emissions.”

He commented on New Zealand’s NDC which is aiming for a roughly 50% reduction in 2005’s gross emissions by 2030 and net zero by 2050. But because methane emissions have not been reigned in dramatically, it would put pressure on other parts of the economy to keep emissions down in order to meet the overarching target.

Meinshausen was asked by moderator Katherine Ryan whether New Zealand could “plant its way” out of the problem – i.e. can the country plant enough trees to offset the possibility of emissions rises (or less-than-expected falls)?

The scientist said no.

“What we really need to do is stop pulling carbon out of the ground from fossil fuels into the atmosphere – we know that carbon stored on land is rather vulnerable, and in other countries you already seen increased wildfires – it’s not a long-term solution to plant trees to get ourselves out of the problem,” he said.

Dr Christina Hood, a climate change and energy policy consultant for Compass Climate and former head of International Energy Agency Climate Change Unit, said nature was getting ahead of the world’s ability to respond to climate change.

“If we’re worried about tipping points we should not be thinking about the cost benefit analysis of acting or not acting, we should be taking more of a risk management approach to say, Okay, how close to this boundary are we are we willing to get? So it’s an entirely different type of a problem.”

Hood reflected on work done by her former employer, the IEA, a conservative organisation with a history of alignment with fossil fuel companies that had worked up a scenario of what it would take to be consistent with 1.5 degrees.

“What it looks like is emissions from fossil fuels actually going to zero by 2050 – the net here only counts the permanent removal and storage underground of CO2 – if you’re still putting CO2 into the air, you have to take it out again and store it under the ground.

“This is not offsetting with forestry to be consistent with 1.5,” she said.

Hood said policy thinking had been consumed with reducing emissions – reductions, carbon budgets and the ETS for example, where the goal is to squeeze emissions out of the economy until there is none left.

“But then that creates a space for everything else that’s going to be built up to replace those things that have been pushed out – and raises the question of what do we actually want? And how much steering does that need from government and how much is ‘the nimble market will come in and build the alternatives, and you don’t have to worry’?