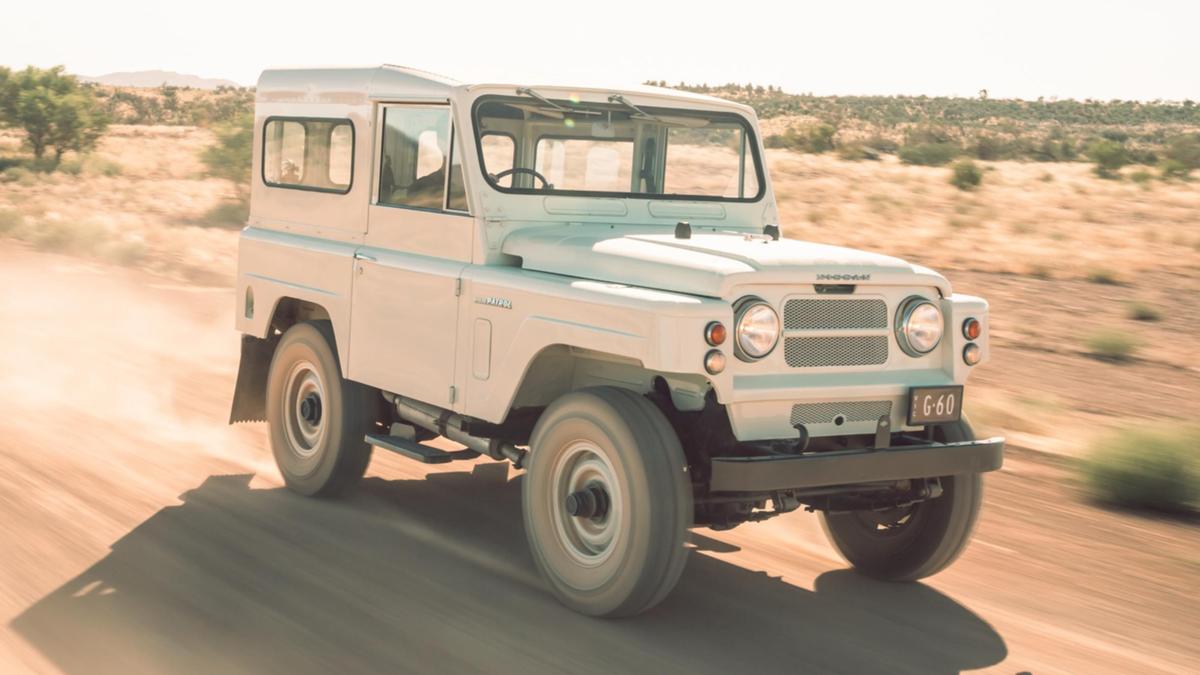 Nissan is celebrating the 60th anniversary of the first motorised crossing of the Simpson Desert, achieved by the Sprigg family in their G60 Datsun Patrol during 1962.

The Simpson Desert is the largest parallel sand dune desert in the world, spanning more than 170,000 square kilometres and touching the Northern Territory, Queensland, and South Australia.

With no real tracks or maps to follow, the Sprigg family set off from Andado Station in the Northern Territory and spent the next two weeks travelling across more than 1100 sand dunes.

The desert crossing eventually ended on September 11, 1962, when the family reached Birdsville in Queensland.

The family averaged 5km/h on their journey. Along with the sand, the family had to navigate the saltbush crops that posed a fire danger if they got bogged at any point.

This fire risk was amplified by the fact the Sprigg family carried a 200L drum of petrol with them.

“In 1962 my dad took my sister, Mum and I across the Simpson Desert, and that would become the first motorised crossing of the desert,” said Doug Sprigg, who was seven when his family completed the crossing.

“I have such fond memories of that G60. It was such a robust and reliable vehicle. I was even shorter then than I am now, and Nissan had even provided me a way of seeing forward – through the air vents below the windscreen.”

Doug is now the second-generation owner of the Arkaroola Wilderness Sanctuary, which is situated in South Australia’s red-dirt outback, an eight hour drive from Adelaide.

His father, Australian geologist Reg Sprigg, bought the 144,000-acre property in 1968 after falling in love with the land.

Nissan caught up with Doug at Arkaroola with a “perfectly restored” G60 Patrol to celebrate the 60th anniversary of the Simpson Desert crossing.

“Dad was amazing in his diversity of knowledge, and I didn’t realise just how much I relied on him until he died. And suddenly, this amazing resource was gone.”

“But jumping in this Nissan brings those memories back, it’s been amazing.”

The second-generation G60 Patrol arrived in Australia in 1961 as the Datsun Patrol with a (then) modern overhead valve 4.0-litre inline six-cylinder petrol engine producing 92kW of power, and was offered in soft-top, wagon or cab-chassis body styles.

Australia was among the first international markets to see the Patrol when the G60 lobbed, as the first-generation model was only sold in Japan.

This G60 iteration went largely unchanged for almost 20 years until was replaced by MQ Series Datsun Patrol in 1980.

Australia has long been a key country for Patrol sales, and for a small period of time during the model cycle of the GU was actually the world’s biggest market for the car.

The Patrol has also been in service on police, fire, and emergency service fleets locally.

More recently, the Patrol set its all-time Australian sales record in March 2022, with 918 finding their way into customer hands.

Some of the Patrol’s recent growth has been assisted by supply headaches on the Toyota LandCruiser 300 Series, which is its biggest rival locally.

The Y62-generation Nissan Patrol has been on sale on 2014 and is targeted at the Middle East with its petrol engine.

It currently starts at $82,160 before on-road costs and extends to $95,115 before on-roads, with all variants powered by a 5.6-litre naturally-aspirated V8 engine producing 298kW of power and 560Nm of torque.