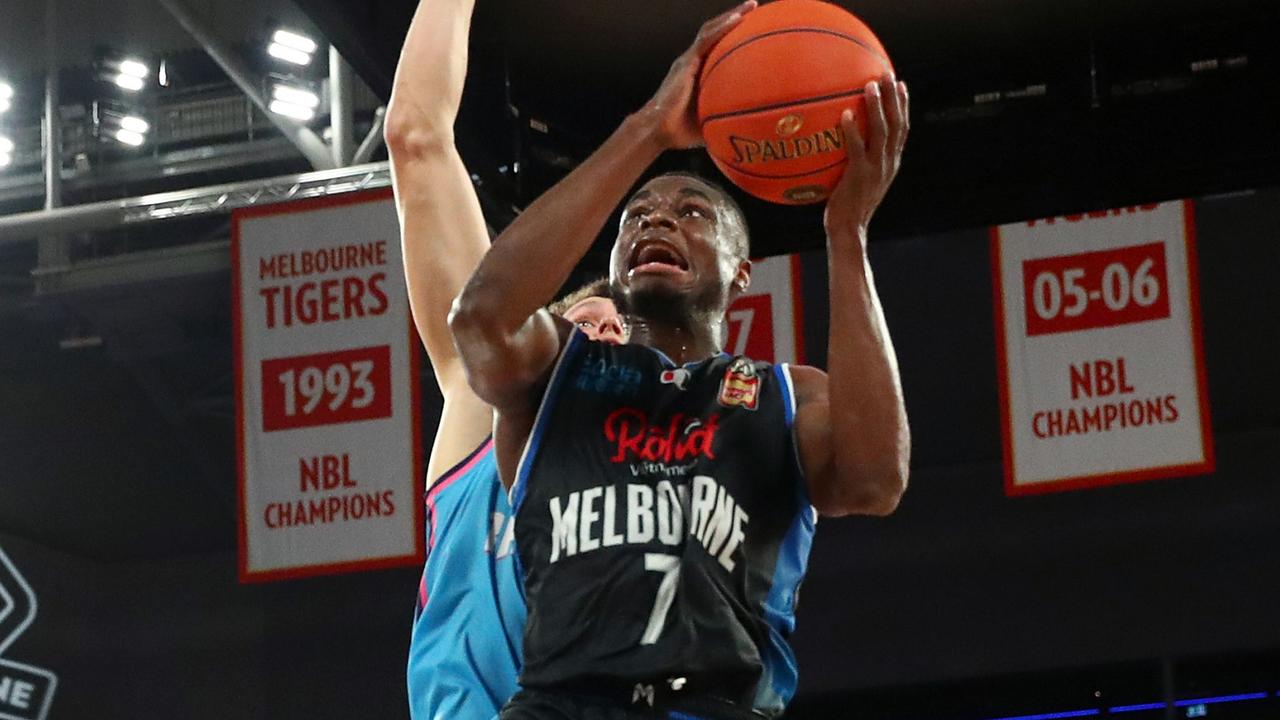 Caleb Agada admits his own high expectations can be a burden, but a pep talk from a United star went a long way towards a big performance.

The intense Melbourne United character holds himself to perhaps an unattainable standard and has revealed he was pulled aside over the weekend by star teammate Jo Lual-Acuil and told not to overanalyse things.

Watch Every Game of the 21/22 NBL Season Live & On-Demand with ESPN on Kayo. New to Kayo? Start Your Free Trial >

“I have a lot of expectations for myself. I feel like sometimes that could be an issue,” Agada said on Sunday after he led United to a 35-point demolition of New Zealand.

“Jo brought me to the side (at training) and was telling me ‘listen, play loose, have fun, that’s where you’re at your best, don’t overthink things’.”

The 27-year-old took his teammate’s advice, letting it all hang out and looking free as a bird on his way to a team-high 17 points to go with nine rebounds and five assists in a Sunday swing from United that had to be seen to be believed.

In previous years, the uniquely-talented Agada has always been the focal point of his teams. But, at the reigning champions, he has encountered a learning curve to fit in with a side that is stacked with elite talent.

“It’s understanding that I’m playing on a championship-level team with a bunch of great players so there are going to be times where I need to do more than what I’m used to doing,” Agada said.

“It’s not just about me, like it was in previous situations I have played in, it’s more about the team and doing what I can do to make the team succeed.

“My teammates, the coaching staff, everybody’s done a great job of supporting me and helping me understand the best way of doing that.

“As long as we’re winning, then that’s all that matters to me, to be honest.”

That is undeniable — United is on top of the ladder and have bounced back from a mini slump with three straight wins.

And Agada is doing a little bit of everything — he’s in the top five on the team in all the major statistical categories and he is No.1 in the NBL among qualifying players in plus-minus. United are outscoring opponents by 9.9 points when Agada is on the court. Perth star Bryce Cotton is No.2 at +8.5 and teammate Chris Goulding is third at +8.1.

Coach Dean Vickerman has helped the Nigerian international, who grew up in Canada, through the ups and downs of his debut season in the NBL.

“I think he’s finding a better balance about really attacking the paint and making the step-back three, which is a signature move for him. He’s one of the best defenders on this team.

“We show a lot of trust in him and we know he’s still growing as a player and we have good conversations about how he can continue to help us.”

Agada will look to build on his Breakers performance Sunday when United jet to Cairns to face the Taipans.

After three games in eight days, Vickerman said his team will take some well-earned time off before refocusing on a team that is struggling at the bottom of the ladder, but has the ability to hurt opponents when switched on.

“Cairns have shown inconsistent form within games, but what they did up in Cairns the second half against New Zealand, they can be scary good,” Vickerman said.

“When they’re scoring the basketball and pressing and using their length to trap and speed the game up, it’s another different challenge.

“We’ve been playing well on the road but, any time you go to Cairns, it’s always going to be tough.”

Originally published as NBL22: How Melbourne United import Caleb Agada is adjusting to life in the NBL