The Queen’s coffin is due to arrive in London soon, and the city’s authorities are planning their way through a logistical nightmare – how to facilitate the hundreds of thousands of mourners wishing to pay their respects.

Estimates of how many people will go to see the late monarch as she lies in state this week vary from 750,000 to one million.

Anticipating long queues, mourners have already started camping out days ahead of the Queen’s coffin arriving.

“I really, really want to be part of it,” Vanessa Nathakumaran said after becoming the first person to take a place just south of Lambeth Bridge, where it is expected the official entrance to the queue will be set up.

Elizabeth II’s coffin will be taken from Edinburgh to Buckingham Palace in the early hours of Wednesday morning (Australian time), before a ceremonial procession escorts it to Westminster Hall at around 11pm (AEST).

The Queen will then lie in state from 2am (AEST) on Thursday until 3:30pm next Monday, giving members of the public four and a half days to visit the coffin and pay their respects.﻿

The British press is throwing around different estimates about queuing times.

The Sun reports it could be up to 12 hours, but another publication quoted an MP saying it could be more than double that.

“Queues could be up to 30 hours as we are obviously expecting and planning for unprecedented demand,” The Times reported Culture secretary Michelle Donelan as saying to fellow MPs in a WhatsApp message.﻿

Mourners will have to go through airport-style security screening, which will enforce a strict policy on bags and other items people are allowed to bring with them.

Officials have told people to not bring any camping equipment or chairs, saying the line will remain constantly moving.

“Please note that the queue is expected to be very long,” the UK Government website states.

“You will need to stand for many hours, possibly overnight, with very little opportunity to sit down, as the queue will keep moving.” 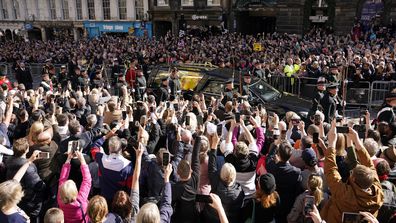 The line is expected to stretch from Parliament along the bank of the River Thames, and officials have advised commuters in the city to change their working patterns because London is expected to be extremely busy in the coming days.

There are also concerns that not everyone wanting to pay their respects as the Queen lies in state will get their wish.

If the estimate of 750,000 mourners is accurate, that would make for one person seeing the ﻿coffin every half a second over the course of the four and a half days.

The government has warned ﻿that the line to Westminster Hall may shut early as a result.

“The queue may close early to ensure as many visitors as possible can enter the palace before the lying-in-state period comes to an end,” it states on its website.

There have already been massive crowds lining up to pay respects to the Queen as she lies in state in Edinburgh, where the coffin is on display at St Giles’ Cathedral – but in this case only for 24 hours.﻿

Rosamund Allen, 67, came to Edinburgh from Rothbury in northern England to be part of history.

“I felt very sorry for the family itself to be on show. They are very brave to do that. And I really hope and pray that they get something out of today and have a chance to mourn themselves.

“They were very kind to allow us to be part of their sadness.”