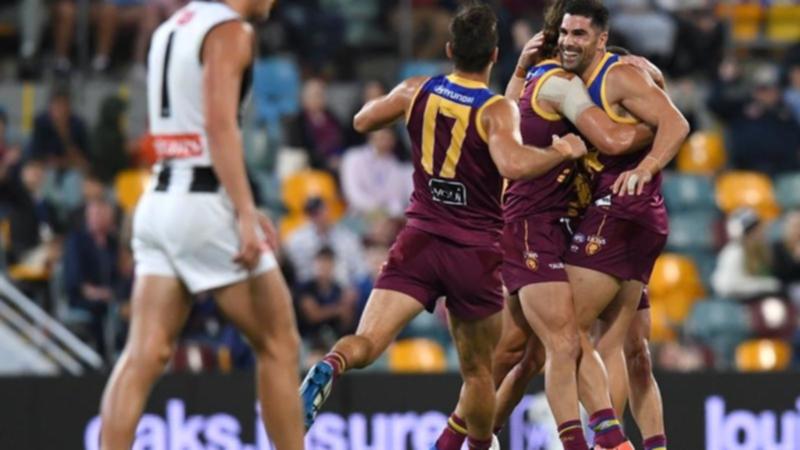 Collingwood started fast and threatened late but Brisbane ensured their dominance at a sold-out Gabba continued in a seven-point AFL win.

The Lions won 15.8 (98) to 14.7 (91) on Thursday, overcoming a 13-point quarter-time deficit, building a 25-point lead and then facing some nervous moments as the Magpies refused to go away.

Lachie Neale had 33 touches and a goal in his 200th game while Joe Daniher continued his fine form with four goals built on confident pack marking and set-shot kicking.

Victory improved the Lions’ Gabba regular season record to 29-1 since the Magpies thumped them by 62 points in the corresponding fixture three years ago.

Scott Pendlebury tagged Neale in the first quarter and, despite the Lions’ midfielder kicking a goal, took the points as the Magpies booted five goals.

Neale quickly shrugged him though, collecting 14 of his disposals in a match-turning second quarter.

It helped Brisbane to the first six goals of the term and a 13-point halftime lead that accurate kicking meant they never relinquished.

Jack Crisp had 36 disposals and 11 clearances for Collingwood, while Pendlebury and Nick Daicos had 27, Jeremy Howe 14 in his 200th game and Jordan de Goey kicked four goals.

Daniher kept popping up when Brisbane needed something and Marcus Adams was similarly solid in defence, even snagging his first goal since 2017 when he muscled one outside the arc as the Lions again threatened to sprint away.

Nathan Kreuger’s second goal pegged the lead back to 18 at the final break though, before Darcy Gardiner was pinged for holding the ball and de Goey made it an 11-point game.

Mason Cox then earned another free kick for the visitors but missed his set shot, Daniher and Daniel McStay not making the same mistake at the other end.

De Goey bent his third goal of the fourth quarter through to again give Magpies fans hope in the final three minutes, Callum Ah Chee’s terrific tackle on a free-wheeling Crisp sealing victory.

Gardiner faces some time on the sidelines for his late hit on Josh Daicos.

Brisbane debutant Kai Lohmann, handed his guernsey by Leigh Matthews before the bounce, was lively on debut.

The 18-year-old hit Bailey on the chest with an outside-of-the-boot special among nine adventurous disposals.