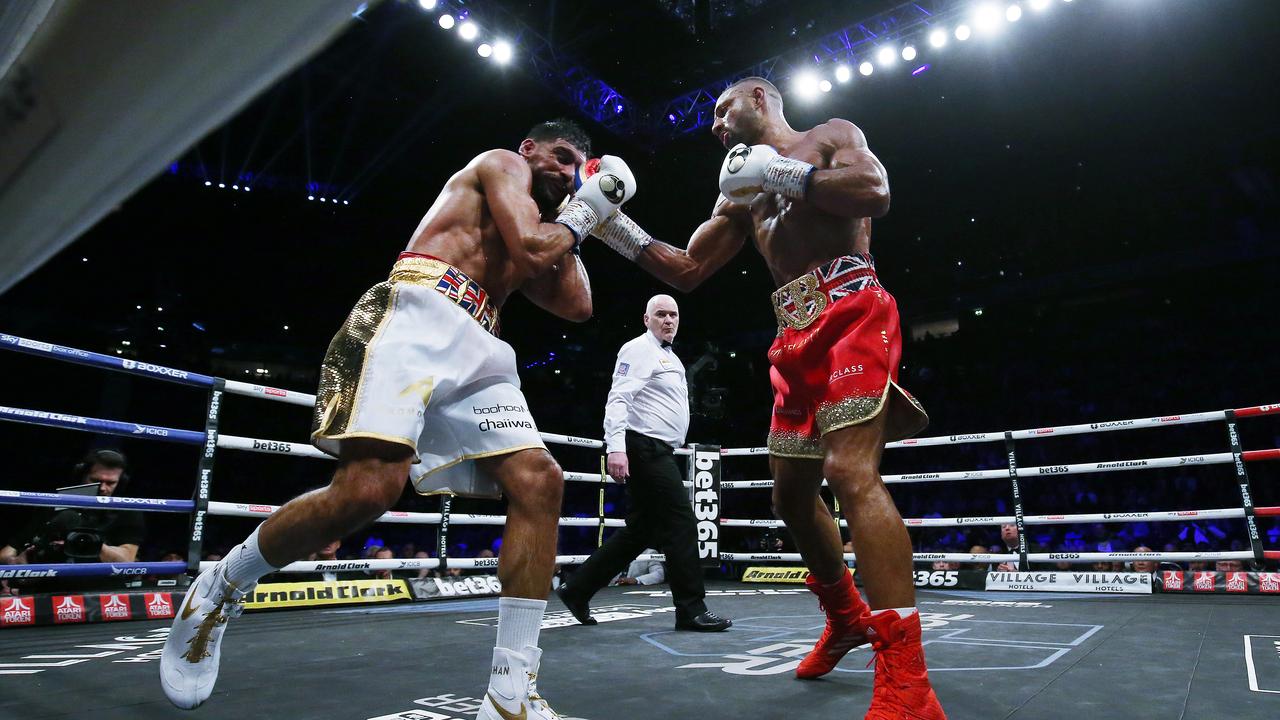 One of boxing’s ugliest feuds has been decided in a brutal knockout win and one star being mercifully sent into retirement.

One of boxing’s ugliest feuds is over after Kell Brook destroyed Amir Khan in their showdown on Sunday (AEDT).

Almost 20 years after they first traded punches the, veteran warriors put on a show at the Manchester Arena — but it was painful viewing for the boxing world.

Former light-welterweight world champion Khan was beaten into a pulp with the judges scorecards ruling all five rounds went to Brook before the referee stepped in to stop the fight in the sixth round.

The TKO victory came with more than two minutes left in the sixth round.

There was no denying it was the correct decision from Referee Victor Loughlin after Khan had been seen on wobbly legs throughout the fight.

After struggling to throw a punch in the sixth round, Khan was finally saved from himself by the referee stoppage.

There was an avalanche of boxing commentators calling for both fighters to retire at the age of 35. Khan admitted after the fight he will sit down with his family before deciding if he will hang up his gloves.

Khan has won immense respect from the boxing world for coming out in the fifth and sixth rounds and fighting on despite taking a barrage of clean shots, The Sun reports.

Brook almost took his head off again at the end of the fifth after landing yet another big right hand.Khan was once again on wobbly legs in fifth but somehow managed to survive Brook’s constant onslaught.

The stern resistance from Khan eventually broke in the sixth as he was rocked once again by yet another big shot.

Brook swarmed Khan like a shark hunting its prey and once again unleashed hellfire of his shelled-up foe.

That’s when Loughlin mercifully called a halt to the contest to prevent Khan from taking any more necessary punishment.

Boxing guru Dan Rafael posted on Twitter Khan had “the s*** beaten out of him”.

“It’s mercifully over. Brook TKO6 Khan. Beat the s*** out of him pretty much. Khan all heart, but no chin or punch resistance. Had him on the ropes, mashing him up and ref stops it. Good stoppage.”

He said he hopes both fighters retire.

The pair had traded bitter sledges in the heated lead up to the fight.

However, their long-running feud appeared to be settled in the ring after the fight with the pair embracing.

Their grudge dates back to the before Khan became a household name by winning silver at the 2004 Athens Olympics.

Then Khan capitalised on his fame to take his mega-money PPV roadshow to America while Brook took the hard route to his IBF world title.

Even when matchmaker supreme Eddie Hearn had them both signed up to his Matchroom brand, Khan cut a three-fight deal early to leave Brook hanging and face Terence Crawford instead.

Brook will always insist Khan ducked him until the very end, Khan will forever believe he was a league above before they even got started.

Now the score is settled for good.