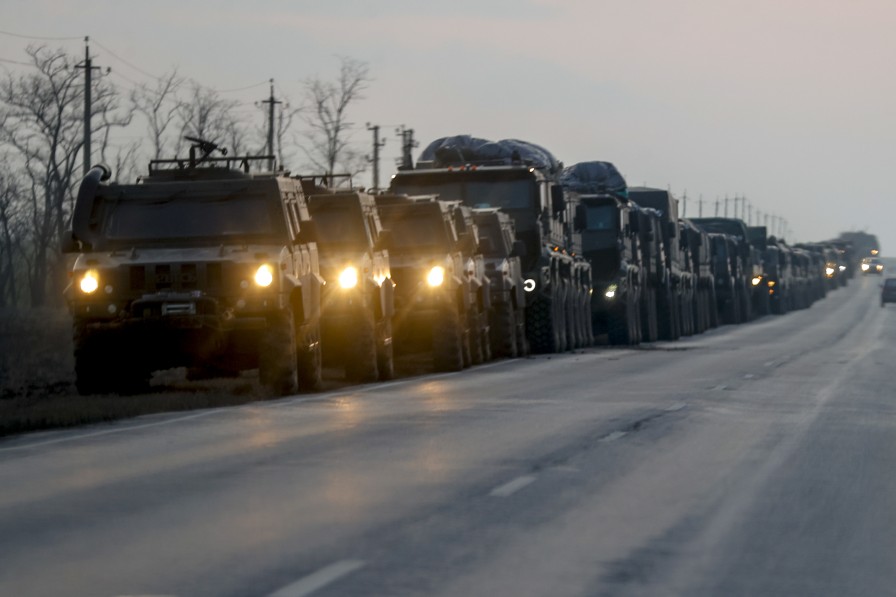 In a recent conversation with a geo-political expert, I was rebuffed when it was suggested the Russian invasion of Ukraine was an act of civil war. The observation was based on historical justifications used by President Vladimir Putin that Russia’s western neighbours, Belarus and Ukraine, had similar cultures and origins.

They were created as Soviet Socialist Republics in 1922 by the Bolsheviks, who overthrew a weak parliamentary government that succeeded tsarist rule in 1917. A year later, Soviet Russia made a peace settlement with Germany and withdrew from World War I.

Ukrainian nationalists had signed a separate deal with the Germans, granting nominal independence ahead of the Brest-Litovsk Treaty that forced Russia to give up its imperial territories in Poland, Finland, Estonia, and Lithuania.

German troops occupied Ukraine, resulting in Lenin’s Soviet Republic losing a third of its population (55 million), a third of its agricultural land, more than half of its industrial capacity, and nearly 90% of its coalmines.

The Bolsheviks moved the capital to Moscow from St Petersburg (called Petrograd after the revolution until renamed as Leningrad), while Trotsky rallied his Red Army into a force that reached five million in 1921.

The Reds won the civil war against the Whites through techniques familiar from Russian history: overwhelming numbers, terror through mass arrests and shootings, and centralised government control over every aspect of the economy and social life.

By 1922, Stalin was building his power base in the Communist Party and invoking emotions that ran deep in the Russian psyche. This included the embalming of Lenin’s body as an object of worship in keeping with Orthodox Christian teaching, “where the divine was not confined to the heavens but immanent in worldly existence”.

This quote from British historian Orlando Figes is central to themes he explores in The Story of Russia, the latest of his 10 books on Russian and European history. His others have focused on specific periods or topics, such as culture in Natasha’s Dance (2002).

His aim is to explain the invasion of Ukraine through the lens of Russia’s origin myths but, importantly, not to justify it. Many will read this book for his judgments on Putin’s regime and Ukraine’s future.

But its worth lies in what went before, as successive leaders – from the Orthodox Christian tsars of the Middle Ages through to the post-communist era – exploited the ‘Russian values’ of patriotism, collectivism, and submission to the state.

It is a story devoid of the West’s evolution to democratic societies with their panoply of independent civic organisations, rule of law, separation of church and state, voluntary societies, and established freedoms.

It is also the story of a people whose military encounters were marked by a “ruthless disregard for human life” – such as the loss of 12 million soldiers in World War II, three times that of German losses – and horrific sacrifices by its civilian population in the name of the motherland.

“Putin envisaged Russia as a supranational ‘civilisation’, defined by its spiritual values, opposed fundamentally to the secular and liberal influences in the West,” Figes writes. He doesn’t let up in placing this autocratic streak within a tradition of rewriting history.

“No country has been so divided over its own beginnings. None has changed its story so often.”

It started with the foundation of Kievan Rus, a loose dynastic federation of principalities that spread from the Baltic to the Black Seas. They were mix of entrepreneurial Vikings and collectively minded Slavs, who were culturally linked to Byzantium after the conversion of Prince Vladimir to Orthodox Christianity in 988.

Two conquests had a major impact in the following centuries: from the east, Mongols occupied a large part of Kievan Rus from 1240 to 1500, while the Ottoman Muslims captured Constantinople in 1453, ending the Christian Byzantine Empire.

In 1547, the first tsar, Ivan, reinvented Byzantine traditions but cemented his power using Mongol autocratic rule. He and his successors, including Ivan IV (‘the Terrible’), doubled the size of Russia, mainly into Asia, during the 17th century.

A re-orientation to the West began under Peter the Great’s reign, from 1698 to 1725, as he realised Russia badly needed modernisation to overcome its inferiority. This was followed by further territorial expansion to the west and south under four female tsars (including Catherine the Great) in the 18th century.

Moscow, as the third capital of a Holy Christian Empire with Jerusalem and Rome, was a tenet of tsarist rule that united the church with a ‘commune’ state. But Russia’s expansion was seen as a threat in the West, with British and French troops seizing control of Crimea in 1854.

The defeat “brutally exposed the country’s many weaknesses: the corruption and incompetence of the command; the technological backwardness of the army and navy; the poor roads and lack of railways”; and much else, Figes writes.

He adds that this humiliation left a deep and lasting resentment that continues to this day. “All Putin’s talk of Western ‘double standards’ and ‘hypocrisy’ … and ‘disrespect’ for Russia, goes back to this history.”

Tsar Alexander II responded with the Great Reforms of the second half of the 19th century, including the emancipation of the serfs but, without resolution of the land issues, these moves failed to stem the tide of revolution leading to 1917.

Figes races through the Soviet era, noting the observation of historian Michael Cherniavsky that Russians held to their belief in Stalin as the divine-like tsar even as he murdered thousands of citizens in the purges of the 1930s. At their peak, the daily toll reached 1500.

“The harder life becomes, the more the Russians seek hope and salvation in myths transcending everyday realities,” Figes writes. In 1937, just four years before Germany invaded the Soviet Union, Stalin had put 767 members of the military high command on trial for treason.

Of these, 544 were executed and 59 were still in jail when Hitler reneged on the 1939 non-aggression pact, leaving Russia to defend itself without many of its most experienced officers.

Meanwhile, Stalin was promoting more historical myths through the cinema with Sergei Eisenstein’s Ivan the Terrible, which showed plotting against the tsar, and Alexander Nevsky, in which the invading Teutonic Knights were repelled in the 13th century. This popular film was briefly banned to appease Hitler after the signing of the Molotov-Ribbentrop agreement, as the Knights were revered by the Nazis.

After 1945, Stalin succeeded in recapturing territories Russia lost back in 1918 and was given a free hand to impose communist rule on Eastern Europe. But this proved a bridge too far when Mikhail Gorbachev attempted to reform the tottering Soviet system from within after his appointment as the youngest Communist Party general secretary in 1985.

The Chernobyl disaster prompted him to seek a nuclear disarmament settlement with the West, but he was less successful in dealing with the Soviet Union’s internal problems. The collapse in oil prices, which had buoyed the economy in the 1970s, exacerbated the state’s inability to provide even basic services such as food.

The end came in 1991, as the three heir nations to Kievan Rus – Belarus, Ukraine, and Russia – agreed to disband the Soviet Union, after Gorbachev lost control of the party and the country. Without any civic organisations to fill the vacuum, “the old elites soon re-emerged at the top of the post-Soviet system,” Figes writes.

It was left to Boris Yeltsin to usher in his successor, Vladimir Putin, who had emerged from the only effective arm of Russia’s bureaucracy, its secret police and chief enforcer of the one-man rule that had persisted over many centuries. The only confident prediction Figes makes is that Russia will emerge from its war against Ukraine as poorer, more unpredictable, and more isolated.

The Story of Russia.

The Story of Russia, by Orlando Figes (Bloomsbury).

Nevil Gibson is a former editor at large for NBR. He has contributed film and book reviews to various publications.

This is supplied content and not paid for by NBR.