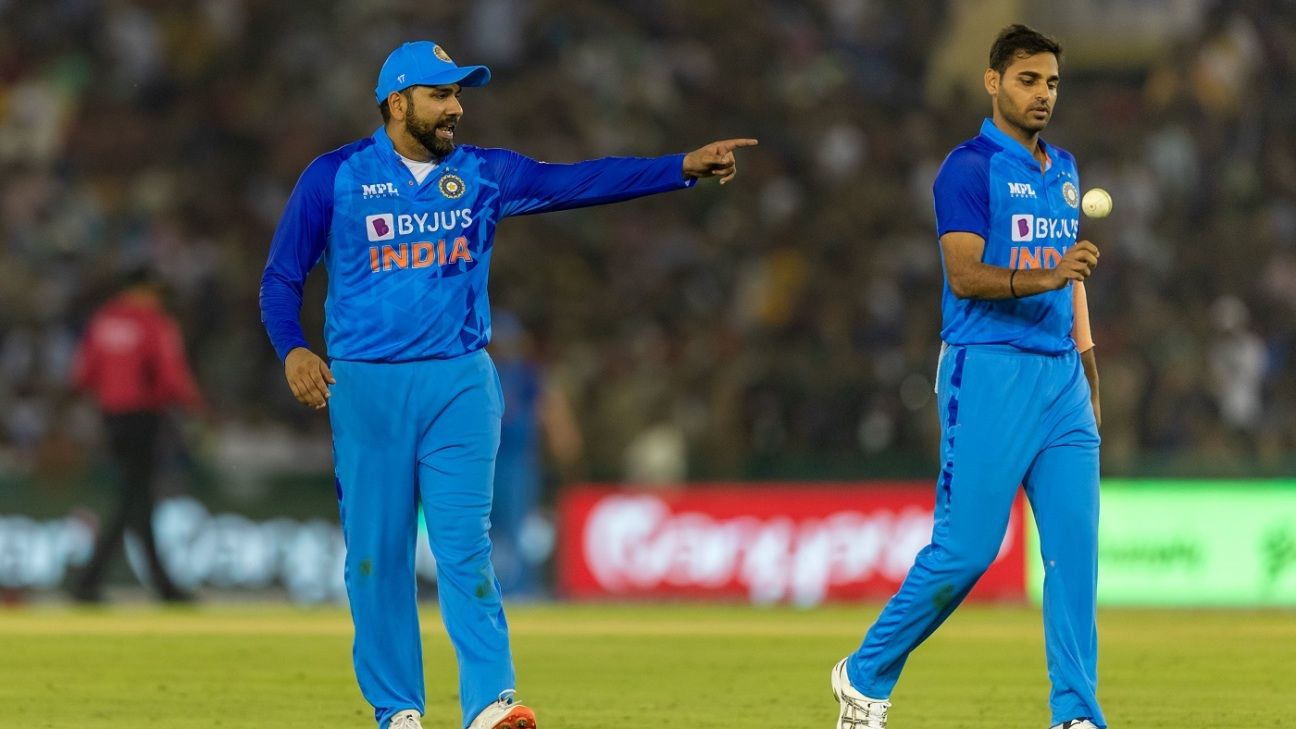 When Rahul Dravid and Rohit Sharma took over the T20I team, India’s main issue was their conservative batting. It has taken time to convince the batters, and it has perhaps taken the batters a leap of faith and a lot of hard work, but they have responded. If India are to look at the positives from the last few matches, there is the improved batting approach and execution.

However, a bit like with bad plumbing, just as they are getting close to plugging one leak, another one is threatening to appear. India have lost their last three matches batting first defending 54, 42 and 41 runs in the last four overs. The irony is that in each of these matches they have batted exceptionally to give them totals to defend, especially in Dubai where batting first is a massive disadvantage.

The common thread in these three matches has been the unavailability of Jasprit Bumrah and Bhuvneshwar Kumar conceding 16, 14 and 19 runs in the 19th overs. There is not much wrong with the decision-making really. In Bumrah’s absence, Bhuvneshwar is the best bowler available at death, which is why he has been given the 19th over.

From the start of 2020 to the start of this month, Bhuvneshwar has been the third-best Indian death bowler in all of T20 cricket. Arshdeep Singh and Bumrah, two of three best overall, were not playing this match.

It is always a bit of a surprise that Bhuvneshwar has been this good at the death. In that his bowling naturally doesn’t have the attributes to protect him should he make a mistake. He doesn’t have high pace, left-arm angle or awkward release. It is a lovely clean action where the ball is easy to pick early and he hardly ever bowls 140kph. It is his planning and accuracy in execution that has kept him in the game.

Bhuvnehswar will be the first one to admit his execution – or the planning – was way off in Mohali. To get hit over a fielder’s head is one thing but to be repeatedly hit by Matthew Wade to areas where there were no fielders without improvisation will hurt him. Accordingly he went for more than 50 for the first time in T20Is. This is a trend the team management will hope Bhuvneshwar can reverse during the World Cup.

Making his comeback from injury was Harshal Patel, who went for 49 runs in his four, including 22 in the 18th over when Wade feasted on his slower short balls, which are his main weapon. The conditions in Mohali – a true pitch with good bounce and no grip – are perhaps the closest India can simulate to Australian conditions. Whether his into-the-pitch slower balls will work in these conditions has been a matter of concern. If they don’t, what does Harshal fall back on?

“I don’t think we bowled well,” Rohit said on the official broadcast after the match. “Two hundred is a good score to defend, and we didn’t take our chances in the field. It was a great effort from our batters, but bowlers were quite not there.

“You can’t score 200 everyday, you need to bat well. Hardik [Pandya] batted really well to get us there. We need to look at our bowling before the next game.”

You have to be philosophical in T20s. The margins are fine over such a short game, luck and toss play a bigger part, you can’t always judge yourself on the results when the difference between a win and a loss can be six feet of distance on a shot. This was not a night to be philosophical. You can imagine the team management will not be philosophical with this defeat, especially the ease with which 55 off 24 was chased down with four balls to spare. It was a timely lesson that India don’t have the tools to be able to afford not being on top of their game with the ball especially in true conditions.