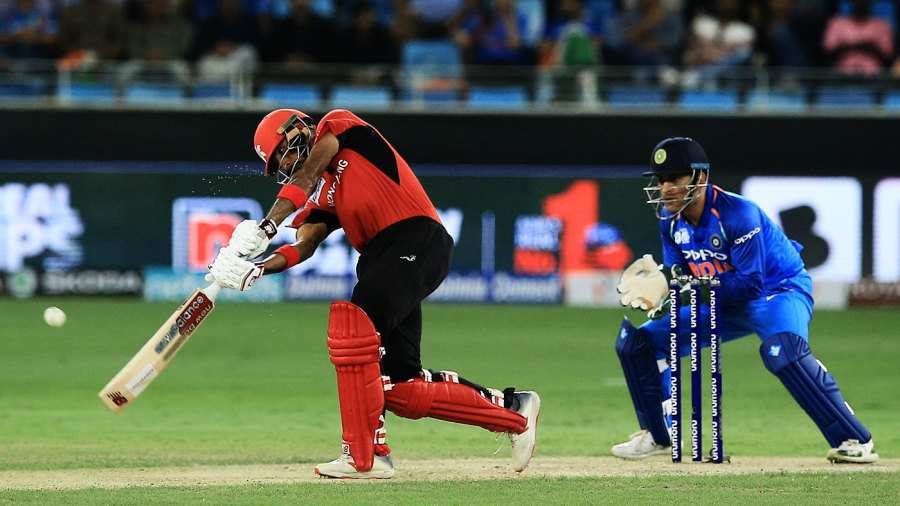 5.30pm Toss time! Nizakat and Rohit are in the middle. Hong Kong win the toss, they will bowl first. “In Oman, we were good chasers, so want to do that,” Nizakat says. “The last time the India game was a good game and we want to do the same. We did some mistakes in the last game, and want to do better today. We have the same team as the game against UAE.”

“We would’ve bowled first as well,” Rohit says. “I believe it will be a good track and we need to bat well to get a good score. (Approach for today’s game) We don’t want to look too much into the opposition. Want to play fair and hard cricket. For us, it’s about coming out and doing everything (importantly our basics) right, which we did against Pakistan. Just one change: Hardik is rested considering how important he is for us. Rishabh Pant is in.”

Ram: “For Hong Kong, it is incredible that they have made it this stage despite all the setbacks they faced in the last three years (retirements, players moving to full member countries, and stringent Covid measures). Hoping they can manage a stunner today or against Pakistan.” — We all love a good underdog story, and I’m sure a few Indians would also not mind if we have a stunning upset today. What’s a tournament without a surprise or two? Here’s hoping for a good game as the two captains walk to the middle for the toss.

Sanket: “From preview I liked that change of Hooda coming in place of Jadeja. However good option jadeja seems, he is not your always 4 over bowler and in batting I would rate Hooda over Jaddu (may be marginally). He can play anywhere and can hit sixes so easily.”

Puneet : “@Sanket @ Mohan- How about Pant playing in place of KL and opening?”

5.17 pm Under 15 minutes for the toss, so let’s take a tour around the other things developing in the Asia Cup. Hardik Pandya has moved into the top five among T20I allrounders after his show v Pakistan, and Shaheen Shah Afridi has left the Pakistan unit to move to London to complete his injury rehabilitation process. But Mohammad Hafeez has been quite critical of the PCB’s management of Shaheen’s injury rehab, going as far as calling it ‘criminal’ and ‘unfortunate’.

Mohan Menon: “I strongly feel we should keep both Pant and Dinesh Kartik in today’s match. We should play with 5 bowlers.”

Sanket: “The promotion of jadeja in last game was good tactical move by Rohit and management , it forced babar to restrict Nawaz till the end but jadeja batting at 4 means pushing DK at 7, which is too low for someone who plays purely as a batter. If you are playing DK he should bat at 6 else just play pant then” — It wasn’t only a ‘good tactical move’ but also a compulsory tactical move with Nawaz and Shadab Khan having the ability to take the ball away from right handers. Jadeja, in fact, fronted the mic in the pre-match press conference where he entertained the media with his dry wit and some insight into how India’s batting looks to stack up in the tournament.

Yoel: “One more name to look out for in HKG – excellent allrounder Yasim Murtaza”

“So who could be a possible threat to India in Hongkong team?” — Great question, Azweer! Babar Hayat comes into the game following unbeaten scores of 38 and 53 in the Asia Cup qualifiers, Nizakat Khan (who is also our vice-captain pick for fantasy cricket today) has scores of 81, 127*, 48, 50 and 39 among his last ten white-ball outings, and don’t forget the veteran offspinner Ehsan Khan who enters the contest with 17 wickets in his last six T20Is. If each of them pull their weight, India will have to bring their A game for sure.

The news is that today’s game will be played on a fresh deck (more in our written preview), where bounce is expected to be aplenty. While some of you feel India should make a few changes – like bringing in Pant, Deepak Hooda or Ravi Bishnoi into the XI – Wasim Jaffer on our preview show believes they are better off keeping the same XI. Where do you stand in the debate about XIs?

4.58pm So what does the Hong Kong team look like? For starters, they are a team of delivery drivers, businessmen, a student, and fathers who haven’t met their newborn children. And yet, they are much more than that. They enter the Asia Cup on the back of three months of rigorous cricket that has taken all over the world. Here’s their story, penned by Shashank Kishore, who has just made his way into the press box. This is what he tells me: “Kohli is taking some throwdowns at the far end, where there are least number of seats occupied. Next to him is Deepak Hooda doing the same. Head coach Rahul Dravid is right behind Hooda, having a close watch. R Ashwin is having a close hard look at the pitch, and Paras Mhambrey, the bowling coach, joins him in examining a few patches around the length area. Arshdeep Singh is jogging around the ground all by himself, while the rest are in their air-conditioned comfort.”

4.45pm The last time the men in blue faced off against Hong Kong at the Asia Cup (in 2018), India were pushed to the brink of a possible upset before their bowlers bailed them out in the ODI. That would be good enough reason for the favourites to not take their opponents lightly one bit, given the chances of an upset are significantly larger as the number of overs reduce in any cricket contest.

India will be buoyant after their win over Pakistan, but Hong Kong too will be quietly confident of putting up a solid show – considering they comfortably cruised through the qualifier tournament for the Asia Cup to take the lone available spot in the main stages of the tournament. On paper, it seems like a game that is a mere stepping stone into the Super 4 stage for India, however, strange things happen in this beautiful sport of ours. I’m Sreshth Shah (with Hemant Brar joining us soon) – here’s a warm welcome to ESPNcricinfo’s coverage of the Asia Cup from Dubai. Let’s kickstart the action with some big hits from Rishabh Pant in yesterday’s nets session, which begs the first big talking point of today’s match: will RP get a game today?