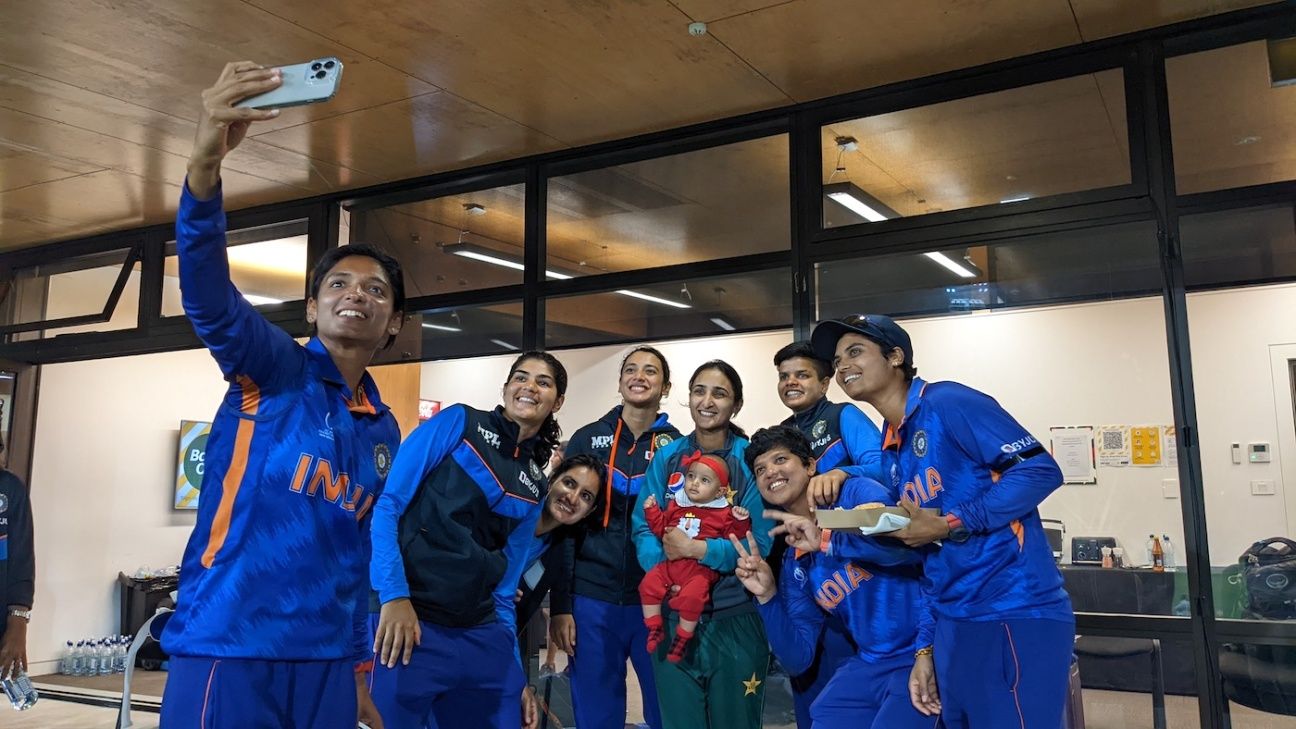 Baby Fatima’s moment of cross-border fame was one of the more memorable images from the Women’s World Cup in New Zealand earlier this year. The infant daughter of Pakistan captain Bismah Maroof surrounded by the Indian players in the post-match afterglow spoke of the love, laughter and respect shared by the two sets of players. It was a defining image of the India-Pakistan rivalry in women’s cricket.

Don’t let people from the outside tell you it’s war; the relationship between the players is cordial. Pakistan allrounder Nida Dar put it succinctly when she said, “match ek side pe rehta hai aur dosti apni jagah pe hai (The contest has its place, our friendship has its place too.)”

It helps that the pressure and the win-at-all-costs mentality – which isn’t entirely absent – isn’t magnified as much by the media as it is when the men’s teams face off.

The latest round of the rivalry will take place on Sunday, when the two teams meet in a crucial Group A fixture of the Commonwealth Games at Edgbaston. India and Pakistan are both coming off losses in their opening matches to Australia and Barbados respectively. That is enough pressure to contend with.

Yet, what the players do know is, irrespective of how their current form may be, they are one performance away from becoming a star.

Ask Nain Abidi, Pakistan’s first centurion in a women’s ODI and a member of the Asian Games gold-medal-winning team at Guangzhou in 2010. She has twice been part of teams that have beaten India at T20 World Cups. Both games were thrillers that had her chewing fingernails.

In Galle in 2012, Pakistan beat India by one run, recording their first-ever win in the tournament’s history. It was also the first time any Pakistan side, men’s or women’s, had beaten India at a World Cup. Then in Delhi in 2016, in front of 7000 screaming fans and pouring rain, Pakistan clung on by a two-run margin via the DLS method.

“No matter how you train your mind to think this is just another game, it’s impossible not to get sucked into the hype,” Abidi tells ESPNcricinfo. “Forget what people think. Your own family members can sometimes put pressure on you. I remember before that Delhi game, so many family members called to wish me luck.

“After we won the match, the PCB announced a reward for us. The departments we used to play for announced bonuses. News channels were knocking on our doors. It was surreal, to the extent that it made us wonder if we’d actually won a World Cup. That is how big a win over India is. It can make you instant stars.”

Abidi is far away from the hype now, having last played for Pakistan, incidentally against India, at the Asia Cup in 2018. Since becoming a parent, Abidi has lived in the USA, but she will unfailingly tune in at 6am on Sunday to watch the rivals play.

VR Vanitha, the former India batter, remembers that Delhi game for its intensity and hype, but also speaks warmly of the atmosphere and camaraderie between the players.

“I remember being very bombastic in my belief that this is just another game and how my mind has been trained to think that way,” she says. “But that day, the moment I reached the stadium and took my earphones off, I was like ‘whoa, what is happening here?’ The hype, the energy, everything was so different. It hit you instantly.”

The loss may have bitter to swallow for India, but two days later, both teams were special invitees for a charity event that ended with a fashion show where the players walked the ramp. The moment word spread that the Pakistan women’s team would be in attendance, they were given front-row seats. It was so different to 2013, where they had to stay within the stadium’s premises in Cuttack for security reasons during the 50-over World Cup.

“The next day at the breakfast table, we sat and ate together,” Vanitha remembers. “You wouldn’t have believed they were the same side we lost to the previous day. We hardly spoke cricket. But as we parted, we wished each other for the rest of the campaign. I can’t remember any instance of there being any animosity. Yes, there was friendly banter, but it was always cordial.”

At Derby during the 2017 World Cup, fast bowler Kainat Imtiaz sat motionless, soaking in every bit of advice she got from her idol Jhulan Goswami. In 2006, Imtiaz was a ball-girl during the Asia Cup in Karachi, where she watched Goswami bowl and became inspired to become a fast bowler.

“I can say I have been able to motivate one girl in this world to play cricket, that too from Pakistan – that was a big thing for me,” Goswami said afterwards.

When Harmanpreet Kaur left the 2019 edition of the Women’s BBL, her replacement Dar, who became the first Pakistan player to feature in the tournament, didn’t waste time seeking valuable suggestions and tips from her Punjabi friend “on the other side of the border”.

Yet for all the friendly interactions off the field, the players are fierce rivals on it. You just needed to see Dar’s reaction upon getting Harmanpreet’s wicket at the World Cup earlier this year to understand it.

This is, in essence, is how the biggest rivalry in cricket plays out between the women’s teams. The players are aware of the geopolitics of the region, which evokes jingoism on either side from time to time, but are determined not to let it bother them. And while India and Pakistan may not play each other in bilateral series, every occasion that pits them against each other only adds a new layer of warmth and camaraderie off the field, even as the on-field intensity simmers.

Sunday will bring another chapter of this fierce yet friendly rivalry. The significance of the contest is unlikely to be lost on either side. A win could be the springboard to pitch for a historic medal, a loss could well mean an early exit from the Commonwealth Games.