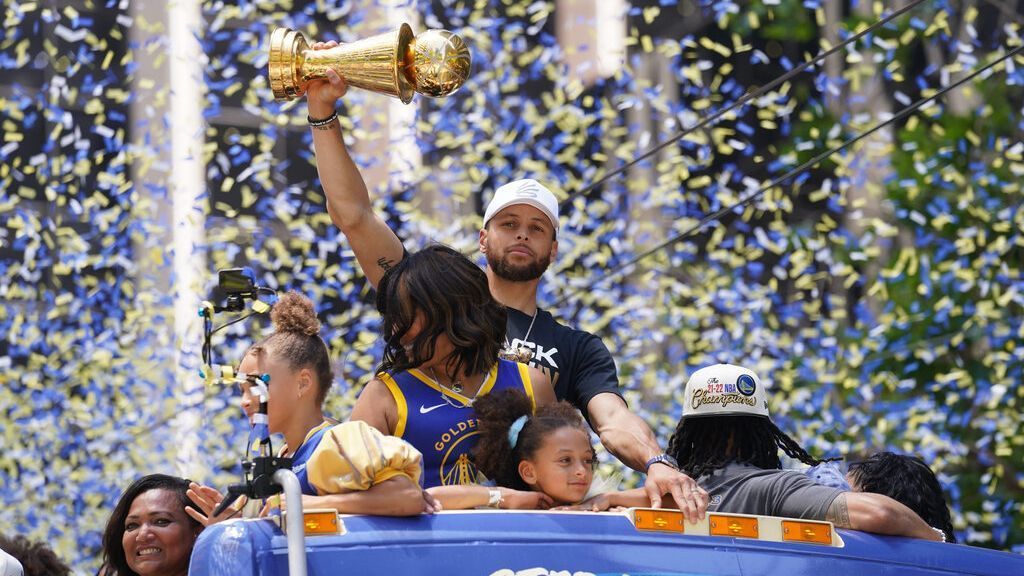 SAN FRANCISCO — It’s been three years since the Bay Area hosted a championship parade, but neither the city, nor the Warriors, forgot how to take in the moment.

Stephen Curry hopped on top of a banister at a Muni train station stop and started hitting the sign that was next to him.

“M-V-P!” chants echoed from every direction, as blue and gold confetti rained down from the sky.

Ayesha Curry pointed at a sign that read “Ayesha can cook,” before popping a bottle of champagne and spraying it down on her husband. That inspired Curry and Damion Lee to clear out a space in the crowd and pop their own bottle, showering the fans that stood in their path.

“We represent you guys,” Curry told the small crowd made up of team and arena employees at the pre-parade rally. “The life that you give us, the inspiration, all those things matter. That’s what it’s all about. Entertaining you guys, giving you something to cheer for, be passionate about. It’s giving us the platform to go do things that haven’t been done before in history and representing the entire Bay Area in the process. We’re back, having a parade in San Francisco, so let’s go do it.”

The Warriors were paired up on double-decker buses, but it didn’t take long for them to ditch their bus and immerse themselves in the thousands of fans that had been waiting for them since before sunrise.

Klay Thompson placed the Larry O’Brien Trophy on the ground, took a step back and did a Michael Jackson-inspired dance behind it. He then scooped up the trophy and took off running, high-fiving and dancing with any fans that ran alongside him.

A few buses behind, Jordan Poole grabbed a Super Soaker water gun and a pool float as he hopped off his bus. He ran up and down the barriers that lined Market St. in downtown San Francisco, drenching anyone he could. He grabbed his friend’s camera and started shooting videos and pictures so he could document himself doing so.

His bus-mate, Andrew Wiggins, grabbed a fan’s bottle of champagne, and after thoroughly shaking it, sprayed it into everyone’s faces.

Up ahead, Gary Payton II walked along the route for 90% of the parade. Before the parade, he said he was going to “go full JR Smith,” during the parade, referring to the Cleveland Cavalier’s parade in 2016 when Smith was shirtless for the entire Cavs celebration.

Payton was a man of his words, ditching his shirt early in the day.

“What brings me the most joy … is seeing the guys who won it the first time,” Draymond Green said. “In your journey, you always want that first-time feeling back. The reality is you never get it again, and the only way to get it again is to feel it through Andrew Wiggins, Jordan Poole, Otto Porter, Beli, Moses, GP … you feel it through those guys and that’s how you get that sensation again.”

Green didn’t appear to have any trouble getting that feeling back, though. After closing his rally speech by saying, “Thank you all, and it’s always f— everybody else,” Green stood in the middle of the street and held up two middle fingers to the crowd. They responded by yelling, “F—, Draymond,” a nod to the chants that Boston Celtics fans yelled at Green, and what the Warriors copied in their locker room celebration after clinching the title.

Green ran around high-fiving fans, even allowing one to dump a bottle of champagne on his head. He took a quick intermission to grab ice cream at Ghirardelli before returning to his bus.

It was evident that after three years away from the top spot in the league, and three years without a parade, the Warriors wanted to revel in the moment as long as possible. As did Golden State’s fans.

People sat in trees, on top of lamp posts and out of windows from San Francisco’s skyscrapers.

Despite barriers along the parade route, people jumped them to get as close as possible to their favorite players. As the buses approached the end of the route, crowd containment seemed like a foreign concept, as fans poured into the streets as the final bus passed.

But no one seemed to mind.

“This has been an amazing year,” Green said. “I told y’all, don’t let us win a f—ing championship, and clearly, nobody could stop it.”