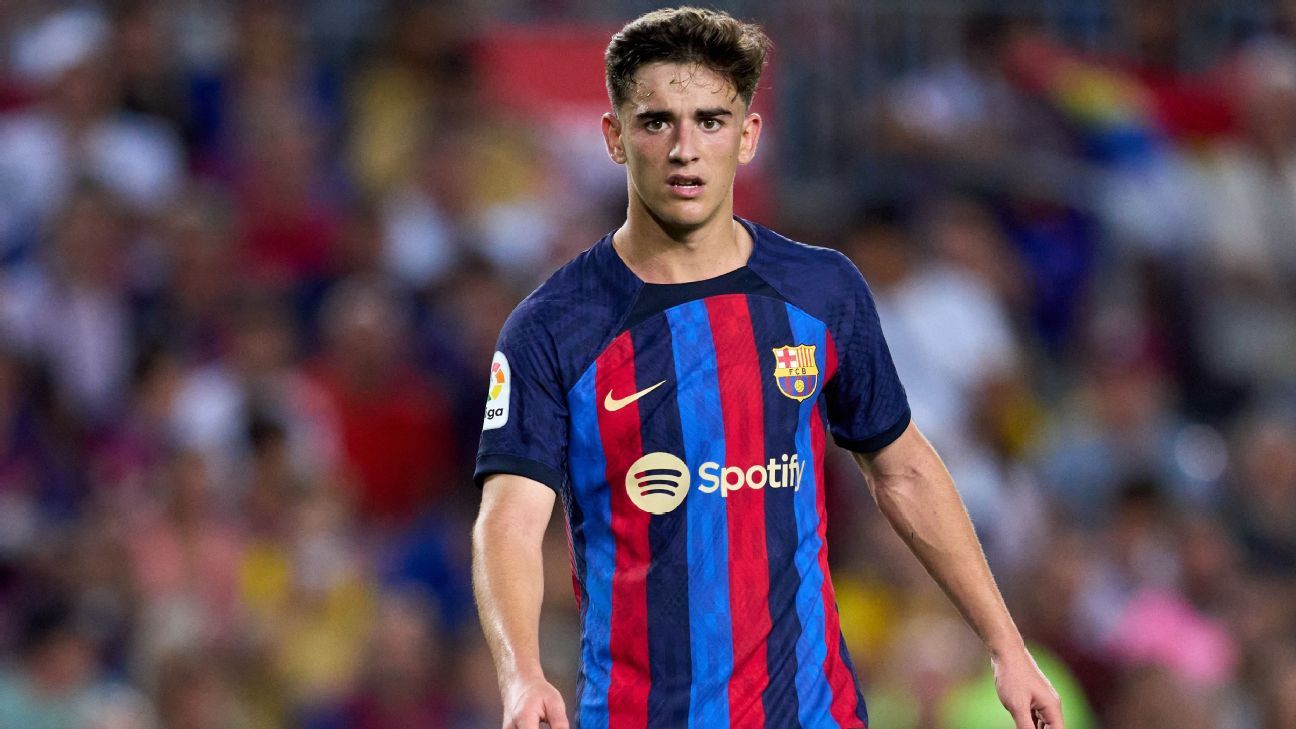 Gavi could sign his Barcelona contract extension as soon as Thursday, according to Diario Sport, and it will include a release clause of €1 billion.

Sources told ESPN in June that Barca had been putting in “a big financial effort” to secure the long-term future of the 18-year-old midfielder, to keep him with the Blaugrana through at least 2026.

Liverpool and Bayern Munich had been linked with the Spain international, whose current deal ends next summer and contains a €50m release clause, but Gavi is keen to stay at Camp Nou.

Barca want everything tied up before Gavi heads off on international duty with Spain. Thursday is the only free day between travelling back from the Champions League match against Bayern and Elche‘s visit to Camp Nou on Saturday.

Gavi would be able to discuss a free transfer to another club outside Spain if Barca haven’t agreed a new contract before Jan. 1.

11.04 BST: The standoff between Barcelona and Atletico Madrid over the future of Antoine Griezmann is likely to be resolved during the next international break, L’Equipe reports.

Atletico have been refusing to start Griezmann this season — with manager Diego Simeone introducing him after an hour has been played in every game so far — as they try to avoid activating a clause in the forward’s two-year loan deal which would see them pay Barca €40m to make the move permanent if he plays over 45 minutes in 50% of their games.

Barca had reportedly threatened to take legal action over the situation but according to L’Equipe the two clubs are now looking at reaching a compromise on a reduced fee of €25m.

10.25 BST: Jordi Cruyff says Barcelona’s summer signings turned down bigger offers to move elsewhere because of the allure of playing for the Catalan club.

Barca signed eight players for the men’s first team this summer, including spending over €150m to sign Robert Lewandowski, Raphinha and Jules Kounde.

Chelsea had a bid accepted from Leeds United for Raphinha and were also linked with Kounde and Lewandowski, who was reported to be a target for Paris Saint-Germain, among others, as well.

“Barcelona has a magnet, it is beautiful,” Barca’s sporting director said at an event on Monday. “You can see the pride in the eyes of the players when they get a chance to sign for Barcelona and that helped a lot, being able to compete with clubs with bigger budgets and better salaries.

“They wanted to sign for Barcelona and we are very grateful for these players because, believe me, they had better offers than us. And still they chose to follow their dream to be part of the history. When you see the eyes shining in these players you know you are in a special place.”

09.53 BST: We could be in for another summer of speculation around the future of Kylian Mbappe as early as next year, after L’Equipe reported that the Paris Saint-Germain forward’s contract runs until 2024, not 2025 as previously thought.

The saga surrounding Mbappe’s potential free transfer to Real Madrid looked to have ended last May when PSG announced — in a surprise U-turn — that the France international had signed a new three-year deal with them.

However, according to L’Equipe, that contract is in fact a two-year agreement with an optional third year which can only be activated with the player’s consent.

That means Mbappe would only have one guaranteed year left in Paris next summer, leaving PSG needing to convince him to commit once again or risk losing him on a free transfer in 2024.

The Spain international returns to Rayo, where he enjoyed a successful loan spell from Real Madrid from 2017-2019, and has signed a five-year contract with the Madrid outfit until June 2027.

Neither club gave any financial details, but local reports claim Rayo will pay Espanyol €8m plus €3m in add-ons for the 27-year-old’s services. However, De Tomas will not be able to be registered until January 2023 as the transfer window is closed, so will be limited to only training with his new teammates for the next three-and-a-half months.

Despite being Espanyol’s top scorer in the last two seasons, including netting 17 times in LaLiga last term, De Tomas has fallen out of favour at Espanyol due to non-sporting reasons.

Negotiations to bring De Tomas back to the club were almost derailed last week when the Rayo president claimed he was headbutted by one of the player’s agents during a meeting. However, those differences appear to have been overcome for now.

08.30 BST: Manchester United are set to trigger contract extensions for five of their players to prevent them leaving as free agents next summer, reports the Manchester Evening News.

Diogo Dalot, David De Gea, Fred, Marcus Rashford and Luke Shaw are all out of contract in June and could discuss a precontract agreement with clubs overseas from Jan. 1.

But the United hierarchy have 12-month extensions in their favour, which will automatically keep the five players at Old Trafford through to 2024 and protect their transfer value.

– Sky Sports reports that Borussia Dortmund midfielder Jude Bellingham is set to move to the Premier League in the summer, with Manchester United, Liverpool and Manchester City all interested. There was plenty of talk around a €100m move for the 19-year-old during the summer, and it appears that is set to continue throughout the next year.

– With Konrad Laimer‘s RB Leipzig contract set to end in the summer, Fabrizio Romano reports that Bayern Munich are among the clubs hoping to sign the midfielder as a free agent. Bayern and Liverpool were seriously interested in the Austria international during the summer, but were unable to reach an agreement with Leipzig to take him to Anfield.

– Milan Skriniar was constantly linked with a move away from Inter Milan throughout the transfer window, but the Serie A giants are now hoping to make sure that the Slovakia centre-back stays beyond next summer, when his contract is due to expire, according to Calciomercato. Paris Saint-Germain were strongly linked with a €70m move and Inter could make Skriniar their second-highest earner in order to persuade him not to leave as a free agent.

– AC Milan have been in constant contact with Pierre Kalulu‘s agents since last May and will soon hold further contract renewal negotiations, reports Calciomercato, even though the French defender’s deal doesn’t end until 2025. Kalulu’s salary could increase from €400,000 a year to €1.2m, although Kalulu wants that number to be around €1.5m. A meeting is already scheduled to take place before the end of September to come to an agreement, with the centre-back wanting to stay put.