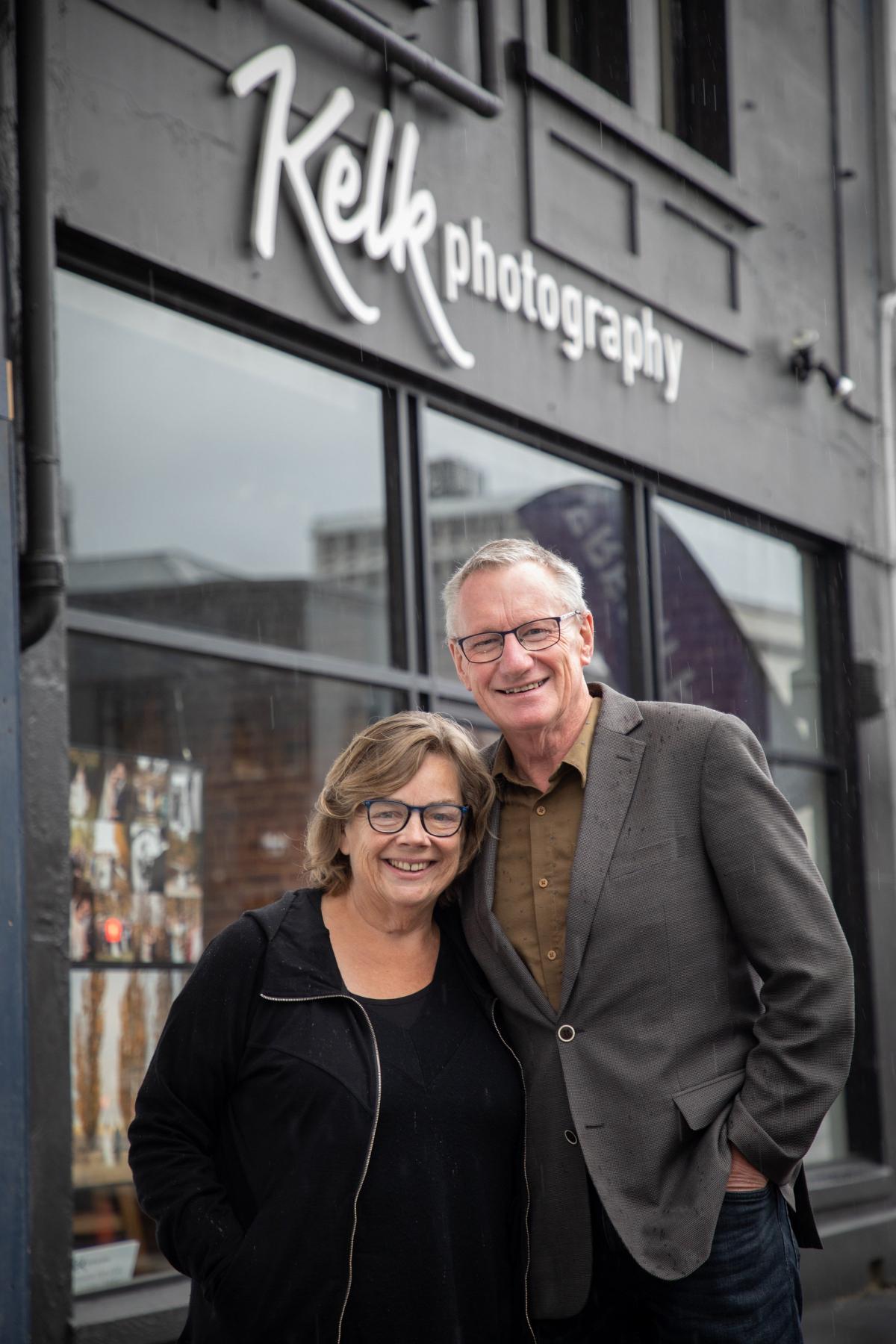 What started as hobby turned into a long life business for Barry Kelk and Kerry Crosland, of Kelk Photography. Now they are handing it over to the next generation. The couple talk to business reporter Riley Kennedy about capturing the special moments in people’s lives.

That is how Barry Kelk describes his first year as a business owner in the early 1980s.

After nearly a decade teaching at Otago Boys’ High School, the Dunedin man took the plunge in 1982 and started Kelk Photography.

Now, 40 years later, he and his wife Kerry Crosland have handed the reins of the business on to the next generation.

Mr Kelk never considered photography a job — it was a “professional hobby” that started at a young age.

For his seventh birthday, his mother gave him a Box Brownie camera — a basic cardboard box camera with a simple lens that took square pictures.

Four years later, on his 11th birthday, she gave him a home developing kit which enabled him to make contact prints, which he did in the house laundry.

While a pupil at Otago Boys’ High School, he took photos for the school magazine.

“It’s just a hobby that grew into a business,” he said.

It was also a hobby for Mrs Crosland.

Her attraction to photography grew from being able to record special moments in people’s lives.

“It’s a way of recording things that happen without painting or drawing it, which I had absolute zero skill in,” she said.

Mr Kelk said that when he was not in the classroom during his teaching years, “you probably could have found me out somewhere with a camera in hand”.

He did his first paid wedding in 1972 and “the couple are still happily married, but not because of the photography”.

By the end of 1981, he realised all his spare time was spent taking pictures and decided to make it his full-time job and started Kelk Photography.

Initially taking a year’s leave of absence, he planned to give it 12 months and if it did not work he would return to the classroom.

He started the business from his home in Dunedin.

After a few years working from home, he moved into the company’s first premises, in George St.

In 1990 it moved to the present premises in Great King St, a site Mrs Crosland was the third generation of her family to occupy.

Her father and grandfather had hardware store G J Swann on the site before that business moved to South Dunedin.

During Kelk Photography’s first year, the University of Otago’s business school profiled it for a documentary about getting started in business.

“It turned into how not to get started in the film business.

“We were almost bankrupt.”

Looking back, Mr Kelk said he was “so naive” and “probably a bit ignorant” in his first year.

He had not been focused on the business, and had been too intent on spending the little money he had on equipment.

Mr Kelk believed it was the people making the documentary who helped him turn the business around, teaching him he could not just be creative all the time, but also had to pay bills.

“It was them who stopped me from having to return to teaching full-time.”

He admitted he had to step back “with my tail between my legs” to get help.

“The bank cut me some slack and I got things in the right order.”

He did a business management course at Otago Polytechnic, which he described as “huge, revolutionary even” and was away.

The couple were recently sorting though boxes and found old financial statements from that period.

“It was quite sad really looking at what we had spent and what we had earned,” Mrs Crosland said.

They did not come close to losing the business because “we had nothing to lose”, Mr Kelk said.

Fortunately at that stage the business was still run from home so it had limited expenses.

Mr Kelk managed the business for about 20 years until he followed a calling as a church minister — a job he also only recently finished doing.

When he started his ministry he moved to part-time work at Kelk Photography, while Mrs Crosland managed the business.

One of the biggest challenges the business had faced over its time was deciding when to switch to digital, which was quite a big investment.

The business had a large colour laboratory which meant it was printing its photos, while others had to send film away to be processed.

To change to digital in its early days would have meant it could no longer print its own photos, and also digital cameras were very expensive at the time.

The couple held off making the switch for about five years, which ended up being a “very good decision”.

It meant they could continue making prints cheaply and by the time they made the change, technology had improved and was not so expensive.

The business’ “bread and butter” was taking traditional photos at schools and sports clubs.

Mrs Crosland said weddings and family portraits were an added bonus for the couple, particularly because they, as photographers, got to express their own creativity,

She described doing a wedding as “nerve-racking, but also a lot of fun”.

“Unlike other shoots, you’ve only got one chance … Chances are the couple won’t be getting married again.”

The key to being a good wedding photographer was being able to calm people in what could be a nervous situation, she said.

Mr Kelk was amazed at how technology had changed over his career.

The benefit of going digital was that photographers could immediately see the photo, when traditionally they would have to wait a few days until it was processed.

Forty years ago, shoots were done with a “heavy camera” lugged around the venue with “massive lenses”.

Now, Mr Kelk could fly a drone, controlled from his cellphone, and take an even sharper photo than before.

“If I said to you 40 years ago that that was possible, you would have thought I was off the planet,” he said.

While that was fine for corporate-style photos, family portraits were meant to be more special to people.

“Until it’s printed it’s not a photo, it’s just a bunch of pixels in a file on your computer.”

When Mrs Crosland started in photography, it was a very male-dominated industry.

Women traditionally processed the colour photos and put the orders together, she said.

“That has all changed now.

“I’d say it’s even opposite, which is good.”

Mr Kelk’s highlight of the 40 years was seeing his wife “blossom” after taking over the management of the business.

“Seeing her grow, not just as a photographer, but also a manager was fantastic.”

He credited her for his being able to take the time to train to be a minister.

“That was very important to me and she enabled that to happen.”

The loyalty of the Dunedin community was also a big part of the business’ success.

The Green Island Junior Football Club was its longest-standing client — the company had taken its photos since 1976.

Kelk Photography had also had other clients for as long as 30 years.

“We would not have survived without those people’s loyalty,” Mr Kelk said.

“We are so grateful.”

The couple officially handed the reins over to long-serving staff member Nicola Wilhelmsen at the end of March.

They had been thinking about retirement for a while and letting the next generation come through “with their burst of creativity”.

“We were at an age where we could still go off and do things, but it probably took us a little longer to both get on the same page,” Mrs Crosland said.

In terms of what was next for the couple, Mrs Crosland would continue to help Mrs Wilhelmsen with some contract photography.

Mr Kelk hoped to make photography a hobby rather than trying to sell it.

“It’s back to creativity for ourselves now,” he said.

Speaking from their new home in Bannockburn, in Central Otago, earlier this week, Mrs Crosland said she could sit at the kitchen bench and watch cyclists go past on the new cycle trail.

“You couldn’t ask for much better than that.”

Mr Kelk believed it was better to get out of something when they were ahead rather than be pushed or have failed.

“We made the decision to go on our terms rather than the business collapsing because we were too old and crusty.

“You’ve got to know when to leave and we think we have left at the right time.”