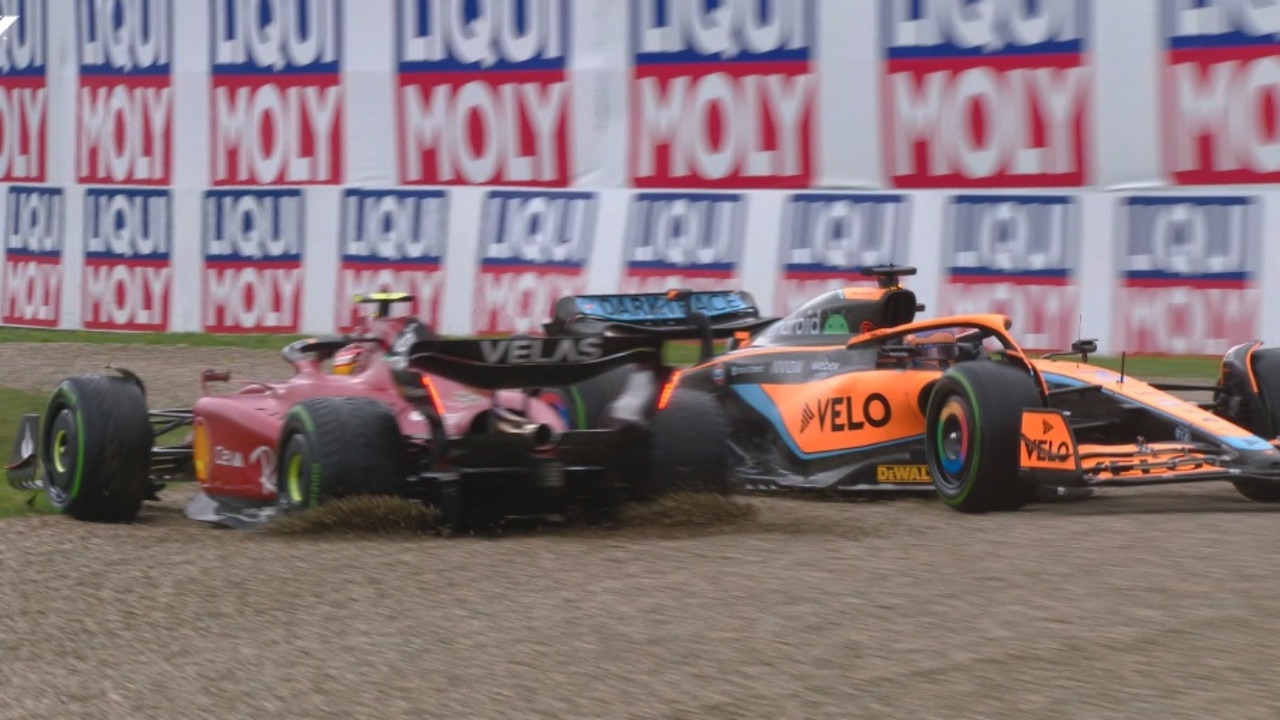 Daniel Ricciardo has been caught up in some early drama at the Emilia Romagna Grand Prix that ended badly for the Aussie.

Red Bull’s Max Verstappen will start on pole position after he won Saturday’s sprint race, which doubled as qualifying for the race proper.

He passed Ferrari’s Charles Leclerc in the dying stages of the sprint to set the scene for another riveting battle between the pair.

Leclerc leads the drivers championship by 34 points and Verstappen, who has failed to finish two of the three races so far, will be desperate to win to gain ground on Leclerc in the championship battle.

Daniel Ricciardo will start from sixth on the grid alongside his McLaren teammate Lando Norris.

The Australian had a solid performance in the sprint despite technical issues with his car preventing him from completing any practice laps beforehand.

Chaos in the pits

There was chaos in pit lane when drivers rushed to change from intermediate to slick tyres as the track dried in Imola.

Languishing in last place, Daniel Ricciardo had nothing to lose and was the first to switch tyres and immediately saw the benefit.

He is now up to 15th but will struggle to get in the points.

Alpine’s Esteban Ocon bumped into Lewis Hamilton as they were emerging from their pit stops.

Ocon should have let Hamilton through and copped a five-second time penalty for his troubles.

Max Verstappen leads the race ahead of his teammate Sergio Perez and Charles Leclerc.

Ricciardo off the track in early disaster

The race is underway and Daniel Ricciardo has had a disastrous start, colliding with Ferrari’s Carlos Sainz on the opening corner.

Sainz moved up alongside Ricciardo and went the long way around to try and overtake him, but the McLaren held his ground and the pair clipped their wheels and went off the track into the gravel.

Sainz couldn’t get back on the track and was ruled out of the race in a complete disaster at Ferrari’s home race.

Luckily for Ricciardo, he managed to drive back onto the track and went into the pits to get fresh tyres.

The incident triggered a safety car but Ricciardo was not penalised. He fell down to 19th place.

Commentator Paul Di Resta said on Sky Sports: “It is more Daniel’s fault, just unfortunate where they are though.

“But I don’t think there’s much you can do about it. If they’re not allowed to do that, I think you’re not going to see close side by side racing.”

Lewis Hamilton’s season is already over

Mercedes is in dire straits and both Lewis Hamilton and George Russell will start from the bottom half of the grid.

Hamilton admitted Mercedes have no hope of defending their constructors title this year after he qualified 14th, three places behind Russell.

“We are obviously not fighting for the championship this year — first of all we have to understand this car and improve and make some progress through the year,” he said.

“That’s all we can hope for.

“We are all working hard and there are a lot of people in the team who have been here for 20 years — so it’s not new for them.”

Drivers will have to contend with a wet track in Imola after it was hammered by torrential rain.

The race is set to get underway at 11pm (AEST).