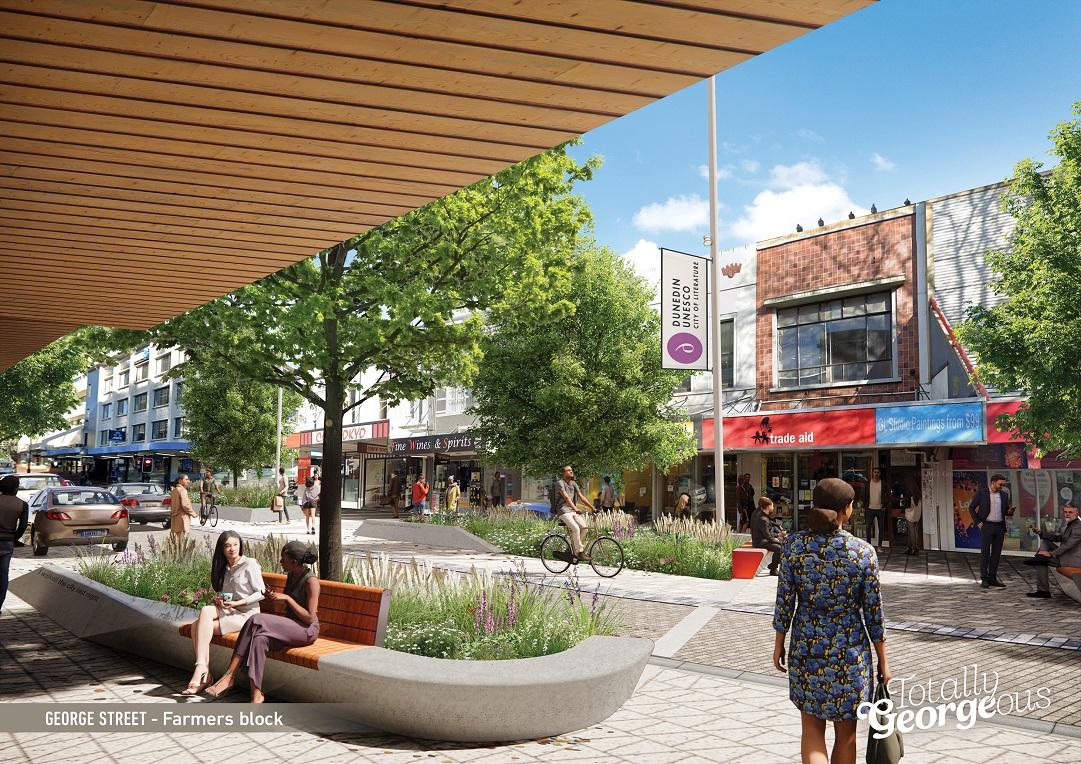 Detailed designs for a makeover focused on Dunedin’s main shopping street have been largely embraced by the city’s elected representatives.

Cr Chris Staynes said the design concept was exceptional, reflecting a genuine effort to work with mana whenua on a major project.

Mayor Aaron Hawkins said the planned $28.2 million upgrade of George St and nearby streets would transform the city centre into an inclusive, accessible destination – not a thoroughfare – for everyone.

Cr Steve Walker said he had seen negative comments, but they were outnumbered by those from “an excited public embracing something truly transformational” – a vision fit for a confident, progressive city.

They were discussed at length during a special meeting of the Dunedin City Council’s planning and environment committee today and were mostly received warmly.

Two notable naysayers were councillors and mayoral aspirants Jules Radich and Lee Vandervis and they voted against noting the report that updated the committee on development of the designs.

Cr Radich has been a critic of the planned shift to one-way traffic in George St and what he has described as lack of sufficient attention to the priorities of shop proprietors and shoppers.

The planned street layout was on “the wrong side of history” and it would take the city back to the 1950s, he said.

That prompted Mr Hawkins to say there was an option that would lurch the city back to the past, “but it isn’t this one”.

Cr Vandervis said he was beginning to understand how it was possible to fritter away $28 million on surface treatments for George St.

He could see some advantage in the plans for cafes selling over-priced drinks, but the “supposed upgrade” would create a permanent traffic snarl and constriction of access to George St, he said.

“We need a vibrant retail centre and this plan does not give it to us.”

Mr Hawkins said denigration of the hospitality sector, after what it had endured in the past two years because of the Covid-19 pandemic, was a remarkable thing to witness at a city council meeting.

The meeting revealed what seemed to be a shift in sentiment among elected representatives about the upgrade.

Cr Andrew Whiley, who was not a supporter of one-way traffic in George St, said matters had moved on since the council’s vote on that in September last year.

“This will be a first-class street,” Cr Whiley said.

* Earlier reports from the Otago Daily Times suggested underground works were part of the $28.2 million budget for the upgrade. This budget applies to the revamp of the surface, and a separate budget relates to replacement of underground infrastructure.