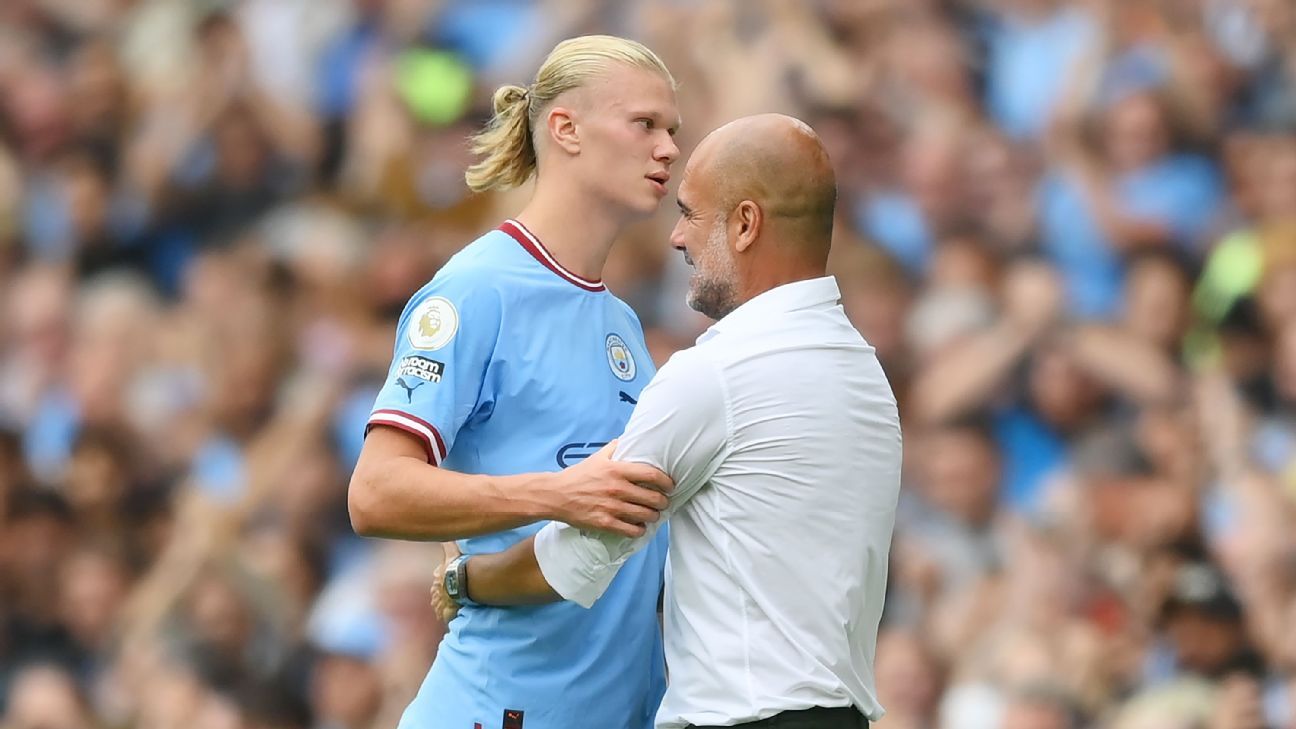 Pep Guardiola said Erling Haaland has the talent to break the records set by Manchester City‘s all-time goalscorer Sergio Aguero following his hat trick in a 6-0 win over Nottingham Forest on Wednesday.

Haaland became the first player to score nine goals in his first five Premier League appearances after scoring his second hat trick in as many games, beating Aguero’s record, shared with Mick Quinn, of scoring eight times in his first five games in England’s top flight.

The Norwegian’s triple also marked the first back-to-back hat trick in the Premier League since Harry Kane did it for Tottenham Hotspur in 2017, after he scored three against Crystal Palace on Saturday.

And Haaland’s start to life at the Etihad Stadium has already begun the debate about whether he could end up breaking the City goalscoring record of 260 across all competitions set by Aguero.

“Sergio is the legend,” Guardiola said. “Nobody can break the position in the hearts of City fans, scoring the most important goal in the modern history. Erling has the quality to be there.

“What Sergio has done is amazing. But Erling has this talent. When City bought Erling, everybody talked about what he has done in the past. What we wanted to do is help him. Hopefully he can enjoy and score more goals.”

However, Guardiola added that Haaland will only consider his time at Manchester City a success if he wins trophies, even if he goes on to break goalscoring records.

“What he has done in Norway, Austria and Germany he tries to do here,” Guardiola said. “The first ball contact, he scores a goal. We knew it.

“He always scores goals. He is stoppable when we don’t play good. We try to play in a decent way for the fact that we create opportunities for our talented players up front to score goals.

“I think what we want is to win the titles. Knowing him a little bit, I don’t know if he’d be happy breaking records if we didn’t win titles. If we play good, he’ll have more chances.”

“Both have settled in a way I could not expect, especially Julian from Argentina,” Guardiola added. “You see how he is doing. He struggled to find the pace in the first half. But the goals, when he is close to the goal, oh my God. So precise. So good. They are both incredible finishers.”

The three points against Forest put City in second in the Premier League with 13 points from five games, two behind leaders Arsenal, who are enjoying a perfect start to the 2022-23 campaign.