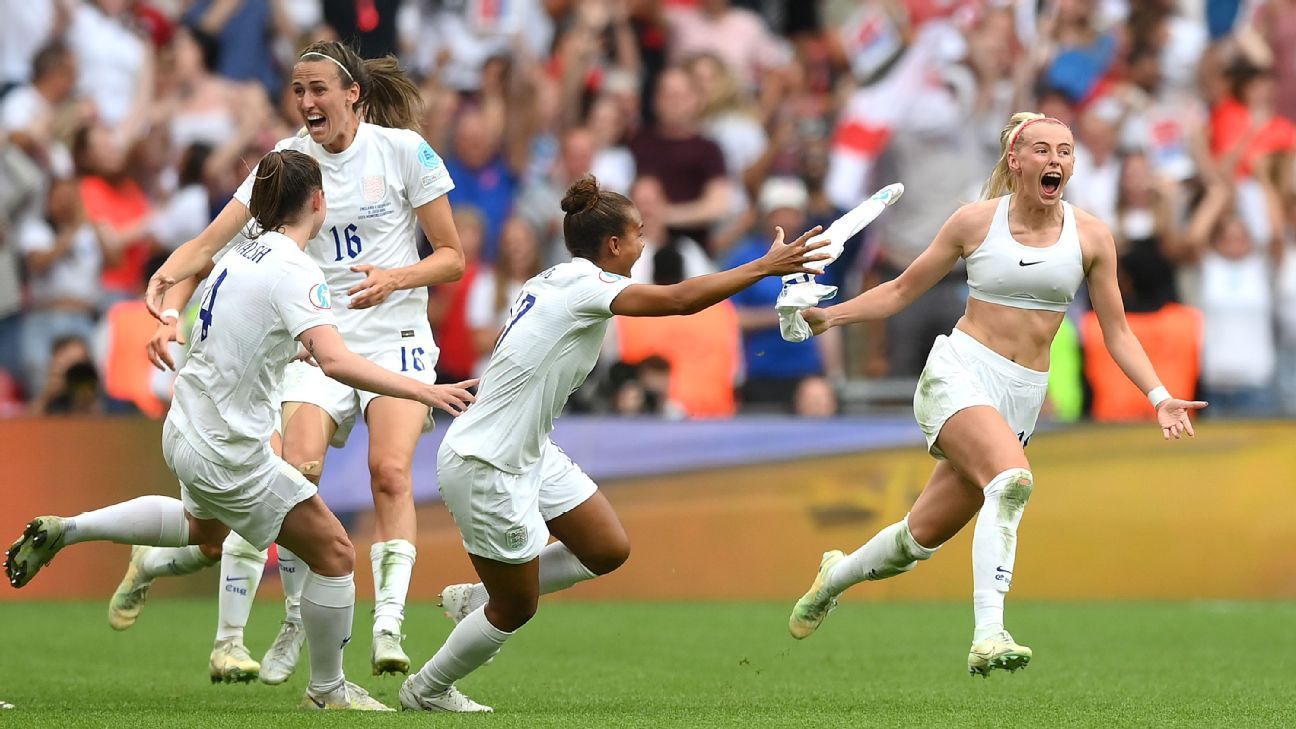 England ended their wait for a major trophy as Chloe Kelly’s extra-time winner handed them a 2-1 win against Germany in the women’s European Championship final.

Watched on by a record-breaking crowd of 87,192 at Wembley, England went ahead through substitute Ella Toone before being pegged back by Germany’s Lina Magull.

But Kelly provided the perfect finish for England after coming on as a substitute herself, giving the Lionesses their first major tournament triumph and England’s first for men or women since the 1966 World Cup.

Consistency had been key for England in their run to the final, so it was no surprise when manager Sarina Wiegman named the same starting XI for a sixth consecutive match — the first team to do that in men’s and women’s Euro history.

But Germany were rocked when their top scorer Alexandra Popp was pulled from the starting lineup before a ball had been kicked after suffering muscular problems in the warm-up, replaced by Lea Schuller.

That gave England a boost, and they almost had the perfect start early on when Fran Kirby curled in a cross for Ellen White which the Lionesses’ record scorer headed straight at Germany keeper Merle Frohms.

But it was Germany who almost went ahead in the 25th minute after a goalmouth scramble from a Magull corner. Germany defender Marina Hegering threatened from close range, before England keeper Mary Earps claimed to see off the danger. Wiegman’s side were relieved when a VAR check for handball came to nothing.

England finished a fractious first half strongly and could have gone in front themselves in the 38th minute when Beth Mead found White with a cut-back into the area, but the striker fired over with a left-footed shot as she stretched to make contact.

With the momentum shifting towards the hosts, Germany manager Martina Voss-Tecklenburg made an early substitution at half-time, bringing on Tabea Wassmuth for Jule Brand.

That change gave Germany renewed purpose, and they fired a warning shot when Magull flashed a good chance wide of Earps’s right-hand post in the 50th minute after a clever turn in the box.

Wiegman sensed danger and duly sent on her two super substitutes, Toone and Alessia Russo. And it was Toone who fired England ahead in style in the 62nd minute, running onto a fine through ball from Keira Walsh before lofting a finish over Frohms to send Wembley into delirium.

Germany rose to the challenge, and they nearly equalised when Magull darted into the box in the 66th minute. Her right-footed shot clattered the crossbar, before Schuller failed to turn in on the rebound.

Magull had been Germany’s liveliest player, and she finally made the difference in the 79th minute. Wassmuth sent a low cross into the area, and Magull side-footed home at the near post to temporarily silence England fans.

Frohms turned away Toone’s shot from distance with her feet in extra-time, before Kelly sent England into dreamland again in the 110th minute. Lauren Hemp’s corner fell to the Manchester City forward, who first fired at Frohms before stabbing in the rebound. After a brief moment of confusion, Kelly ripped off her shirt and celebrated wildly.