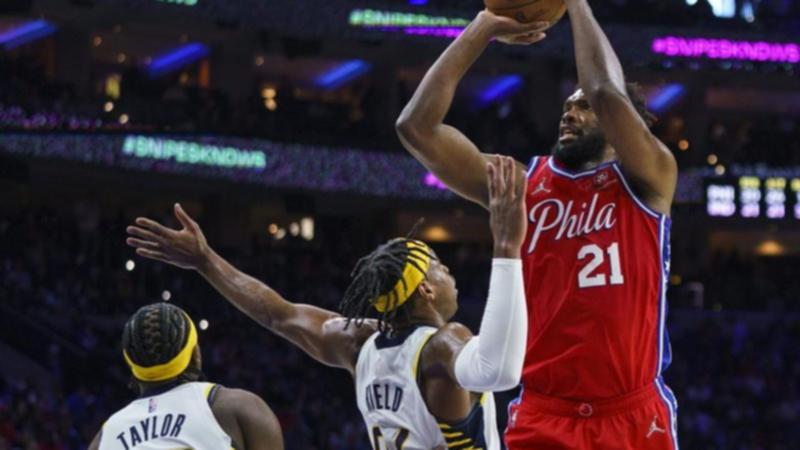 Joel Embiid has added weight to his MVP push and all but wrapped up the NBA scoring title, scoring 41 points while adding 20 rebounds and four assists to lead the Philadelphia 76ers to a 133-120 victory over the Indiana Pacers.

Embiid shot 14 for 17 from the floor, went 11 of 15 from the foul line and made both his 3-point attempts in a game that Philadelphia (50-31) needed to win to remain alive in the hunt for the third seed in the Eastern Conference playoffs.

It was the first time this season that an NBA player scored 40 or more points and had 20 or more rebounds in a game.

It was the third time in Embiid’s career it has happened — with all three times coming against the Pacers.

“I’ve always said that every single night, I want to dominate,” Embiid said.

“If you are dominating, things can show up in a lot of different ways — whether it is offensively or defensively. Sometimes, the numbers don’t show it. But it’s good, I guess.”

Philadelphia coach Doc Rivers said: “It’s methodical and historical. Whatever the calls you want to put on it, it’s what’s he’s been.”

James Harden had 22 points and 14 assists for Philadelphia, who also got double-digit point performances from Tobias Harris (18), Tyrese Maxey (18) and Danny Green (15).

Oshae Brissett scored 20 points and Tyrese Haliburton had 19 for Indiana (25-56), who lost their ninth straight game.

The Pacers fell behind by 21 points in the first half, then cut the deficit to five late in the third quarter before Embiid and Harden began to take control of the game.

“We haven’t seen a guy like this in the history of the league who has this kind of power and skill,” Indiana coach Rick Carlisle said of Embiid.

“He’s able to score on all three levels effortlessly. He’s an amazing player and it will be interesting to see what teams do in the playoffs to try to slow him down.”

Embiid is now averaging 30.6 points for the season, which is just ahead of LeBron James’ 30.3-point-per-game clip for the Los Angeles Lakers and Kevin Durant’s 30.1 average for the Brooklyn Nets.

But neither James nor Durant will play enough games to qualify for the statistical title; in an 82-game season, 58 games played is the minimum.

Embiid is considered one of main contenders for league MVP along with Milwaukee’s Giannis Antetokounmpo and Denver’s Nikola Jokic, last year’s winner.