Mobile phone giant Samsung has been slapped with a $14 million fine over claims its phones could safely be submerged in water.

Samsung Electronics Australia Pty Ltd admitted misleading consumers about the suitability of various Samsung Galaxy phones to be submerged in pool or sea water, in proceedings brought by the ACCC at the Federal Court.

Adverts even claimed the phones could take ‘selfies’ underwater. 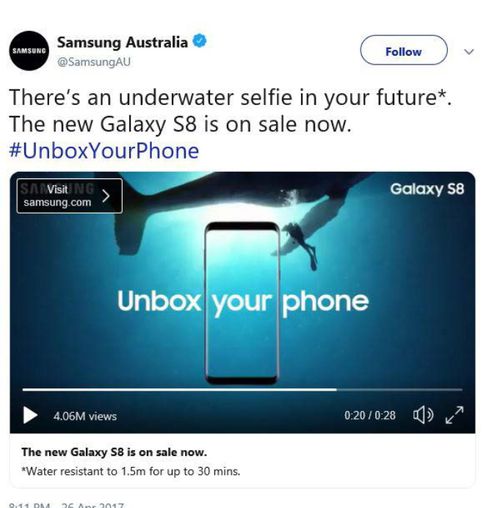 However the ACCC said the firm admitted if they were submerged in a pool or the sea water it was possible the charging port would corrode and stop working if the phone was charged while wet.

“Samsung Australia’s water resistance claims promoted an important selling point for these Galaxy phones. Many consumers who purchased a Galaxy phone may have been exposed to the misleading ads before they made their decision to purchase a new phone,” ACCC Chair Gina Cass-Gottlieb, said.

“Samsung Australia’s ads promoting its Galaxy phones featured people using their phones in pools and sea water, despite the fact that this could ultimately result in significant damage to the phone.

“This penalty is a strong reminder to businesses that all product claims must be substantiated.”