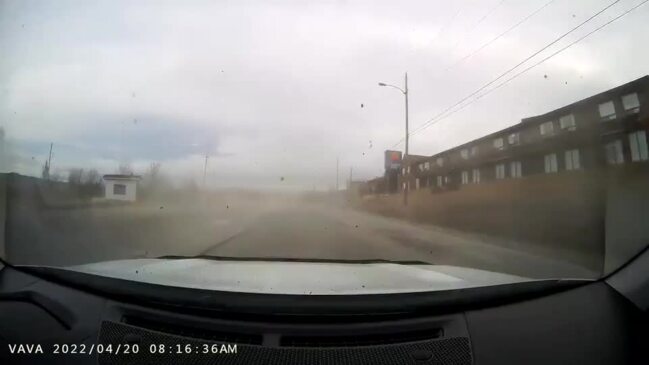 Strong winds carried dust through Newfoundland and Labrador on Wednesday, April 20, as parts of the region saw gusts exceeding 100 km/hour, according to reports. Donnie O’Keefe said this dashcam footage was recorded in Corner Brook, on the west coast of Newfoundland. Video shows dust and particles flying as O’Keefe drove at 8:16 am Wednesday morning. “Not the snowstorm I like,” O’Keefe wrote on Twitter. Wind warnings were in effect for parts of western Newfoundland through Wednesday, according to CBC. Gusts exceeding 100 km/hour (approximately 62.1 miles/hour) were reported Wednesday on the Trans-Canada Highway as drivers between Tompkins and Cape Ray were urged to pull over. Credit: Donnie O’Keefe via Storyful