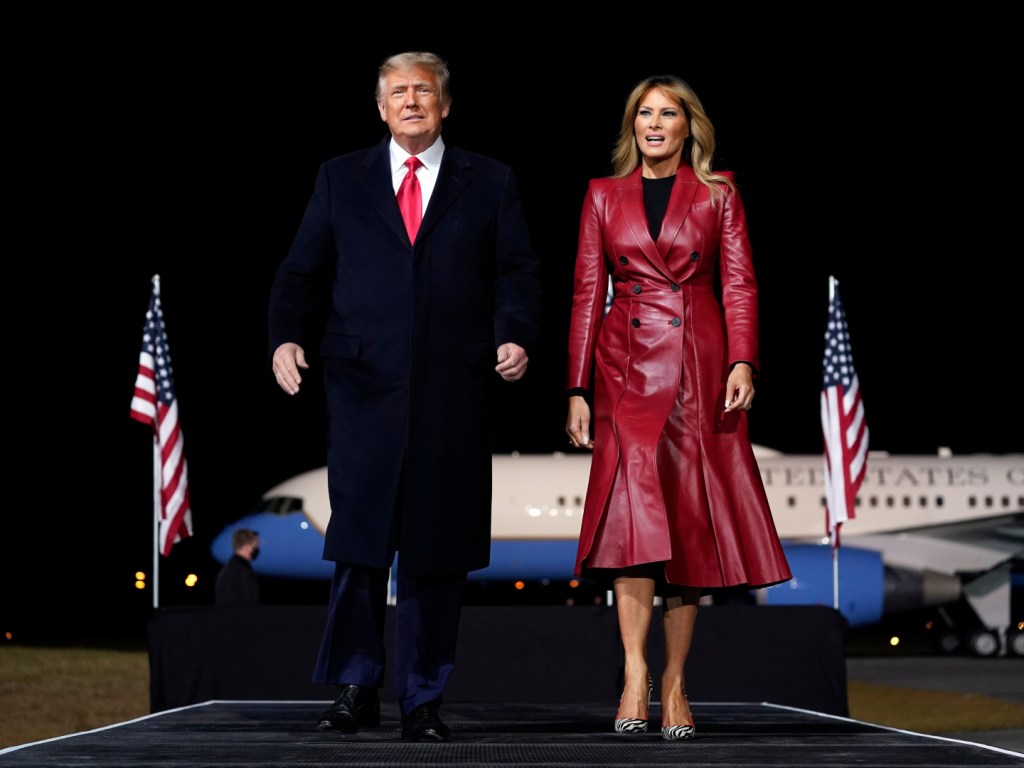 In the wake of Ivana Trump’s death on July 14, there were rumors that Melania Trump was going to avoid attending the funeral because the two women reportedly didn’t like each other that much. That story was squashed as Melania arrived in New York City with husband Donald Trump at their Trump Tower residence on Monday, July 18.

Wearing a crisp white shirt, black pants, and mirrored sunglasses, Melania stepped out of a dark SUV with the former president. (See the photos HERE.) Donald Trump wore his usual oversized suit and red tie and scurried into the building quickly to avoid the throng of crowds and photographers. Ivana’s funeral services are on Wednesday and, likely, the couple is there to support his adult children, Donald Jr., Ivanka, and Eric over the sudden loss of their mother.

Ivana was never a shy personality, she always made her opinion heard, which sometimes irked those in the Melania camp. While promoting her memoir, Raising Trump, in 2017, Ivana made a declaration that probably sent a few people in the White House into a tizzy. “I’m basically first Trump wife, OK? I’m first lady, OK?” she told Good Morning America. The former first lady’s spokesperson made sure to hit back with a very pointed statement, saying, “Mrs. Trump has made the White House a home for Barron and the President. She loves living in Washington, DC and is honored by her role as First Lady of the United States. She plans to use her title and role to help children, not sell books. There is clearly no substance to this statement from an ex. Unfortunately only attention-seeking and self-serving noise.”

It probably didn’t help that Ivana claimed she had a direct line to her ex-husband and often gave him advice while he was in office. “I suggest a few things,” she told the New York Post. “We speak before and after the appearances and he asks me what I thought.” Donald Trump never confirmed her assertions, but Melania likely wanted all Ivana chatter done after their public bickering over her book. Ivana certainly added quite a bit to the colorful conversations about the Trump family and Melania is showing up to honor a woman who certainly wasn’t her BFF but was the beloved mom to her adult stepchildren.

Before you go, click here to see photos of Donald Trump’s family over the years.