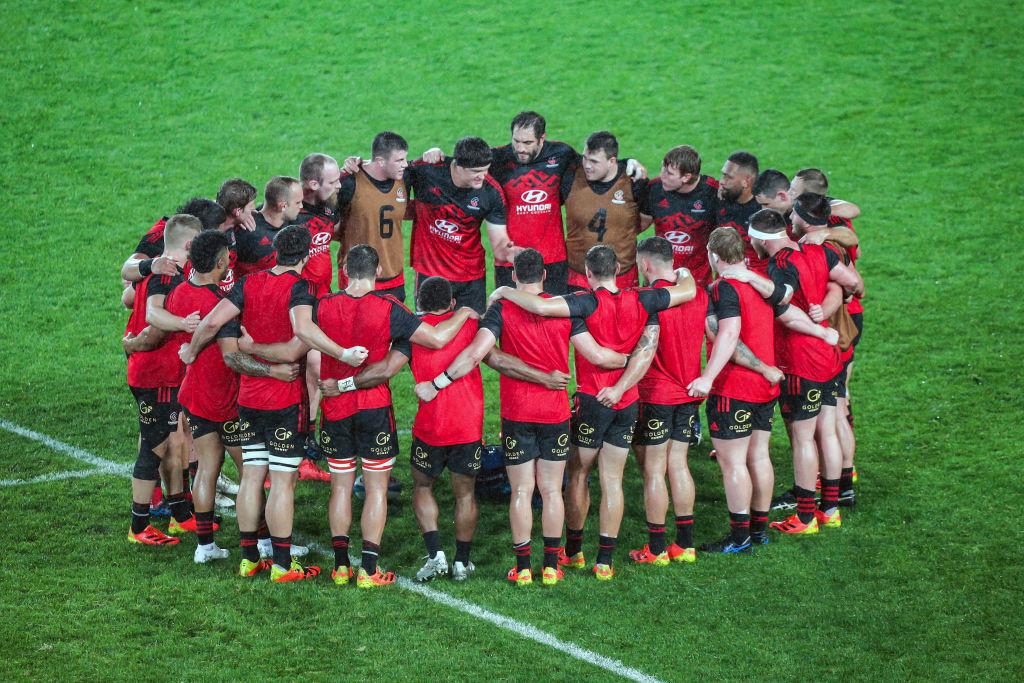 The Crusaders have once again taken Super Rugby honours in tonight’s Super Rugby Pacific final victory over the Blues at Eden Park.

The red and black dynasty reigns supreme – again. Six titles in six years. Thirteen in total. This one is sure to leave lingering scars for the Blues, too.

Given that formidable record we should not be surprised but coach Scott Roberton’s Crusaders produced as clinical a wet weather finals performance as you will witness to leave an initially feverish 43,000-strong crowd longing for a hot toddy and a romantic novel with a guaranteed happy ending.

Locals flocked to Eden Park, selling this highly-anticipated finale out in five hours, in spite of conditions to ride a wave of hope that Leon MacDonald’s four-year evolution of the Blues was about to climax.

Super Rugby Pacific’s inaugural season has its first champion, one familiar with setting the benchmark.

A Finlay Christie moment of defensive brilliance, forcing an error from Crusaders No 8 Cullen Grace on his line to score, sparked visions of a belated comeback from a 16-0 deficit for the Blues.

Sevu Reece’s 75th minute try, the Crusaders second of the night, was the final dagger blow that seemed inevitable from the opening exchanges.

The Crusaders enjoy the spoils of victory after beating the Blues. Photo / Getty

And so, the Blues’ 19-year wait for their fourth fully-fledged Super Rugby crown goes on.

On a night not suited to running, expansive rugby the Blues did little right. Ten botched lineouts tells the sorry story over their bumbling effort. The only surprise of Soane Vikena replacing Blues hooker Kurt Eklund early in the second half was that it took so long.

While the Blues handling, accuracy, composure all deserted them when it mattered most to blow this season’s 15-game unbeaten run, the Crusaders delivered their methodical best.

Through their maul and a brilliant tactical display from Richie Mo’unga, who grabbed the game by the scruff to dominate the first half especially, the Crusaders put the controlled squeeze on the Blues.

With a Mo’unga drop goal, penalties, close-quarter pick and drives and a sustained attack on the Blues right side defence, it was death by a thousand cuts.

Scoreboard pressure, expectation, all weighed heavily on the Blues. Try as they might, they just couldn’t get anything going.

The 216 to 131 lopsided tackle count offers yet another example of the Crusaders dominance. They held the ball, dictated terms and took their chances.

Robertson’s men have been far from vintage at times this season. Successive performances against the Reds in Christchurch, including the quarter-final, were underwhelming but they again proved their prolific qualities of rising for the big occasion.

But for a final-quarter revival, when the Blues finally sparked into life, this contest was all the Crusaders.

The Blues were largely unable to build any form of sustained phase play – a credit to the resolute Crusaders defence that made 222 tackles last week against the Chiefs but also a reflection of the Blues consistent inaccuracy.

The Crusaders celebrate Sevu Reece’s try in their win over the Blues. Photo / Getty

Eklund and the Blues lineout had a first half to forget, losing six of their 12 throws in a theme that continued deep into the second spell. Some of those issues can be attributed to Sam Whitelock and Scott Barrett but it was also symptomatic of the Blues wilting under finals pressure.

Mo’unga pulled the strings brilliantly for the Crusaders. From an early snap drop goal to a break that featured two dummies and pinpoint tactical kicking, Mo’unga put on a clinic.

From a Blues perspective Mo’unga was afforded far too much time and space, which allowed the Crusaders to dominate territory throughout.

David Havili, who outshone Roger Tuivasa-Sheck before he was replaced just after the break, supported the tactical kicking approach to help shape the back field and pull off one 50-22.

The Blues were fortunate not to turn further than 13-0 behind at halftime. They needed a desperate Mark Telea tackle to push Codie Taylor out on the corner and Leicester Fainga’anuku was also held up over the line.

Referee Ben O’Keeffe displayed leniency in allowing two TMO interventions for head contact to play on but Crusaders midfielder Jack Goodhue, after clashing heads with Tuivasa-Sheck, should have undergone an HIA assessment. That he did not goes against all protocols.

Only once did the Blues manage to venture into the Crusaders 22 in the first spell and, when there, they butchered a lineout five metres out from the line.

Handling in contact from the Blues was also poor. Even when they managed to retain possession the ball at the base was often scrappy for Christie.

As the Crusaders rightly rejoiced at the final whistle, the stark contrast in emotions was evident for the Blues.

They are sure to be back next season with a point to prove but this was a brilliant season washed away at the final, immovable hurdle.