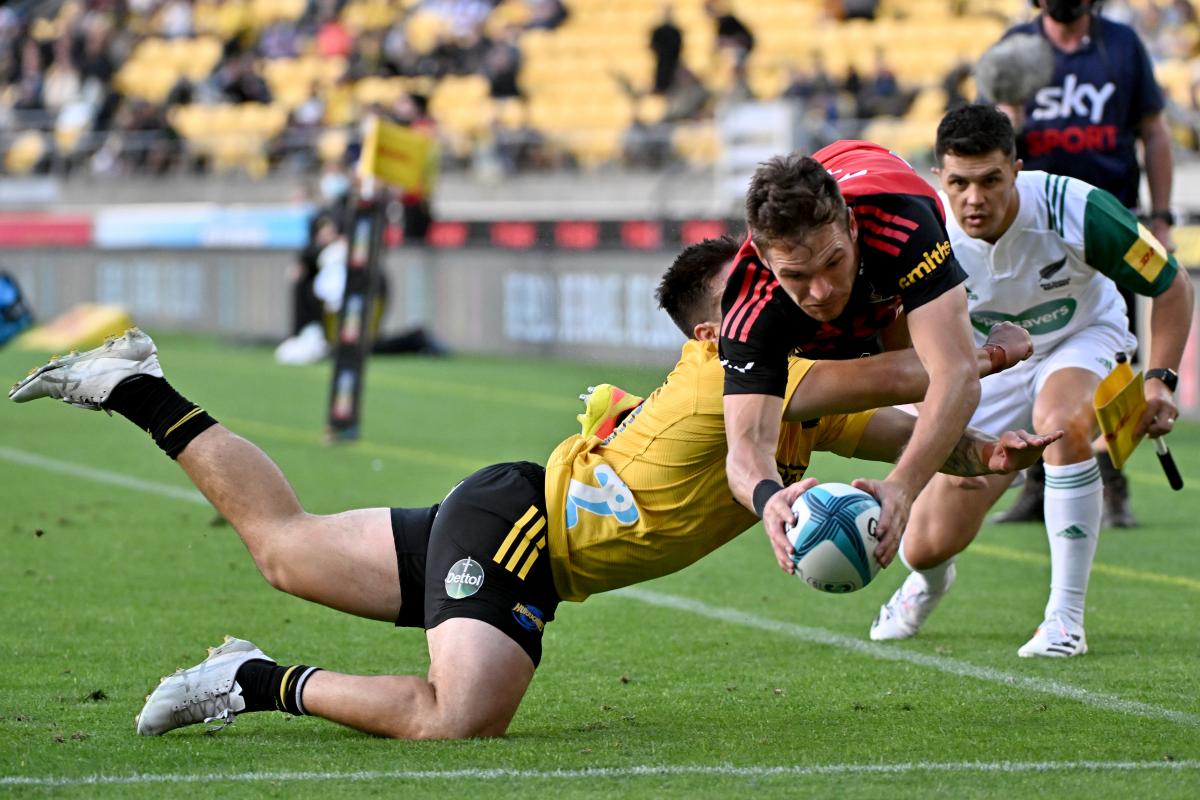 Ardie Savea wants the referees to raise their game, after a controversial finish to the Hurricanes’ 24-21 loss to the Crusaders on Saturday night.

Awarded a penalty with time up on the clock, the Hurricanes boldly opted to kick to touch rather than take a potential tying penalty goal as they searched for the win. The ensuing lineout throw was contested by Crusaders captain Scott Barrett, who did not win the throw and appeared to tackle Savea in the air, before subsequently preventing the ball from being distributed at the ruck, which ultimately brought an end to the game.

Savea protested to referee Brendon Pickerill, asking if he could check with the TMO, but Pickerill responded: “there’s nothing there.”

It brought a sour end to an otherwise enthralling contest and, speaking to Sky Sport, Savea voiced his frustrations after the match.

“I’ve got to take a breath, mate. I’m lost for words. I’ve seen some calls that go the other way, but unfortunately it didn’t happen,” he said.

“As a leader, I like to put pressure on and demand from the officials, making sure they’re doing everything they can to get these calls right. So, without sounding disrespectful, I just would love to have the officials demand better.”

The Hurricanes were forced into some late changes coming into the game, with halfback TJ Perenara and hooker Asafo Aumua late withdrawals. But the backup brigade did a superb job in their place, with Jamie Booth making a number of big plays at halfback and providing good service from the ruck, while James O’Reilly was strong at set pieces and made some damaging runs.

For the most part, it was the Hurricanes who were standing out. Ardie Savea was immense in all areas, Jordie Barrett’s transition into the No 12 jersey continues to pay dividends as the talented back gets his hands on the ball a lot more and creates chances, while Julian Savea took it upon himself to run over the top of as many defenders as possible.

For the Crusaders, coach Scott Robertson will be extremely happy with the work of his loose trio as his side go to the top of the table. Each of Ethan Blackadder, Tom Christie and Cullen Grace had good moments on attack and defence. It was the defensive work that was most significant; all three made double-digit tackles and won a turnover, while centre Braydon Ennor also made some big defensive plays.

But it was fellow All Blacks backline threat Will Jordan who kicked things off for the Crusaders. After an early penalty put the Hurricanes ahead, Jordan made the most of a linebreak from David Havili, who found Grace in support and he in turn put Jordan into space to outpace Barrett to the line.

The Hurricanes hit back in similar fashion, with Du’Plessis Kirifi the benefactor and putting his side up 8-7 after 13 minutes.

The sides looked set to go blow for blow, as they traded almost mirror image tries soon after.

The Crusaders got ahead again through Quinten Strange – who later left the pitch due to a non-contact injury. Given good field position thanks to a penalty and a kick to touch, the ensuing lineout play was well executed, with the Crusaders coming off the back of a drive and spreading the ball. They had the numbers, and Strange made sure they got the points.

The Hurricanes also scored from a well-executed lineout play. A penalty allowed them to kick to corner, and they took a short lineout and quick throw, before moving it immediately. A huge charge from Ardie Savea set them at the base of the posts, before Booth moved the ball to Jackson Garden-Bachop, who summed up the situation well, finding Josh Moorby on the wing. He did the rest, and the Hurricanes went ahead again.

Penalties were costing the Hurricanes, however, inviting the Crusaders into attacking position. Another penalty and kick to the corner for the Crusaders allowed them to run another lineout play, which ultimately saw George Bridge score with a beautiful finish in the corner.

The Hurricanes maintained an 18-17 lead at the break – extending that by three early in the second half – but again, the penalty-kick to corner and lineout play sequence worked for the Crusaders, and Ethan Blackadder was soon over the line.

Both sides had their chance throughout the second half, but defences won and the solitary try in the half was enough for the Crusaders to cling to the win.