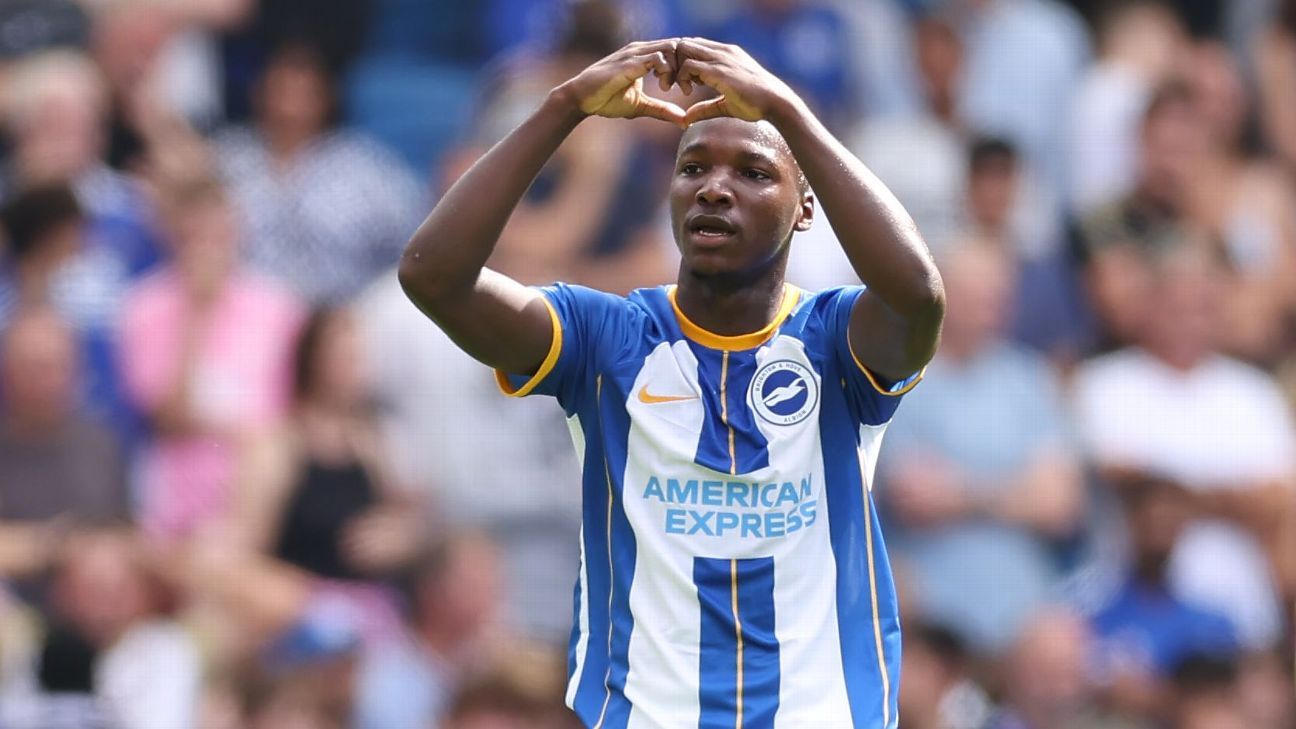 Brighton are set to begin contract talks with Moises Caicedo amid concerns over a possible approach from Chelsea, writes The Sun.

The Blues were linked with the 20-year-old midfielder in the summer, and after coach Graham Potter made the switch from the Amex Stadium to Stamford Bridge, the Seagulls believe that he could be tempted to follow his former manager in January.

The Ecuador international has caught the attention of a number of clubs this season after his performances in the Premier League have helped his side into fourth place. It’s reported that he could now be offered a significant salary increase in a bid to encourage him to remain on the south coast.

Caicedo has become a regular starter for Brighton since joining in February for £4.5 million from Independiente del Valle, after Yves Bissouma‘s place in midfield was freed up by his move to Tottenham Hotspur.

13.42 BST: Sport reports that Barcelona still want to get players off their wage bill when the transfer window reopens in January.

On Friday, Barcelona’s spending cap for the season increased by almost €800m to €656.5m following the sale of club assets this summer. That allowed them to spend more than €150m on new signings Robert Lewandowski, Raphinha and Jules Kounde in the transfer window, while Andreas Christensen, Franck Kessie, Hector Bellerin and Marcos Alonso all arrived on free transfers.

But the report says that Barca still need to get unwanted players off their wage bill if they are to invest in the squad again next summer.

Frenkie de Jong, linked with Manchester United and Chelsea in the summer, is a candidate, along with Jordi Alba, Gerard Pique and Memphis Depay.

12.40 BST: West Ham are being linked with a £12m move for Sheffield United defender John Egan.

The Sun reports that David Moyes has identified the 29-year-old as one of his key winter targets.

The Republic of Ireland international was wanted by the Hammers last month but a deal could not be agreed.

Rigg has been tracked by the Magpies all year, with the midfielder so impressive he has been playing for Sunderland’s under-18 side since the age of 14 — and now for the under-21s at the age of 15.

Everton have also been linked with Rigg, but the player’s family are all reported to be Newcastle fans.

Earlier this year it was reported that Sunderland were looking for a transfer fee of £1m, but that has now risen to £2.5m.

10.45 BST: Chelsea could turn to Luis Campos as their new sporting director to work with Graham Potter, reports the Sunday Times.

Potter left Brighton to replace Thomas Tuchel as manager at Stamford Bridge last week, and the club are restructuring from the top following Todd Boehly’s takeover earlier this year.

Campos only joined Paris Saint-Germain in June as the French club’s football advisor after making his name at AS Monaco and Lille. He also worked with Jose Mourinho during his time at Real Madrid.

09.48 BST: Wolfsburg forward Jonas Wind has said a move to Arsenal would be a “dream.”

In an interview with Bulinews, the 23-year-old said that his aim was to play in the Premier League, ideally for the Gunners.

The Denmark international joined Wolfsburg from FC Copenhagen in January, going on to score five goals in 14 games in the second half of the season.

“I’ve only been here for a bit more than a half year, and I’ve been happy with my time at the club so far, so I’m not thinking about a move away at all,” Wind said. “But If we look into the future, Arsenal would be a dream destination for me, as it has always been my favorite club.

“In general, I think the Premier League is the best league in the world, and it would be exciting to play there. But as I said, that’s not what I’m focusing on at the moment. I’m doing well here in Wolfsburg, it’s a good club for me, and the Bundesliga is a great league to play in.”

Igor, 24, has been in Serie A since 2019, with the Brazilian playing for SPAL before moving to Fiorentina two years ago.

The report says that a central defender is one of Juve’s key areas to strengthen in the winter window, with a replacement for Leonardo Bonucci still required.

Igor’s contract expires in the summer of 2024, so his transfer value will start to reduce after January unless he signs a new deal.

– Marco Asensio is being tracked by AC Milan and Juventus, according to Calciomercato. While the Rossoneri were linked with the 26-year-old Real Madrid winger over the summer, it looks as though they could now face a challenge for his signature. It’s reported that both clubs are considering waiting until January, when they will be able to begin negotiations with him over a possible precontract agreement as he enters the final six months of his contract — which would see him move on a free transfer next summer. Asensio has played just eight minutes in LaLiga this season.

– Uncertainty over the future of AC Milan forward Rafael Leao has emerged after initial contract talks, according to Corriere dello Sport. The 23-year-old is understood to be looking for a salary of around €6.8m per year, and the San Siro hierarchy are unsure whether to meet his demands. The Portugal international has been on the radar of Chelsea, and has two years remaining on his current deal.

– Carlo Ancelotti is in line to receive a new contract offer from Real Madrid, reports Marca. Club president Florentino Perez is happy with the 63-year-old manager, who secured the LaLiga and Champions League double last season, and is looking to tie him to a new long-term deal. His contract is set to expire in the summer of 2024.

– Manchester United passed on the opportunity to sign Sergino Dest on deadline day, according to The Athletic. The 21-year-old United States right-back joined AC Milan on a season-long loan from Barcelona, but an approach by Erik ten Hag was blocked by the Old Trafford hierarchy, who made the decision to keep faith in the club’s two current options — Diogo Dalot and Aaron Wan-Bissaka

– Lazio are keen on a move for Suso, reports Calciomercato. The Serie A club are considering an approach for him in January, and it is believed that Sevilla would be prepared to let the 28-year-old attacking midfielder leave amid concerns over his form. The former Liverpool star previously played in Italy’s top flight during a spell with AC Milan.