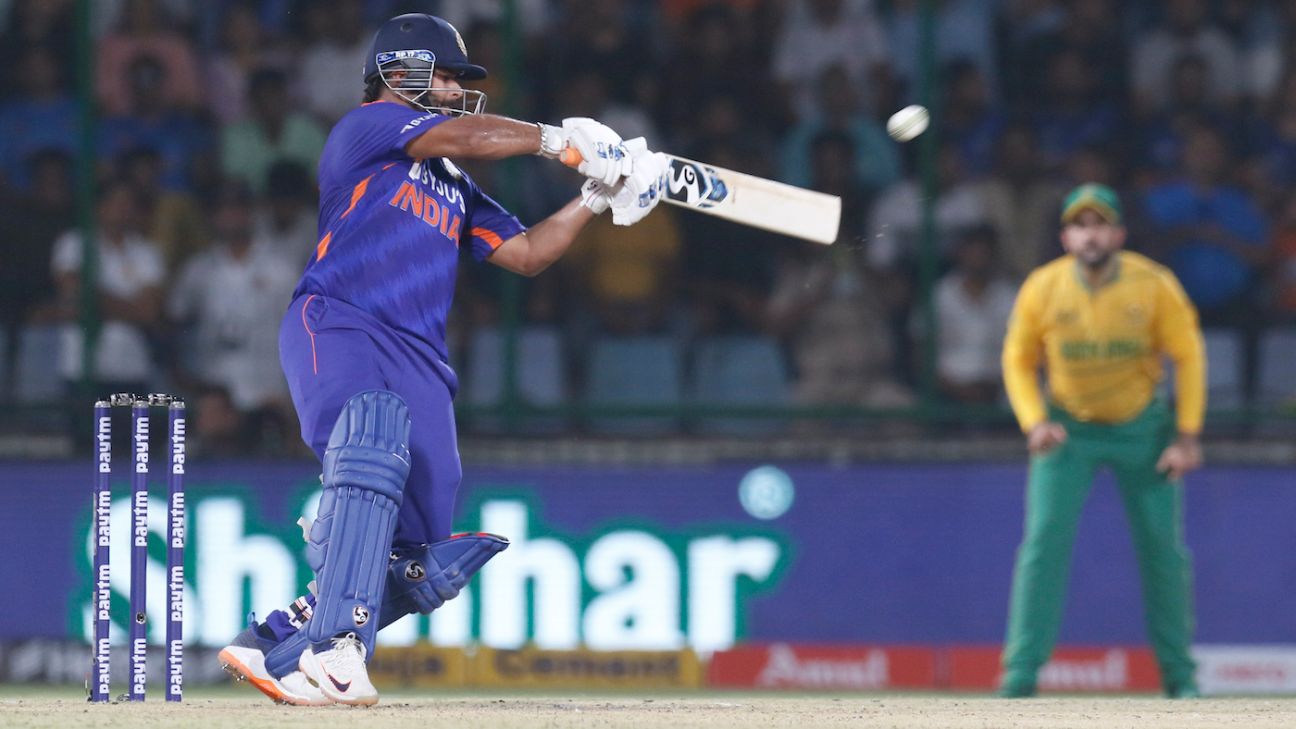 You could tell from the jubilation in Keshav Maharaj‘s run towards Temba Bavuma after dismissing Rishabh Pant in the fourth T20I in Rajkot that a plan had come off. In the 13th over of the innings, Maharaj bowled a fuller ball wide outside off. Pant, who was on 17 off 22 at that stage, threw his bat at it only to top-edge it to short third man.

But had you followed Pant’s previous dismissals in the series, you would have known that this was coming. In the second T20I in Cuttack, Maharaj had dismissed Pant with a similar wide delivery. It was the first ball of Maharaj’s spell. Pant had skipped down the track in a premeditated manner. Had he left it, he would have been stumped. So he reached out and got caught at deep point.

In the first T20I, too, Pant had fallen to a wide delivery, against Anrich Nortje. Even if you cut him some slack there, as that was the final over of the innings where he had to throw caution to the wind, the pattern persists as Pant has fallen to wide deliveries ten times in 19 T20 innings this year.

Former India captain Sunil Gavaskar, who was commentating on the match, said it was “not a good sign” that Pant was repeatedly falling into the same trap.

“He hasn’t learned,” Gavaskar said on Star Sports. “He hasn’t learned from his previous three dismissals. They throw wide, and he keeps going for it. He has got to stop looking to go aerial that far outside the off stump. There is no way he’s going to get enough on it.

“Ten times he has been dismissed wide outside off stump. Some of them would have been called wide if he hadn’t made contact with it. Because he is so far away, he has to reach out for it. He will never get enough power on it.”

At the post-match presentation, Pant was asked about the pattern of his dismissals. He said he could “look to improve in certain areas” but was “not thinking too much about it”.

But bowlers, both fast and spin, seem to have done their homework. Pant’s most productive boundary shots include the slog and the pull, but bowlers have learned not to feed him there. They are now bowling fewer balls at the stumps and instead go wide outside off, away from his hitting arc.

However, Dinesh Karthik‘s resurgence has started the debate that Karthik, and not Pant, should be India’s first-choice wicketkeeper in T20Is. Before the start of the South Africa series, the assumption was that if Karthik were to find a place in the playing XI, it would have to be as a pure batter. But now it could very well be Pant in that situation.

But apart from being the maverick he is, Pant has one more thing going for him: he is the only top-six contender, apart from Ishan Kishan, who bats left-handed. If India leave Pant out, the opposition could use a legspinner or a left-arm orthodox spinner to strangle a line-up comprising mainly right-hand batters.

India, though, need to evaluate how much they will benefit from Pant being a left-hand batter as compared to having a right-hand batter who otherwise might have better numbers.

But then, at the start of the series, Pant himself said, “The kind of batting line-up we have, leftie-rightie is not a big deal for us because we play spinners day in and day out.”