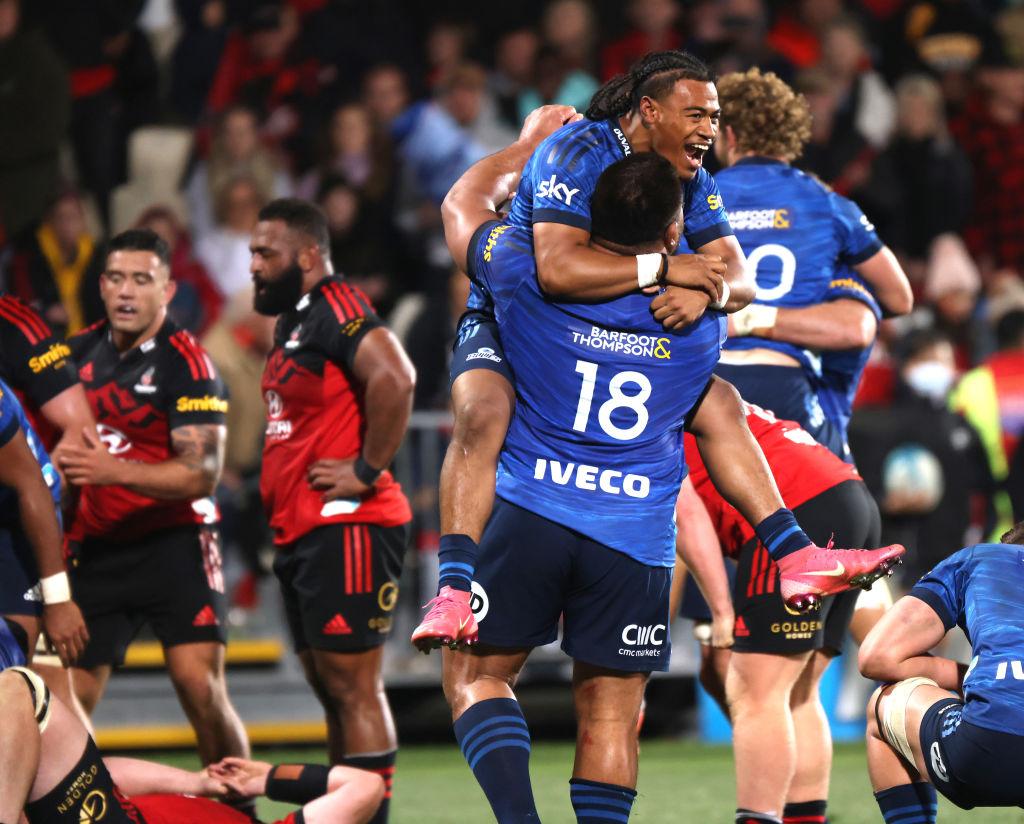 Etch Leon MacDonald’s Blues into folklore after this 27-23 victory.

History needs to be altered at some stage. Eighteen long years after Carlos Spencer instigated their last win against the Crusaders in Christchurch, the Blues broke their glass ceiling to make the most emphatic statement yet that they are the real deal.

Seven wins in succession; this easily their most treasured of that run.

New Zealand’s two premier teams, both with undeniable championship qualities, put on a show before their highly anticipated duel was marred, somewhat, by Crusaders captain Scott Barrett’s red card for his shoulder-to-the-head shot on Blues prop Alex Hodgman in the 46th minute.

The Blues, leading 17-7 at that stage, were in control as Beauden Barrett expertly pulled the strings but the justified dismissal swung the captivating contest in their favour.

Against a 13-man Crusaders side, with David Havili also in the bin, Blues hooker Kurt Eklund claimed his sixth maul try of the season to hand the visitors a 14-point lead that should have shut the gate.

The Crusaders, though, threatened a heroic comeback. Of course they did. Never, ever, write these blokes off.

Richie Mo’unga sparked the trademark response by pulling off a 50-22 which led to Sevu Reece’s try and a penalty then had the Crusaders within six.

After 13 straight losses in Christchurch, the Blues refused to let this chance slip.

Last year the Blues broke their 18-year title drought with transtasman success. Defeating the Crusaders on home soil after the same wait trumps that achievement.

MacDonald rated last week’s 25-0 shutout of the Chiefs in Hamilton as the best performance of his four-year tenure. He can now chalk up another new milestone.

In the closing stages the Blues were guilty of going into their shells and protecting the lead to allow the Crusaders to swarm.

Restored to their full contingent, the Crusaders came hard and fast at the Blues in the final 10 minutes. Will Jordan’s dynamic bust created Reece’s double but Mo’unga missed the crucial conversion that would have brought the Crusaders within a penalty of victory.

Referee Mike Fraser made a big call in the context of the match when, with four minutes left, he gave the Crusaders a five-metre scrum despite Jordan appearing to knock the ball dead following a charge down on Barrett.

Wave after wave of Crusaders attack followed at the Blues line. Desperate defence continued to repel them – Rieko Ioane and inspirational Blues captain Dalton Papalii stepping up to pull off a match-saving tackle on an unmarked Dominic Gardiner in the corner.

Still, the Blues had to defend one more raid. They eventually forced an error, and their emotional jubilation painted the picture of their significant achievement.

This match had it all; a worthy, gripping contest right to the end. The expectation now is we will see these two foes meet again in the final.

History seemed destined to repeat early when Jordan strolled over off a brilliant Havili skip ball but in a sign of things to come the Blues were undeterred.

With patient composure on attack and resolute defence, led by Papalii, the Blues carried their confidence and determination to the scene of so many recent failures.

In the first half the Crusaders lost collisions and lost the physicality battle, which largely had their lethal backline attempting to play off slow, static ball.

Barrett had his first two kicks charged but, as he settled into the game, his influence steadily grew.

The All Blacks centurion laid down another marker by setting up two tries – the first with a lethal step and break up the middle of the park, with Finlay Christie dotting down from the resulting ruck.

Barrett then orchestrated a short side play where a subtle show inside sucked in two defenders to send Papalii steaming through Mo’unga and Bryn Hall to the line.

Despite the Crusaders dominating the set piece, the lineout especially where they won two against the throw, the Blues’ 17-7 halftime lead should have been larger.

Stephen Perofeta demonstrated his silky skills from the back by catching the Crusaders napping with a quick tap just before the break that finished with Havili being sent to the bin for raking the ball away from Perofeta on the ground.

Those did not prove costly in the end, though, as the buoyant Blues march on to make history.