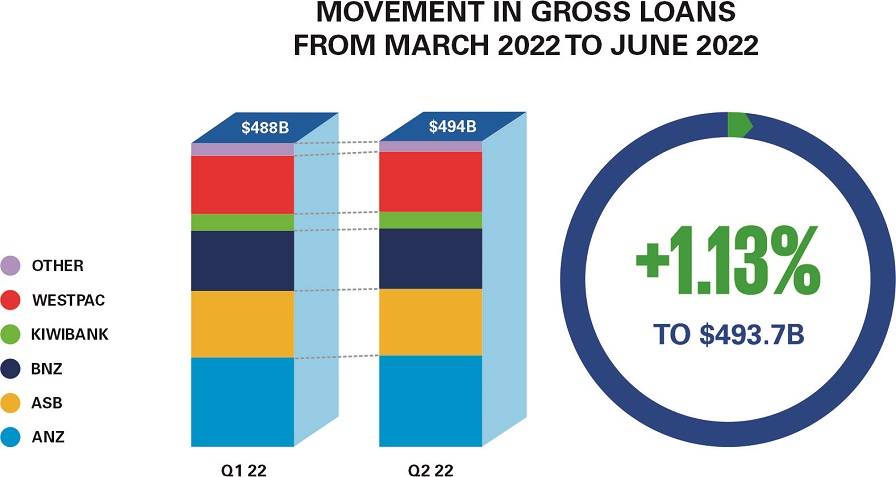 The banking sector made a healthy $1.73b in profits in the three months to June, albeit down slightly on the record $1.74b set in the March quarter.

While growth in the mortgage market is slowing, rising interest rates have allowed the banks to widen their net interest margins, KPMG says.

“The net interest margins of the big five banks were each the highest that they have been since at least June 2019, with increases of approximately 10-30 basis points between March 2022 and June 2022 alone,” the report said.

Banks were able to manage the timing of repricing their loans and gain the benefit of widening margins, KPMG banking partner John Kensington said.

“I suspect a lot of these banks have some borrowings that are fixed, whether the borrowing itself is fixed, or they’ve borrowed floating and then done a swap to get it to fixed, where they haven’t seen an increase in their cost of funds yet.

“So, the borrower’s new rates might have gone up, but they’ve still got some money from that old pool, if you like.”

The financial institutions were well managed businesses which had been positioning themselves for rising interest rates for some time, he said.

While new home lending was down 29% year-on-year, the sector’s overall loan book grew 1.1% in the quarter to $494b, the survey showed.

A continued brake on mortgage growth was tighter lending restrictions under the Credit Contracts and Consumer Finance Act (CCCFA), with the banks complaining that recent tweaks by the government were not having an effect, Kensington said.

“The CCCFA is still an untested area, and it is an area that the banks are being careful in.

“At the same time, rising interest rates are focusing their minds on what people can afford, so that the minor tweaks to the Act have not turned the tap back on.”

Conversely, one of the factors holding up the size of the banks’ mortgage business would be homeowners not voluntarily paying off more of their loans than they had to, due to cost of living pressures, he said.

The sector’s ratio of operating expenses to operating income reached a five-year low last quarter, a sign of banks tightening their belts, but this could not go on forever, Kensington said.

They had large cost bases and major projects on the go, and like most industries would be hit by higher staff costs.

The sector’s positive results still didn’t reflect the economic and regulatory changes which were having an impact on the wider economy, he said.

“It is hard to believe this will continue, given the current economic environment.”

The post-Covid economic effects were yet to be fully felt, he believed.

There were a lot of companies operating at 85-90% capacity because they couldn’t get staff or resources.

“The revenue they’re missing means that they’re barely breaking even.