The Aboriginal Flag will permanently fly on the Sydney Harbour Bridge by the end of the year after the New South Wales government committed $25 million to install a third flagpole.
NSW Premier Dominic Perrottet today said flying the Aboriginal flag alongside the Australian and NSW state flags was an important gesture towards closing the gap.

He said the costings to fly the flag year-round would be included in Tuesday’s budget.

“Our Indigenous history should be celebrated and acknowledged so young Australians understand the rich and enduring culture that we have here with our past,” Perrottet said.

“Installing the Aboriginal flag permanently on the Sydney Harbour Bridge will do just that and is a continuation of the healing process as part of the broader move towards reconciliation.

“We are making significant investments, adopting new approaches and taking practical steps to close the gap and improve outcomes for Aboriginal people across NSW.”

The flagpoles are 20 metres high, the same as a six-storey building, and the flags will require an attachment strong enough to withstand all weather conditions. 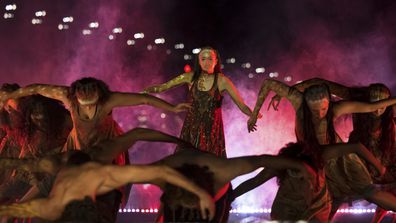 “I am so excited we are one step closer to the Aboriginal flag finally being flown on the Sydney Harbour Bridge permanently, 365 days a year, seven days a week,” he said.

“We are incredibly proud to be working in partnership with Aboriginal stakeholders on both symbolic and practical reconciliation.”